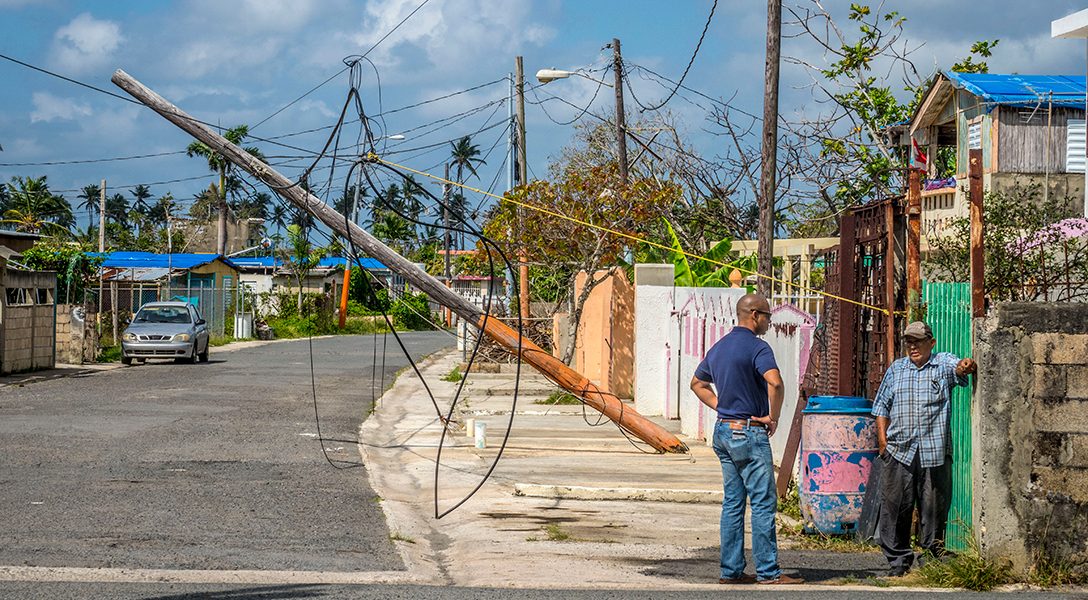 Puerto Rico suffered another island-wide power outage this week — seven months after it was hit by Hurricane Maria. This new setback highlights a trap the island finds itself in: forced to repair an antiquated power grid dependent upon imported fossil fuels, with no real hope of adopting new technologies that Americans on the mainland take for granted.

The problem is legislative. The Robert T. Stafford Disaster Relief and Emergency Assistance Act sets the terms for how emergency funds are allocated, and dictates that infrastructure must be restored to its original state after a disaster. That, in effect, precludes improvements. The Puerto Rican government is also dragging its feet regarding legislation for renewable energies.

As Puerto Rico’s power supply was substandard before the hurricane wreaked havoc with it, the US Army Corps of Engineers finds itself having to repair equipment so outdated that replacement poles and other parts have to be custom-made. This has added delays to restoring power to the islanders, and blocked any possibility of adopting innovative solutions such as solar arrays and advanced battery storage.

The pre-Maria grid was in such disrepair because Puerto Rico’s power company, PREPA, was $9 billion in debt and had stopped maintenance work to save money — a misguided strategy that has had disastrous consequences.

Related: Puerto Rico Is Bankrupt: Is the Worst Yet to Come?

Hurricane Maria delivered a one-two punch: flooding the power stations and ports on the south side of the island where it made landfall, then decimating trees all over the island, including under-maintained trees close to power lines that PREPA had neglected to cut back. The flooding wouldn’t have been so hard to deal with, but fixing snapped lines and poles all over the mountainous island has been difficult and frustratingly slow.

PREPA, which has declared bankruptcy, is now to be sold into the private sector. The island’s governor, Ricardo Rossello, announced in January that the transition will take 18 months to complete and no doubt lengthen the island’s recovery time.

Puerto Rico has state wide black out – BUT https://t.co/ZlAdFdQEAM solar+storage systems are up and powering 3 fire stations ! @lightempowered https://t.co/Asf3gmUnBc

While PREPA and the Army have had to work on repairing original infrastructure, non-governmental groups on the island have seized the opportunity to make sustainable improvements. Empowered By Light, a nonprofit based on the mainland and founded by an ex-Tesla executive, has so far equipped three of the island’s fire stations with solar panels and water desalination pumps.

Casa Pueblo is an environmentally minded community center which has been working for decades to highlight environmental issues on the island, including how useful solar power can be to Puerto Ricans. Director Arturo Massol said the center “has been running on solar power since 1999, so we’re not new in this. After the hurricane, our facilities were intact, as well as our energy system.” The center allowed locals to charge medical devices and phones in the aftermath of Maria, and its solar array creates extra power which goes back into the system.

Many states on the mainland have created incentives for ordinary citizens to take up solar by providing grants to buy arrays and through SREC payments — Solar Renewable Energy Credits, where one credit is created for every megawatt hour (MWh) of electricity produced by a solar generator. Puerto Rico’s government hasn’t yet approved regulations for supply of excess power into the grid. Any government plans to help ordinary citizens with the cost of renewable energy infrastructure are a long way off.

The first video from PBS shows Col. John Lloyd of the US Army Corps of Engineers explaining what he has been working on, and documents Casa Pueblo’s efforts to spread the use of solar.