The people of Puerto Rico have no say at the moment in the future of their debt-ridden island. The price of surviving bankruptcy has been a surrender of sovereignty to a federal oversight board that will control every law and every budget for years to come. That’s the story behind headlines heralding an “escape from disaster” and “second chance.”

Puerto Rico owes roughly $74 billion to bondholders and $49 billion for public employee pensions. It is the worst meltdown in the history of America’s bond market.  “There is no US precedent for anything of this scale or scope,” according to a report by former World Bank economist Anne Krueger.

In response, Congress enacted a new form of bankruptcy for the island last year (the PROMESA act). It empowers a seven-member Financial Oversight and Management Board – the “junta” as the Puerto Ricans call it – to override Puerto Rico’s democratically elected government.

Juan Torruella, an Appeals Court judge who was born on the island, calls the imposition of the junta, “the most denigrating, disrespectful, anti-democratic, and colonial act in our entire history with the United States.”

At the junta’s request, Puerto Rico entered a form of bankruptcy on May 3 and Supreme Court Chief Justice Roberts appointed a bankruptcy judge, Laura Taylor Swain. She held her first meeting in the capital of San Juan on May 17.

Swain told a packed courtroom that bankruptcy “will certainly involve pain.” In fact, the debt payments leading up to Puerto Rico’s bankruptcy have already created a tax burden that is 10 times higher than the average in a US state – $15,637 for every man, woman and child on the island.

For years, working and middle-class Puerto Ricans have been paying out an increasing share of their incomes to bond-holding investors.

The board/junta has forced a 10-year fiscal plan on the Puerto Rican government, imposing extreme austerity on the island’s shrinking economy, which has been in recession for 9 of the past 10 years.

“You have an oversight board exercising governmental powers over the Commonwealth of Puerto Rico during its period of distress,” explains Carlos Cuevos, a New-York based bankruptcy lawyer of Puerto Rican descent, “and it will be for years to come. A lot of Puerto Ricans feel disenfranchised.”

The Board’s plan will cut $1 billion from healthcare, $300 million from education (closing almost 200 schools) and $200 million from a severely underfunded pension system. The University of Puerto Rico’s budget will be cut in half, losing $450 million.

“Hopefully, several years down the road, we will start to see growth and a new economy,” commented board member David Skeel.

It’s hard to see how the board/junta’s plan will help Puerto Ricans get out of the situation it calls “staggeringly grim.” The unemployment rate is already nearly twice the average of the rate in US states. Almost half of Puerto Ricans live below the poverty line. Even contributors to the websites of the American Enterprise Institute and Forbes are dissing the “draconian” plan as “doomed.”

In the meantime, there is a real risk of a mass exodus of Puerto Ricans to the US that will push the island’s economy into a death spiral.

“The Board — seemingly lacking both any understanding of basic economics and democratic accountability… would turn Puerto Rico’s recession into a depression…  comparable to the experience of countries undergoing civil wars, or that of crisis-ridden Venezuela.” 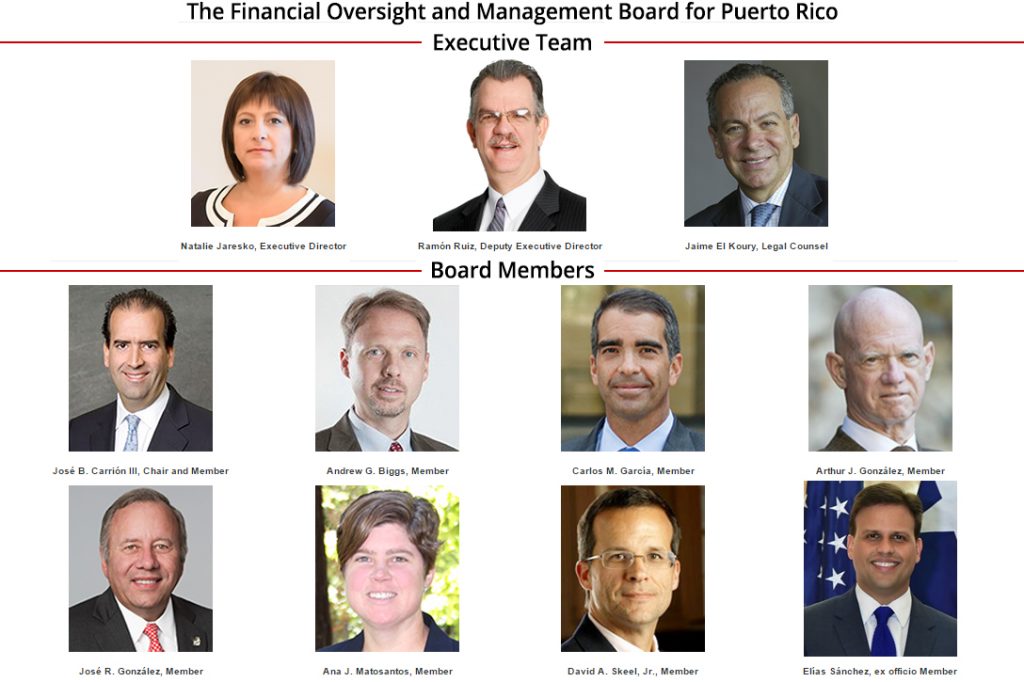 The crisis, according to the Board is “about to worsen exponentially,” due to the loss of funds from the Affordable Care Act.

A lot of Puerto Rico’s debt, as much as 25 billion, was incurred in meeting health care costs.

In 1968, Congress did for overseas territories like Puerto Rico what Speaker Paul Ryan (R-Wis) and other Republican lawmakers want to do for all of America — cap federal funding for Medicaid.

Ever since, Puerto Ricans have been paying more for less. They pay the same Medicare taxes and Social Security taxes as other Americans —  but receive a fraction of the funding of a US state.

Starting in 2010, Affordable Care Act’s grants provided some temporary relief. But the money has almost run out.

Like the former emergency managers in Flint, Michigan, who put more than 8,000 children at risk, the unelected members of the Financial Oversight and Management Board wield the power to cut costs regardless of its impact on public health.

There are potentially catastrophic consequences not only on the island but globally, because Puerto Rico is a breeding ground for the Zika virus.

The word “jobs” occurs exactly once in the Board’s 10-year plan for Puerto Rico — in the questionable claim that privatizing the island’s infrastructure will create employment. Otherwise, it has almost nothing to say about growing the economy or “priming the pump,” to use the Keynesian metaphor Trump claims to have invented.

Under pressure from the Board, Governor Ricardo Rosselló is getting ready to sell off a long list of public assets. Officials in his administration “…have identified at least 30 projects that would benefit from being run by a private company,” according to an Associated Press article.

Outside investors could take control of the island’s roads, airports, schools, and hospitals, as well as electrical power and the water supply. The privatization wave also risks unleashing new incentives for corruption on the part of public officials.

Goldman Sachs and Spanish partner Abertis are already in charge of the busiest highway on the island, PR-22, keeping 75% of roughly $90 million annually in toll revenue. A former governor, Luis Fortuño, sits on the board of the road he privatized. 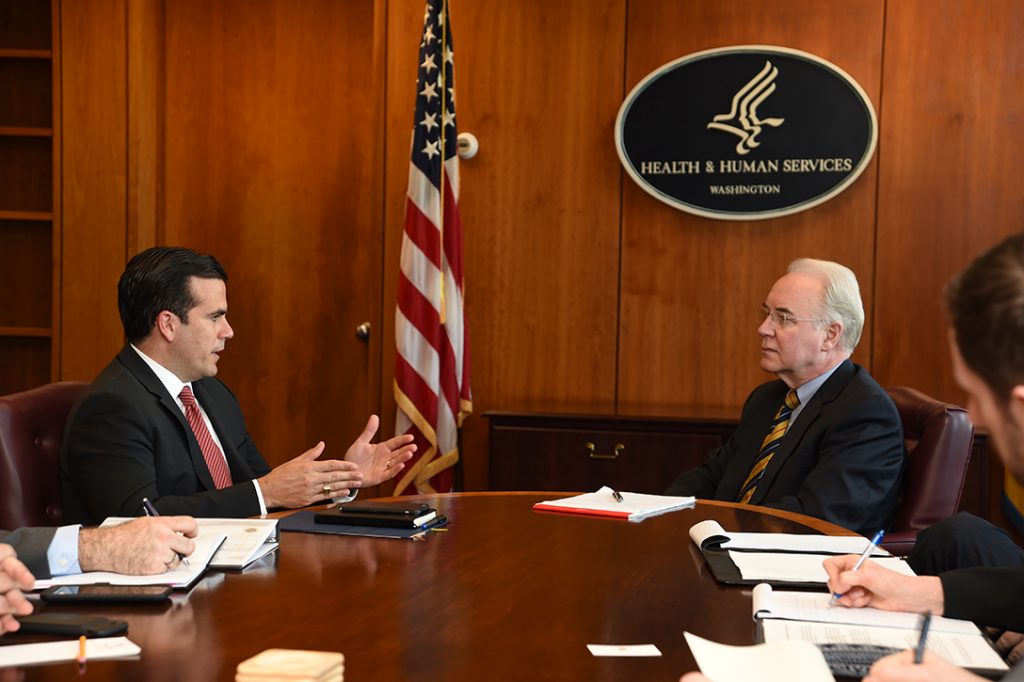 “Architects of the Debt Crisis”

Two of the Board’s members – José Ramon Gonzalez and Carlos García — served on the board of Banco de Santander, one of the bank’s that profited the most from Puerto Rico’s dire straits.

A report by the activist group Hedge Fund Clippers claims that they were “architects” of the debt crisis, helping shackle the government with predatory debt at exorbitant interests while working for Santander, which extracted an unheard of billion dollars in fees for its services.

García later stepped through the revolving door to became president of the government entity, the Government Development Bank, that was issuing many of Puerto Rico’s bonds.

Missing from the board’s personal financial disclosure reports is fact that García is currently chair of the Caribbean Financial Group, which makes high-interest “unsecured personal loans …to individuals who may have limited access to consumer credit.”

Carlos García has not publicly responded to these revelations or to calls for his resignation.

Many Puerto Ricans have taken to the streets demanding an audit that could lead to prosecution of those who sold out Puerto Rico to predatory lenders.

A preliminary report by Puerto Rico’s Debt Audit Commission and a study issued by the ReFund America Project concluded that much of Puerto Rico’s bond debt might have been issued illegally.

The ReFund America Project report, based on bond data from Bloomberg, shows that Puerto Rico is paying $33.5 billion to borrow $4.3 billion in principal – an interest rate of 785%.

“We need a full audit of the debt to really understand how much the debt is. The numbers put out by the Commonwealth don’t jibe with what’s out there in the market,” the report’s author, Saqib Bhatti, told WhoWhatWhy.

But the Debt Audit Commission now seems unlikely to fulfill its mission. Puerto Rico’s governor, Ricardo Rosselló, has cut its funding, although citizens groups like “No Payment without Auditing” (No Se Puede Pagar Sin Auditar) are trying to crowdfund its work.

What has been revealed so far is that a lot of Puerto Rico’s debt is not borrowed money so much as future bank profits.

A major chunk consists of capital appreciation bonds – a Wall Street “innovation” outlawed by a number of US states, such Michigan and Ohio. In coming decades, hundreds of American cities could face municipal bankruptcy because of similar loans.

The bonds are a ticking time bomb of “capitalized interest” — meaning unpaid interest is relentlessly tacked on to the amount owed and the borrower pays ever more interest on the interest.

Seven Democratic senators have called on the Securities and Exchange Commission to investigate potential misconduct surrounding Puerto Rico’s bonds. But it seems unlikely that Jay Clayton, Trump’s appointee to head the SEC, will take action. He is a former Wall Street lawyer with close ties to Goldman Sachs. 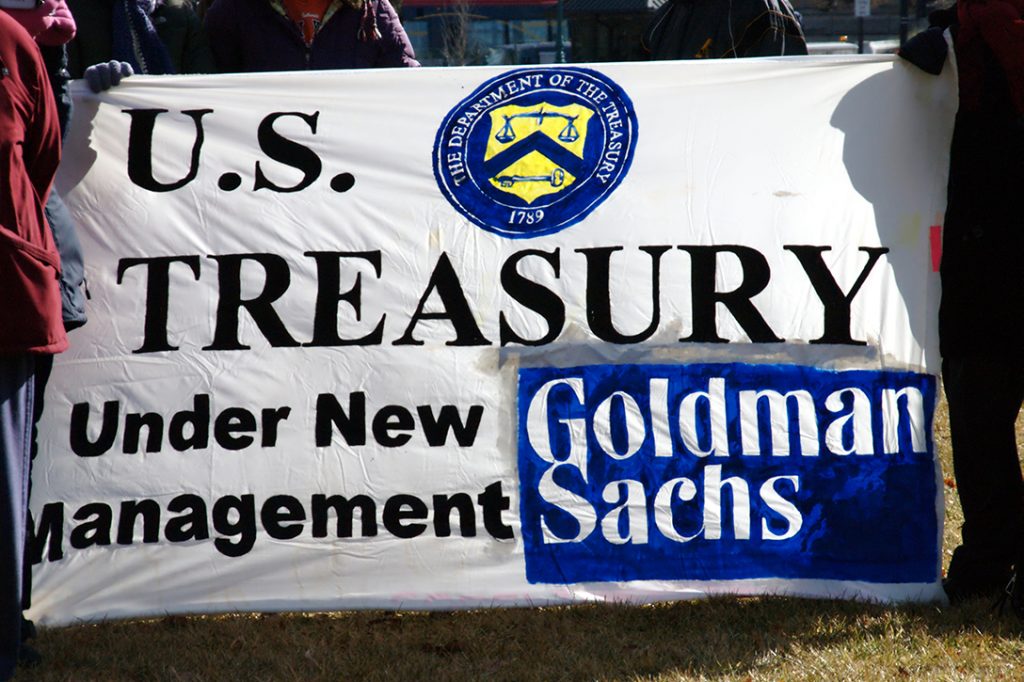 Eric LeCompte, of the religious development group Jubilee USA, argues that putting the federal government in charge was the price of saving Puerto Rico from “vulture capitalists” — hedge funds that buy billions in defaulted debt for pennies on the dollar and then sue for repayment of the bonds in full.

“The bankruptcy process shows there is light at the end of the tunnel,” LeCompte told WhoWhatWhy. “But things are going to get worse before it gets better; that has to do with the economy and how different austerity policies are enacted or not enacted.”

Bernie Sanders, by contrast, was strongly opposed to the PROMESA bill (“you cannot get blood from a stone”) and pushed an alternative plan that would cap payments to vulture funds, give Puerto Ricans access to the federal earned-income tax credit (EITC) and parity in Medicaid benefits while making long-term investments in highways, trains, ferries, broadband and renewable energy.

Saqib Bhatti says what’s happening in Puerto Rico “subverts the original intention of bankruptcy – it was supposed to be a place for a debtor to restructure debt without flushing the entire community down the toilet.”

Ironically, for some of America’s wealthiest and most politically connected citizens, Puerto Rico really is “treasure island.” Former governor Luis Fortuño passed a set of laws in 2012 turning Puerto Rico into a domestic tax haven. Americans who move themselves and their companies to the island for at least six months of the year pay no federal income or capital gains taxes.

While Puerto Ricans are forced to flee, superrich Americans like hedge funder and Trump donor John Paulson can move to “beautiful” Puerto Rico and pay almost 0% tax on most of their wealth.

From a May 1 general strike to students closing down Puerto Rico’s university, there have already been massive anti-austerity protests mostly ignored by the US mainland media.

“This Board could lead to unintended consequences and violence in Puerto Rico,” warns Judge Juan Torruella of the US Court of Appeals for the First Circuit, which covers Maine, Massachusetts, New Hampshire, Puerto Rico and Rhode Island. Puerto Ricans, he adds, “must organize a movement of civil resistance.”

He is calling for a complete boycott of US chain stores in Puerto Rico: “The most effective way to get their attention is through their pockets…and so we should organize an economic boycott.”

For allies in the struggle, Torruella looks not only to the Puerto Rican diaspora but to the entire Latino community in the United States.

“Today, this is the biggest minority in the country and its support could be decisive in the future of the US.”