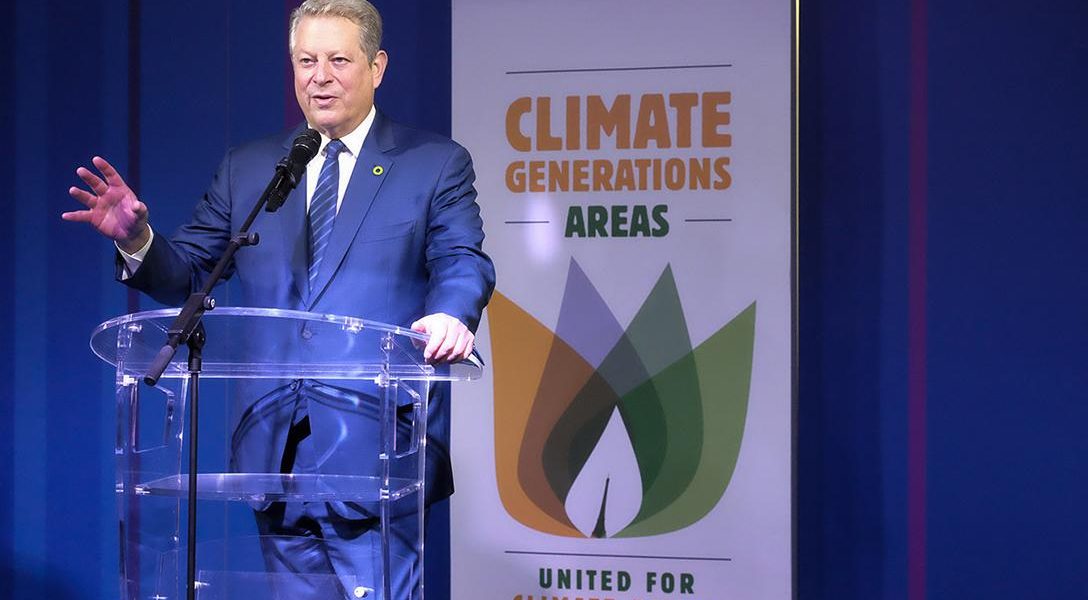 To many Americans, Al Gore is an overweight lightweight, a serial exaggerator and bragger of no real consequence. Problematically, those same people also think that talk about Climate Change is so much hot air.

Today, on the tenth anniversary of a pronouncement from the world’s leading climate scientists that global warming is a serious threat to humankind, is “very likely” caused by humans, and will be unstoppable for centuries — I’d like to introduce the skeptics (and the rest of us) to an essential film which, I believe, will disabuse folks on both accounts. It’s called An Inconvenient Sequel: Truth to Power, and is a clever twist on its equally cleverly titled 2006 parent film, An Inconvenient Truth.

That documentary arguably did as much as any single source to wake people up to the reality that humanity is doomed unless we take drastic action.

Now, I understand how some folks can believe that 99% plus of scientists are flat wrong about the onrushing disaster of Climate Change. Or that this disaster is primarily caused by humans. I watched An Inconvenient Sequel at the Sundance Film Festival, in Park City, Utah — a ski resort which, as the festival was getting underway, experienced one of its most abundant snowfalls in recent memory.

At breakfast each day at the lodge where I stayed, I overheard the affluent red-state skiers watching the morning news and grumbling about the Women’s March and other alarms over Trump, and looking forward to their day gliding through mounds of powder. I heard not one of them express any concern or awareness of Climate Change or its deadly corollary, Global Warming.

Because, what warming? It was cold enough to make a whole lot of snow.

That’s where a film like An Inconvenient Sequel comes in. Through a masterful combination of just enough science and statistics, persuasive documentary footage and time-lapse photography, and a well-narrated story of one man doing something on behalf of us all, it makes a case that almost no one can dispute — if they watch it.

Admittedly, it seems a little self-serving that Gore himself is the storyteller and the main character. But why not? It is his story. He, as much as anyone, has led the effort to save the world while there is still time.

And make no mistake: there is very, very little time left. 2016, like the two preceding years, was the hottest year globally on record.

Yet, what this documentary and the work of this man shows is that, as the title reminds us, it’s remarkably easy to deny reality when it is simply “inconvenient.” In ignorance resides a kind of comfort, however short-term.

Perhaps that works with a lot of things — injustice, poverty, isolated environmental desecration — but it doesn’t work when we’re all in the same boat, and that boat is going down fast.

Those who doubt it will have a conversion experience when they hop aboard a helicopter with Gore and travel to Greenland, where in front of our eyes, massive ice boulders crash into new rivers, rapidly diminishing the ice cap and raising sea levels.

Those who doubt it will have their eyes opened when they join Gore in touring the (recurrently) flooded streets of Miami Beach, or listen to the mayor and others talk about their losing battle to save the town. And about their Florida governor, another denier who sits on his hands.

Those who doubt it will feel abashed when they travel with Gore to the Paris Climate Talks, where everyone from countries around the world — who seemingly cannot agree on anything else — all say they get it.

As for Gore himself, there’s no question the film adds to his luster as a politician who went on to infuse his life, and ours, with extraordinary substance. And why not? One is particularly struck by a segment in which Gore seemingly single-handedly saves the Climate accord.

When the Indian prime minister balks at signing the treaty, noting that his country is still plunged in poverty and a substantial minority of its population still has no electricity, Gore jumps into action.

Calling the head of the leading provider of solar energy, the California-based company SolarCity at home and at night, he persuades the hesitant CEO to offer India some sort of inducement in terms of free technology — and India then reverses itself and signs on with all the other countries.

If you can watch this with a dry eye, you have a hard heart.

If none of this is persuasive, the filmmakers still have a card up their sleeves: the mayor of one of the reddest towns in America, a conservative Republican who has decided that, yes, Climate Change is real, and yes, he is going to do something about it. He has put Georgetown, TX, on track to become the first Texas city running on 100% renewable energy.

As he says, “It’s just common sense…The less stuff you put in the air, the better it is.” And, notwithstanding longtime claims that solar and wind will always be more expensive than fossil fuels, Georgetown can already get renewable power cheaper.

And larger towns and cities and states and countries are following suit. Rockport, Missouri, for instance. In 2011, it became the first city in the US to be 100% powered by wind energy. Other cities in that wind-rich region are expected to follow their example. And please go here to see how the use of solar energy is growing, in the sunbelt, as you might expect, and even in not so sunny places. Also please see our story, Can the Koch Brothers Block the sun? An Experiment in Iowa, about a school superintendent who cut his school’s electric bills by 90% by converting to solar power — and how the fossil fuel industry reacted to this inconvenient turn of events.

As An Inconvenient Sequel makes clear, it is almost too late to save ourselves. Almost. Gore says he still has hope, because of the speed at which some are taking action to stem warming from fossil fuels.

Gore himself has been running trainings worldwide for people who return to their countries and organize for climate and renewable-energy action. That, alone, makes him a global hero.

As for the future, it’s touch-and-go. The planet is on life support.

But what Gore, now 68 and a self-described “recovered politician” is doing — what we all must now be doing — is worth the effort. Because….what is the alternative?

Gore notes that while the media covers Climate Change, it has failed to do so in the sustained way that will make a difference fast enough.

At WhoWhatWhy, we agree. We don’t even remember hearing from the media about many of the things mentioned above.

We think about: what if the media covered Climate Change the way they did the battle for the White House? Or the Super Bowl title?

We’re small, and our resources are limited. But we’re getting ready to launch our own effort to sound a still stronger alarm, and produce the kind of reporting breakthroughs that can mobilize the citizenry to the heroic effort required of all.

Will you join us? Write me directly and tell me how you would like to help.