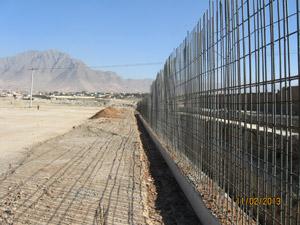 Did US taxpayers foot the bill for this unfinished slaughterhouse? Photo credit: Special IG for Afghanistan Reconstruction / Flickr
Government Integrity

Who Wants to Be a Millionaire — Afghanistan Reconstruction Edition

Did US taxpayers foot the bill for this unfinished slaughterhouse? Photo credit: Special IG for Afghanistan Reconstruction / Flickr

An Afghan contractor managed to get paid more than $1.5 million — just to build parts of a wall, a water well and a column to support a guard tower. All of this was part of a $12-million slaughterhouse construction project that was then … discontinued. This fiasco was revealed in a new report from the Office of the Special Inspector General for Afghanistan Reconstruction (SIGAR), an outfit that regularly cranks out reports about mind-boggling inefficiency, waste and corruption — reports that are largely ignored.

Project Was Epic Fail from the Start

The slaughterhouse turned out to be unnecessary because an expected increase in Afghan National Army troop strength never materialized, and an existing facility could handle the demand.

The facility would have butchered common sense in any case. In its recommendation to terminate the project, the Combined Security Transition Command–Afghanistan (CSTC–A) noted that the planned slaughterhouse would have included refrigerated storage. The problem is that “the Afghans do not typically refrigerate meat, instead preferring fresh meat.”

Even if the Afghans had wanted refrigeration, the recommendation noted they “have demonstrated an inability to successfully maintain refrigerating equipment in the long term.”

Had the slaughterhouse been finished, it would likely not even have been used by the local community. Photo credit: USAID Afghanistan / Flickr

In any case, the whole thing was not, in a manner of speaking, Kosher: “When the slaughterhouse was first put out for bid it called for modern equipment that would not be considered halal and would not be used.” Halal refers to dietary regulations in accordance with Islamic law, in this case meat that has been butchered appropriately.

So the proposed slaughterhouse turned out to:

• Not be needed in the first place;

• Feature refrigeration capacities the Afghans had no use for; and

What does the military say about the decision to scrap construction?

Putting a positive spin on the mess was clearly a priority. “Let’s make sure your report recognizes the savings here while attempting to find fault with the requirement,” US Army Major General Todd Semonite stated in a handwritten note to SIGAR. “Looking forward to your continued partnership as we both work to ensure fiscal discipline.”

All this begs a larger question about such waste and incompetence, which, according to SIGAR, seems more the norm than the exception: Why do we continue tossing billions after billions down a sinkhole? Because the people in charge think no one is looking?

As WhoWhatWhy previously reported, out of $56 billion that the Department of Defense has spent in Afghanistan, only $21 billion can be accounted for. Then again, if US companies can get a big enough stake in Afghanistan’s vast mineral resources, it’ll at least have been worth it to … somebody. Just not the American taxpayer.

And not the average, suffering Afghan.

So what exactly does $1.5 million buy in Afghanistan these days? These photos of the construction site show the amount of work the contractor, AREEB-REC Joint Venture, did for the money. And the story doesn’t end there. The contractor is requesting an additional payment of $4.23 million for work already completed. A decision on that request is pending.

There is one great success story in Afghanistan, which naturally is not run by western contractors but by Afghan civil society, i.e. Afghan run nonprofit NGOs:

“The Special Inspector General for the Afghanistan Reconstruction (SIGAR,) established by Congress in 2008 to evaluate the efficiency of reconstruction programs in Afghanistan,
has issued a glowing report on the Afghan-run National Solidarity
Program (NSP) which has implemented over 45,000 small-scale
infrastructure and employment-creation projects since its inception in
2002. Grants to villages averaged $35,000 for tools, materials, wages
of around $5 per day, and technical assistance for water, sanitation,
secondary road improvement projects, as well as schools, canal-clearing,
and irrigation.”
http://www.truth-out.org/news/item/1414:us-special-inspector-gives-glowing-report-on-afghanrun-development-program

The author should note that not all aid to Afghanistan is a waste. The problem arises when the main contractors are western corporations like Louis Berger who then farm it out to cronies and hacks.

If it helps send the US broke, maybe we’ll get some peace in many places around this world? Not likely, but one can hope!

It appears Areeb Rec has a Facebook page. https://www.facebook.com/AreebRec/info