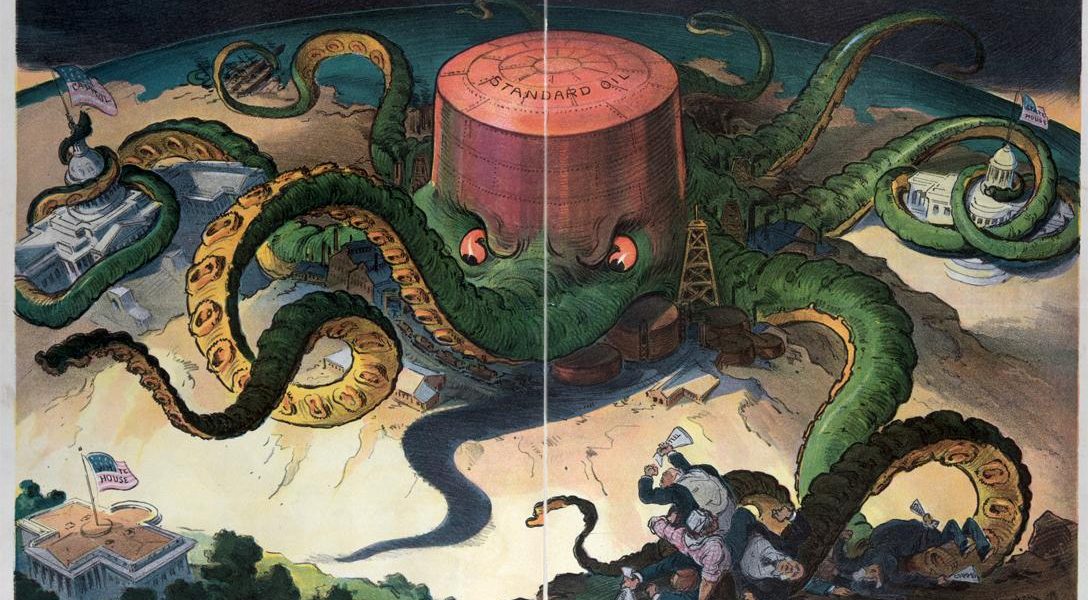 The Illustration shows a "Standard Oil" storage tank as an octopus with many tentacles wrapped around the steel, copper, and shipping industries, as well as a state house, the U.S. Capitol, and one tentacle reaching for the White House. Published September 7, 1904.  Photo credit: Puck / Library of Congress
Government Integrity

The 1% Versus the 99%: Realignment, Repression or Revolution

The richest 20 Americans now own as much wealth as the country’s poorest 152 million people combined.

That is just one of the findings of noted inequality scholar and author Chuck Collins’s most recent report, “Billionaire Bonanza, The Forbes 400 and the Rest of Us.”

In a wide-ranging interview, which will be available in its entirety as a podcast tomorrow, Collins likened the current situation to the “Gilded Age,” the time just before the turn of the 20th century, when there was a similar accumulation of wealth at the top and political power was concentrated in the hands of a few rich men.

And Americans are slowly realizing that the extreme accumulation of wealth at the very top is hurting their own prospects.  But grassroots efforts to redress economic inequality must contend with the political power that comes with great wealth.

Wages have now been stagnant for three decades and the median wealth of Americans has actually declined since 1990. At the same time, the rich have gotten richer. A lot richer.

This is an unstable situation. With pressure building for change but potent forces stacked against it, there are only three options, Collins told WhoWhatWhy: “Realignment, revolution or repression.”

Rules Rigged, and the Rich Get Richer

Back in the Gilded Age, the country managed to convert the pressure that was building from the bottom up into meaningful changes that resulted in a realignment of political power and the rise of the middle class. Those gains, however, are now being reversed. In fact, a new report found that, for the first time in decades, the middle class no longer constitutes the economic majority in the United States.

The shift toward increasing inequality began in the 1970s. At that time, Collins says (and research shows), “we stopped being an economy in which most people grew together” and instead became a “society that is dramatically pulled apart.”

Wages have now been stagnant for three decades and the median wealth of Americans has actually declined since 1990. At the same time, the rich have gotten richer. A lot richer.

Like the Great Depression in the early 1930s, the economic crisis of 2008 has been a wake-up call for the country. Polls historically have shown that people are indifferent to great wealth as long as they feel the rules are fair and that they at least have the option of moving up the ladder. But for many, the latest crash is changing that perception.

“In the economic meltdown of 2008, people realized the rules are rigged, that the big financial industry people … are tipping the scale in their favor,” Collins said. This has led to a perception that upward mobility in America is stalled — a perception supported by statistical data.

Collins believes that this sentiment has helped boost the candidacies of presidential hopefuls as diverse as Donald Trump and Bernie Sanders.

The collapsing middle class, including groups like recent college students whose prospects are blighted by crushing debt burdens, represents an “angry and mobilized constituency.” These are the people whose dissatisfactions are articulated by populists like Trump.

At the other end of the spectrum, the success of self-avowed “democratic socialist” Sanders shows how fluid the situation is. Collins pointed out that the Vermont senator has been saying the same things for 30 years — but only now are they resonating with a larger proportion of the electorate.

Collins pointed out that Sanders is the only major candidate who does not need a billionaire bankrolling his primary campaign to do well in the polls.

One bloc of voters who can cause a tectonic shift in the near future are millennials, many of whom are resentful of the obstacles they face in pursuing the American dream while paying off their college loans. With 40 million households shouldering a burden of $1.2 trillion in college debt, Collins believes that if this segment of the population were to organize, they could force significant change.

“Otherwise, the machinery of inequality will just keep chugging along as it currently is and it will get more concentrated,” Collins said. In any case, all of the ingredients are there for a major political realignment.

“We’re headed for a showdown.”

Listen to Chuck Collins discuss these and other issues with Radio WhoWhatWhy’s Jeff Schechtman tomorrow.