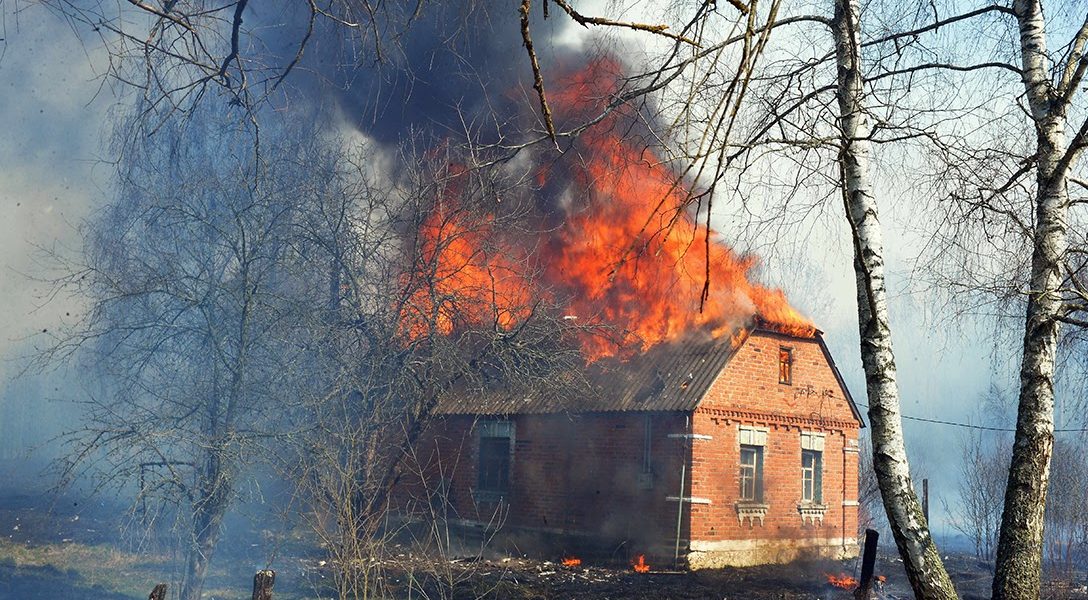 But they still breathed the world’s most polluted air and often woke up at night fighting for breath and watching the milky-white smoke crawl into their apartments.

“It felt like a gas chamber the size of a city, with no way out,” Alevtina Semashko, a 29-year-old housewife and mother of two, told WhoWhatWhy. “But I am freaking out about the future, the long-term consequences.”

Most of the fires raged inside the forested 1,000-square-mile “Exclusion Zone” (some call it the “Alienation Zone”) around the Chernobyl nuclear plant — the site of the worst nuclear disaster in human history that lies barely 63 miles north of Kiev. Two-thirds of the zone are covered with dense forests and wetlands, where drought-dried peat bogs are as flammable as old newspapers and can burn for weeks or even months.

“A firestorm in the forest is scary, when it buzzes and approaches, scary that it could block a way out,” Volodymyr Shuvayev, one of the few Ukrainian photographers permitted to document the fires, told WhoWhatWhy.

The buzzing blaze approached and nearly reached storages of radioactive waste in the ghost town of Pripyat and Chernobyl’s Reactor 4, which exploded in 1986 and is now covered with a protective sarcophagus that is taller than the Statue of Liberty. The structure still contains enough radioactive debris to render most of Europe lifeless for tens of thousands of years.

“The situation is critical,” Yaroslav Yemelyanenko, head of the Chernobyl Tour company that annually brings tens of thousands of tourists to the Zone, wrote on Facebook.

Radiation levels at the site of the fires immediately exceeded permissible levels by 16 times, Yegor Firsov of the State Environmental Inspection said on April 4, but emergency officials insisted that in Kiev, the levels “did not exceed the norm.”

Some experts, however, disagree.

Increasingly frequent and devastating in recent years, wildfires destroy timber, dry moss, and other vegetation that have been absorbing radioactive isotopes for 34 years.

They turn radioactive particles into inhalable aerosols and pose an “especially dangerous threat given the dry winter and the enormous fuel load present in the region as a result of fires in previous years,” Timothy Mousseau, professor of biological sciences at the University of South Carolina, told WhoWhatWhy. “This is exacerbated tremendously by the ongoing COVID-19 pandemic which has paralyzed much of the country’s infrastructure,” said Mousseau, who has extensively studied the Chernobyl Zone’s forest.

Hundreds of firefighters and dozens of helicopters and planes dropped thousands of tons of water on the 50,000 acres of burning forest, but only mid-April rains helped contain the fires, and for only a few days.

The last fire was extinguished on April 26, Interior Minister Arsen Avakov said, but added that firefighters “are still working” on smoldering peat bogs.

Police said earlier that they had apprehended an arsonist who burned dry grass near a farm next to the Zone. He said he set the fires “for fun.” Setting fires to dry grass in the spring is a “widespread practice” in Ukraine, Russia, and other ex-Soviet nations.

But some people have more cynical reasons for setting fires in Ukraine.

‘Chernobyl’ Means Business to Some

In the 34 years since the accident, an entire shadow economy has spread throughout the cordoned off but poorly-guarded Zone. Anti-corruption groups, environmentalists, and officials say that the illicit businesses here range from large-scale tree logging and scrap metal smuggling to mushroom and berry gathering and fish poaching — fish contaminated with radioactive isotopes above permissible levels.

“This is not millions of dollars, this is tens of millions of dollars a year,” Roman Bochkala, head of the Stop Corruption group in Kiev, said in describing the magnitude of the problem. “Forest is 70 percent. Scrap metal comes second.” “Unfortunately, the Exclusion Zone is also a symbol of corruption in Ukraine,” Volodymir Zelensky said in July during his first visit to the Zone.

Ukraine ranks 120 out of 180 nations surveyed in 2018 by Transparency International, an international corruption watchdog.

Bochkala’s corruption-monitoring group documented the logging and smuggling of timber from the Zone to furniture factories that often sell their products in the European Union. The illicit profits amount to tens of millions of dollars a year, the group claimed.

Last year, this reporter visited the Zone three times, and flew over it in a helicopter twice. The forest’s green mass was crisscrossed with miles-long clearings and peppered with bald spots and light-green patches of saplings and underbrush. These “sanitary clearings” are firebreaks carved out by Pivnichna Pushcha, a state-run company established to prevent fires in the Zone.

Stop Corruption claims that many fires in the Zone were, in fact, the result of arson that was committed to justify the felling of decades-old oaks, pines, and ash trees.

Some Ukrainian officials agree with them.

“I have no doubts why fires near Chernobyl emerge — they are an attempt to hide illegal logging,” Mykola Tomenko, head of the parliamentary commission on the environment, told reporters in May 2015, during one of the longest and fiercest fires that burned hundreds of hectares of the Zone’s forest.

These days, homeless people or refugees from the separatist Donbass region smuggle out the Zone’s radioactive scrap metal, but bigger theft is masterminded in the administration halls of the shutdown Chernobyl plant where government-appointed officials implement security measures in the Zone.

In 2016, a Kiev court found Ihor Hramotkin, the plant’s director general, guilty of selling thousands of tons of decommissioned scrap metal from the gigantic plant’s reactors “at deliberately low prices” and embezzling more than $700,000. But the investigation did not end with a conviction, and Hramotkin resigned in 2018.

Meanwhile, villagers from dozens of impoverished villages around the Zone illegally fish and pick berries and mushrooms that appear at markets in Kiev within days.

Last year alone, food inspectors intercepted at least 16 batches of forest-picked blueberries with a high content of Cesium-137, a radioactive isotope and product of nuclear fission in the Chernobyl reactor, according to the TSN television network.

The wildfires and the coronavirus quarantine are a perfect combination to boost the Zone’s shadowy business. “The amount of illegal operations may rise sharply,” Kiev-based analyst Aleksey Kushch told WhoWhatWhy.

In March 2019, Ukraine’s Security Service said it detained a police officer who led a group of poachers who smuggled Chernobyl fish worth more than $6,000. S

Many impoverished residents have no choice but to participate in this dangerous economy, especially as the pandemic limits other options.