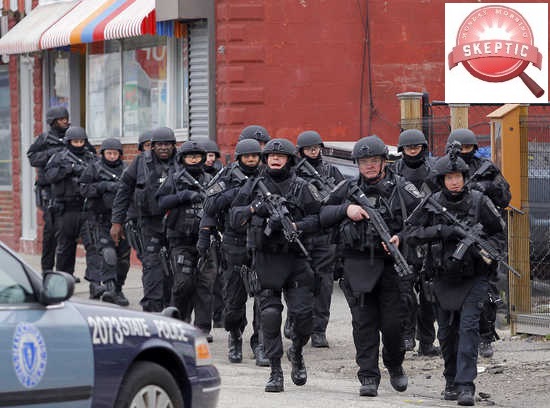 A glib article published in the Boston Globe on July 27 suggested that those who question the opaque law enforcement narrative about the Boston Marathon bombing have a screw loose.

“There are those,” the writer begins, ”who believe the bombs and blood were staged, the amputees and others injured were actors in some kind of Hollywood production designed to justify martial law.”

David Abel’s lead is a splendid Straw Man ploy: dismiss an idea by seizing upon an absurd exaggeration, like looking at a reflection in a funhouse mirror.

For validation, Abel quotes Jeanne Kempthorne, a Massachusetts criminal defense lawyer who worked from 1992 to 2003 as an assistant U.S. attorney in Boston. She slapped aside skeptics.

A fast-forward evolution is happening in criminal justice as citizen gumshoes use the Internet and social media to wheedle out clues and, yes, even evidence.

In one instructive example, a blogger named Alexandria Goddard used evidence collected from social media to help expose the sexual assault of a 14-year-old girl last summer in Steubenville, Ohio.

“The authorities” view this as meddling by amateurs. But online gatecrashing by “grassy knoll types” is certain to increase as law enforcement agencies like the FBI, once viewed as virtually infallible, have grown increasingly furtive, under cover of the surveillance state.

We asked Martin Garbus, one of the country’s premier constitutional attorneys, about the issue of public trust for law enforcers. He suggested that Americans have been taught a lesson by recent revelations of wholesale spying on citizens by the National Security Agency.

William Keating seems to agree, and he doesn’t seem like a kook. He is a Democratic U.S. Congressman who represents southeast Massachusetts, including Cape Cod, New Bedford and Plymouth. But he has respectful skepticism about law enforcement, learned on the job.

Like Kempthorne, Keating is a former prosecutor, having served 12 years as district attorney for Norfolk County, Massachusetts, before he was elected to Congress in 2010. He is a member of both the House Homeland Security and Foreign Affairs committees.

For three months, Keating has doggedly pursued answers about the Boston bombing from the FBI. He wants to know when the FBI recognized that Tamerlan Tsarnaev, the dead bombing suspect, was a threat to national security and why it did not share its intelligence with the Boston Police Department and other law enforcement agencies.

It would be charitable to describe the Bureau’s response as “less than forthcoming.”

So on July 31, Keating sent a wrathful three-page, 1,200 word letter letter to James Comey, the newly confirmed FBI director, demanding answers to seven questions related to the bombing investigation. Keating, who traveled to Russia in late May to investigate the case on his own, said he found the Russian intelligence agency, the Federal Security Service, to be more forthcoming than the FBI.

Keating complained that the FBI has three times declined invitations to appear before the House Homeland Security Committee to answer questions publicly. And in an Orwellian plot twist, FBI officials replied the next day–but not by contacting Keating. They planted a response in the New York Times.

The story begins, “The F.B.I. has concluded that there was little its agents could have done to prevent the Boston Marathon bombings, according to law enforcement officials, rejecting criticism that it could have better monitored one of the suspects before the attack.”

In other words, no mistakes were made.

Unnamed agency officials told the newspaper that the FBI has no intention of conducting an internal investigation. Nor, apparently, does it intend to cooperate with Keating’s committee.

If the congressman was seething when he sent the letter to Comey, he must have been apoplectic when he saw the response in the Times—by agency officials who were allowed by the newspaper to push back against the people’s representatives while remaining anonymous.

This has become a pattern for the FBI. Information is channeled without specific attribution through the major media, especially via John Miller, a CBS correspondent who once served as the agency’s spokesman. Often, the information has been flatly wrong.

One example was the New York Times’ report on April 22 about the weapons used by the Tsarnaev brothers, Tamerlan and Dzhokhar. One paragraph read:

“Along with determining that the suspects had made at least five pipe bombs, the authorities recovered four firearms that they believe the suspects used, according to a law enforcement official. The authorities found an M-4 carbine rifle — a weapon similar to ones used by American forces in Afghanistan — on the boat where the younger suspect was found Friday night in Watertown, Mass.”

Two days later, an Associated Press story—again citing unnamed officials—reported that the brothers had had a single gun, a 9mm pistol, and that Dzhokhar Tsarnaev was unarmed as local, state and federal law enforcers peppered his boat hideout with dozens of shots.

The April 22 story in the Times was corrected twice. One error concerned the geographic relationship of Watertown to Boston. The second clarified the use of the Miranda Warning exception used in the case. But the totally fallacious inventory of weapons was not corrected, and those details are still found in the electronic version of the story in the Times archive.

In fact, mistakes were made. Lots of them—and on more than a few significant aspects of the story.

But do such details really matter?

If you believe in the infallibility of the FBI, probably not. (The agency regards itself as infallible, as this perceptive –dare one say “skeptical”?– New York Times story about the FBI’s remarkable perfect record of faultlessness in agent-involved shootings dating to 1993.)

But the Boston Marathon bombing investigation has bloomed into a complex filigree of related inquiries—from the unsolved triple murder in 2011 in drowsy Waltham, Mass., to the rare “shelter-in-place” order and live-TV posse search for Dzhokhar Tsarnaev on April 19, to the puzzling FBI-agent shooting death in Florida of an unarmed friend of the Tsarnaevs who might have been able to answer crucial questions–had he lived.

Yes, details matter because they often can reveal larger truths.

So WhoWhatWhy joins flat-earthers like the American Civil Liberties Union and Congressman William Keating in asking questions that deserve answers.

1.  If Russia recognized Tamerlan Tsarnaev as a potential security threat, why didn’t the FBI?

In March 2011, Russian security officials asked the U.S. to help determine whether Tsarnaev had gone radical. The agency did a cursory investigation, and then dropped it. In a justification published in the New York Times on Aug. 1, unnamed officials said the FBI had absolved itself of any missteps in “several internal reviews.” The agency also has claimed it was prevented by law from delving further into Tsarnaev’s activities.
A point of contrast concerning what the authorities can do, inside or outside the law: On July 31, six law officers showed up at the Boston-area home of Michelle Catalano because members of her family had Googled the terms “pressure cooker” and “backpack.” It turns out they had been shopping online.

2.  How was Ibragim Todashev killed, and how has an FBI agent-involved shooting related to a high-profile terrorist bombing managed to become a state secret?

In an April 22, 2013, missive from the Russian FSB to the FBI, Ibragim Todashev’s name appeared under the heading “matters of significance.” He was a friend of Tamerlan Tsarnaev. One month later, on May 22, Todashev was shot and killed in his Orlando apartment by a Boston-based FBI agent.

The first gauzy explanation was channeled through John Miller of CBS, the agency’s former mouthpiece. As the story evolved, we were told that Todashev was armed with a knife. Or a broomstick. Or that he was unarmed—but that a samurai sword was hanging on the wall. The agent, who has never been publicly identified, fired five or six shots. A Massachusetts state trooper who was with him did not fire once. The Florida medical examiner’s office refused to release the autopsy report, by orders of the FBI.

Civil libertarians have demanded an accounting. As Howard Simon, executive director of the ACLU of Florida put it, “Secrecy fosters suspicion.”

Two points: If Todashev was considered a threat (and he should have been), informal questioning in the unsecured surroundings of the suspect’s own apartment was a glaring investigative mistake.  Second, the case highlights, once again, a fundamental lack of accountability for federal law enforcement entities. State and local police agencies are held accountable to the elected officials who hire and fire the top administrators and set budgets. Unless there is pressure from Washington politicians, the FBI can stave off public inquiries with virtual impunity—as in this case.

3.  How did the Waltham, Mass., Police Department and Massachusetts State Police go so wrong in its investigation of the triple murder in which Tamerlan Tsarnaev and Todashev were later implicated?

On Sept. 11, 2011, Brendan Mess, Erik Weissman and Raphael Teken were found dead in a house at 12 Harding Ave. in Waltham, a city of 60,000 west of Boston.  Their throats were slit, and cash and marijuana were sprinkled on the bodies.

It should have been a high-priority crime in Waltham, where triple murders are about as rare as Halley’s Comet. Officials believed the victims knew their killers. Tsarnaev was a close friend of Mess’s and a frequent visitor to the Harding Avenue house.

Friends and loved ones of the victims have said they pointedly told police investigators to question Tsarnaev. The suggestions should have been unnecessary; it is template detective work to interview those closest to murder victims. But no cop ever questioned Tsarnaev about the murders. Why?

4.  Who opened fire on the boat in Watertown, and why?

Amid the chaotic search for Dzhokhar Tsarnaev on April 19, David Henneberry alerted police that a bloody person seemed to be secreted in a drydocked boat in his backyard, at 67 Franklin St. in the Boston suburb of Watertown.

Officers from Boston police, Massachusetts state police and the FBI “set up a perimeter,” as Boston Police Commissioner Ed Davis put it, then “exchanged gunfire” with Tsarnaev for about an hour. Much of the action was viewed and heard on live television, included the reports of flash-bang percussion grenades.

Photos showed about 40 bullet holes in the port side of the 22-foot boat. The shot pattern was clustered toward the middle of the boat, precisely the spot where the helicopter imaging had shown him lying.

When a bloody Tsarnaev finally emerged, the media reported that he had been hunkered down with a small arsenal—including an M-4 rifle, as a Washington source told the New York Times—and that he had apparently shot himself in the neck. That was all wrong, it turned out.

In most cases, a law enforcement shooting siege against an unarmed person leads to a weapons-discharge investigation. Will that happen in this case?

5.  Will Danny the Carjack Victim ever emerge from the shadows and tell his story publicly?

American crime heroes usually end up on the sofa at NBC’s “Today” show. But Danny has shied from the true-crime klieg lights, appearing in shadow with a fuzzed-up voice with both Today’s Matt Lauer and CBS’s Miller—after sitting with the Boston Globe, in an interview brokered by Jamie Fox, a Northeastern University criminology professor.

Is something stopping Danny from stepping into the sunshine and enjoying his media star turn?

6.  Why was Sean Collier, the Massachusetts Institute of Technology police officer, killed?

Collier was shot and killed at about 10:20 p.m. on Thursday, April 18, as his sat in a patrol car near Vassar and Main streets on the nearly empty MIT campus in Cambridge. The public has been told that his assailants were almost certainly the Tsarnaev brothers, but produced no rationale or proof. WhoWhatWhy’s Russ Baker explored some of the questions about that particular component of this investigative labyrinth.