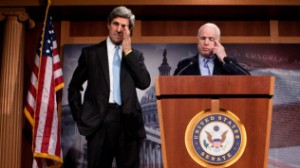 Kerry and McCain Unite Behind the Mysteriously Urgent Libya Mission What do Kerry and McCain know about Libya that we don’t?

At whowhatwhy.org, we’ve been saying for some time that things just don’t add up when it comes to Libya. (For some of our past reporting, see for example this and this and this.) First the White House claimed that NATO needed to engage in a few days of bombing in order to protect Libyan civilians from Muammar Qaddafi’s troops. Those few days have turned into three months, and protecting civilians has morphed into a massive and unrelenting bombing campaign.

Now, Democrat John Kerry and Republican John McCain are proposing a bill to authorize US troops’ involvement in Libya for an entire year. And for what reason?  “To advance national security interests in Libya.”

The Kerry-McCain resolution does provide the sponsors with some political cover, by stipulating limitations on how US troops can be involved in Libya:

“Congress does not support deploying, establishing or maintaining the presence of units and members of the United States Armed Forces on the ground in Libya unless the purpose of the presence is limited to the immediate personal defense of United States Government officials…or to rescuing members of NATO forces from imminent danger.”

But that’s not what matters. What matters is that Kerry and McCain, 2004 and 2008 presidential nominees of opposing political parties, know something that makes them back Barack Obama in committing heavy resources to the job of removing Qaddafi. This is, among other things, ample grounds for concern about the range of permissible views within the elite policy circles of both parties.

Readers of this website and of my book, Family of Secrets, understand that the US government rarely levels with the American public on the real reasons for strategic policy decisions. In this case, the phrasing used by Kerry and McCain make clear that Libya has “national security” implications for the United States—implications that they so far will not lay out.

We’ve talked about what those implications are likely to be.

It is clear that, in light of the still-unfolding Arab Spring and the destabilization of cooperative regimes, strategically located and oil-rich Libya simply must be brought into the US camp. It is the ideal new anchor for long-term future US military operations in the region designed to secure continued access to oil supplies.

The administration cannot simply explain to Americans (and, hence, to the world) that it feels justified in military action to protect the vital flow of oil. So it has to be oblique.

Meanwhile, those apparently excluded from the inner sanctum take a position that, on the surface, seems more logical and responsible, given that the White House estimates the Libyan campaign will have cost a staggering $1.1 billion by Sept. 30.

“Our members are frustrated over the president’s action, his lack of positing a clear vision and mission,” he said. Discussions were under way on possible House action, including denying funds for the operation as part of a defense-spending bill that’s expected to be considered beginning Thursday.

There’s plenty of evidence that a great deal is at stake. Besides blanketing Libya with bombs, the Administration is trying economic sanctions, and working to convince more of Qaddafi’s top brass to switch sides:

In another development Tuesday, the Treasury Department took new steps to isolate the Libyan regime and provide incentives for its members to pitch down.

… “Our sanctions are intended to prevent harm and change behavior,” Adam Szubin, the director of the Office of Foreign Assets Control, said in a statement announcing the actions. “To the extent that sanctioned individuals distance themselves from the Gadhafi regime, these measures can be lifted.”

Meanwhile, the White House is claiming it doesn’t need Congressional approval under the War Powers act to continue the bombardment of Libya, as long as American lives are not at risk. That’s a sly one, and Kerry is going along with it:

“The fact is that just because hostilities are taking place and we are supporting people engaged in those hostilities does not mean that we are ourselves, in fact, introducing troops into hostilities.”

So Kerry and McCain understand what is at stake and what is expected of them. Meanwhile, we continue to be amazed by how the news media is missing the whole story.