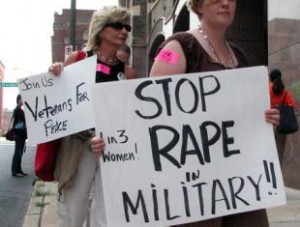 Rape is tragically common in wartime—but did Qaddafi really order it?

Media reporting of atrocities by the Libyan regime continues to heat up. The alleged crimes are horrific—Muammar Qaddafi ordering mass, Viagra-fueled rapes. But the claims are mitigated by some really poor journalism, raising suspicions that the public is falling victim to a disinformation campaign. Here’s the latest.

Stories with a sexual component have always been instant hits in the ratings, and things are only getting worse. According to the Project for Excellence in Journalism, last week, media coverage of Congressman Anthony Weiner and his pornographic tweets filled 17 percent of the “news hole” (space and time devoted by the media). The economy, by comparison, accounted for 11 percent. The Middle East also got 11 percent.

Actually, a greater percentage had something in common when you count stories on wieners of all kinds. Because a rapidly spiraling scandal involves the allegation that the embattled Libyan leader Muammar Qaddafi ordered his troops to commit mass rape—and gave them Viagra to help fortify them in this atrocity.

As we noted previously, that story has been reported widely throughout the world. As we also noted, there’s scant evidence that it is true—at least at this point. Moreover, it shows signs of being part of a larger disinformation effort of the sort that has always been part and parcel of war. (A war whose true purposes, as you can see from an earlier analysis we did, is consistently obscured.)

Despite reasons to be cautious, the media have picked up the ViagraRape story with the sort of enthusiasm they showed for the Anthony Weiner saga.

The Weiner story at least turned out to be true. Though that doesn’t mitigate how the media pandered to public voyeurism—letting this one man’s personal misdoings dominate and shut out more substantive reports, on things that actually affect us and our world.

The Libyan mass rape story is another thing entirely. As we have noted, the coverage has been characterized by recklessness and laziness. And in this case, much more is at stake than a single congressman’s future.

Perhaps the ViagraRape story will turn out to be true. But so far there is no real evidence. There is also no logic in believing that a man in Qaddafi’s dire position vis a vis public opinion would order something like that. As brutal as he has been, there is no previous track record of him ordering mass rapes. And there are many reasons to be suspicious of the story.

Now comes the latest entry in the gullibility sweepstakes. From the hallowed BBC, of all places.

…Libyan charities say they are getting reports that in the west of the country, which is particularly conservative, Col Muammar Gaddafi’s forces have tended to rape women and girls in front of their fathers and brothers.

“To be seen naked and violated is worse than death for them,” says Hana Elgadi. “This is a region where women will not go out of the house without covering their face with a veil.”

Ms Elgadi is in a group of Libyan volunteers offering medical help and HIV tests. The organisation is also offering to pay for abortions for women who have been raped in the war.

Well, Ms. Elgadi is “in a group of Libyan volunteers”. But she is not a Libyan volunteer herself, nor simply helping victims. She is an expat with a mission. On her Facebook profile, she lists herself as “Hana FreeLibya Elgadi”. She lives in London, and is an investment banker. Without in any way questioning Ms. Elgadi’s intentions, the fact remains that she is a declared partisan of the forces seeking to overthrow Qaddafi, not an impartial or expert eyewitness.

More from the BBC piece:

“Time is against us,” says Nader Elhamessi from the Libyan aid agency, World for Libya

“For the moment pregnancies can be disguised, but not for much longer. Many fathers will kill their own daughters if they find out they have been raped.”

…The charity World for Libya has engaged imams across the border in Tunisia to preach that rape is not the victim’s fault.

…World for Libya is trying to reach a group of teenage girls still inside Libya whose school was attacked by forces loyal to Col Gaddafi.

“The armed men separated the girls and raped those they deemed more attractive,” says Nader Elhamessi. “One of the girls cut her wrists and killed herself rather than face the shame. The rapes were only reported to us by the girls who were left alone.”

The reality is that rape has always been a byproduct of war and violence (involving even American soldiers on occasion) . But the best we have here is second-hand reports from teenagers who say they themselves were not harmed. That’s just not good enough before spreading a story like this.

Another basic thing journalists should do is explain what organizations are. We looked up “the Libyan aid agency World for Libya” and found that its website is hosted by a London ad agency. That agency is owned by Salah Mussa, a wealthy London-based real estate magnate and Libyan exile. His company, Chesterton, was glad to do business with Qaddafi not so long ago.

Chesterton hopes to open an office in Libya by November 2009 and work closely with the country’s sovereign wealth fund there, the Libyan Investment Authority (LIA).

Unfortunately for Mussa, Goldman Sachs was there first, managing to lose 98 percent of $1.3 billion the Libyan sovereign wealth fund gave it to invest. This was reported by the Wall Street Journal. Qaddafi, furious at the losses, became increasingly hostile to Western investors seeking Libya’s riches.

Back to the BBC story:

One family who contacted Ms Elgadi needed medication for HIV.

“The mother, the father and the son were all raped by Col Gaddafi’s forces. The mother came to us when they discovered they had contracted HIV/Aids as a result.”

…The International Criminal Court says it believes Col Gaddafi’s forces are using rape as a weapon of war. The ICC says it has reason to believe orders to rape were given, and the drug Viagra was distributed to fighters.

For more on the ICC’s claim, and how thin it is, see our previous piece.

A major in the Libyan army who has now deserted told the BBC the shipments of Viagra were widely known about, but neither he nor his colleagues saw them.

“The order to rape was not given to the regular army,” says the major, who did not want his name to be used, because his family is still in Tripoli. “Col Gaddafi knew we would never accept it. It was given to the mercenaries.”

So we are to take the word of an unnamed army major who deserted—and who himself says it was not the army, and that neither he nor his colleagues saw any Viagra in use. Just “widely known about” as it is “widely known about” by all of us who consume these “news reports.”

Mr Jamal, the UNHCR’s emergency co-ordinator for Libya, says it has not so far uncovered evidence that rape has been used as a weapon of war, although it has seen evidence of individual instances of rape throughout the country.

“We have also seen evidence that would seem to suggest that rape has been carried out by both sides, but we cannot say on what scale,” he says.

Jamal’s more balanced initial analysis appears late in the story, where it is easily missed by those who will naturally focus on the headline and lead paragraphs.

Libyan volunteers are advising international agencies on how to get Libyans who have been raped to come forward.

“A foreigner cannot go in there with a clipboard and a translator and get a response,” says Ms Elgadi.

This of course cuts out exactly those with the credentials and objectivity who can really be trusted to assess the situation.

Again, one cannot rule out the possibility that Qaddafi personally ordered mass rape. Or that he supplied Viagra to soldiers or mercenaries following his orders. But this follows a long history  of deliberate disinformation in war, notably the false stories conjured up by PR outfits during the Gulf War—including the notorious made-up tale of Iraqi soldiers throwing babies out of incubators at a Kuwaiti hospital. Congress bought that one, and the American people were up in arms, eager to support military action. The “mission creep” on Libya has expanded from an initial promise to “protect civilians” for a few days into what can only be described as yet another undeclared war.