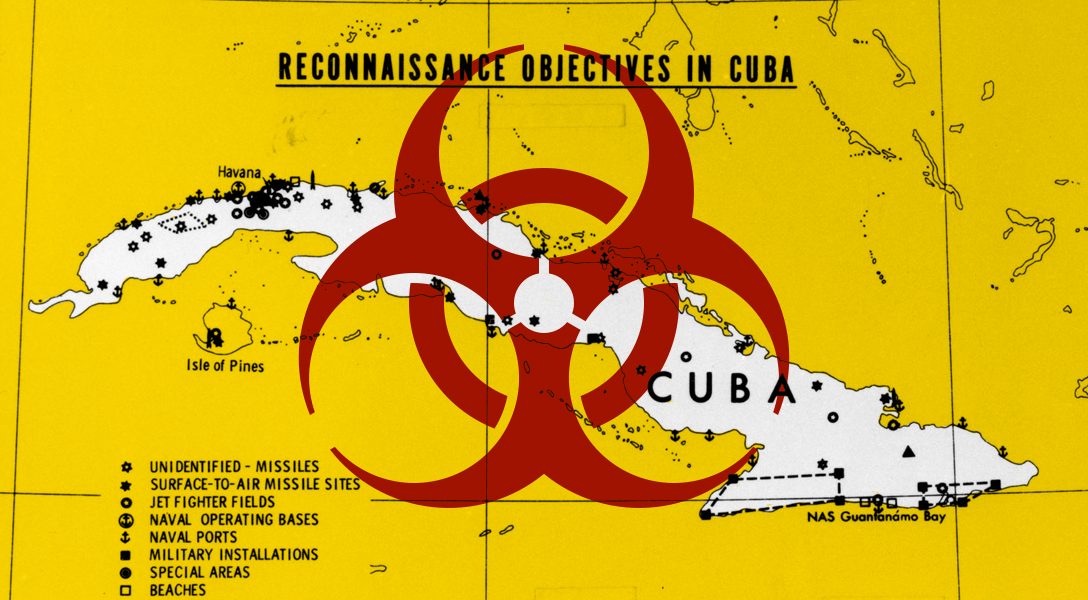 In the summer of 1975, congressional staffer Loch Johnson was searching through classified papers at the LBJ Library in Austin, Texas, when he came across something he couldn’t believe — a covert plan by the US military to deploy biological weapons against Cuba.

This was more than Johnson was bargaining for, even though he was at the archive looking for files related to covert actions directed against Cuba. By July 1975, the Watergate hearings had finished, and three separate, high-level investigations were underway — all aimed at revealing covert and possibly illegal activities of US intelligence agencies, including assassination.

Johnson was working as top aide to Sen. Frank Church (D-ID), chair of the Senate Select Committee to Study Governmental Operations with Respect to Intelligence Activities, the so-called “Church Committee.” The American public knew that their government had a tense relationship with Cuba, especially with its feisty leader, Fidel Castro. The US had unsuccessfully underwritten a Cuban-exile paramilitary invasion at the Bay of Pigs in 1961 — a disaster in every sense. And just a year later, the world came to the brink of nuclear apocalypse after a showdown with the Soviet Union over nuclear missiles it had placed in Cuba.

What the public was not aware of then, and would only discover in later decades, was that the CIA had attempted all manner of assassination plots against Castro, in addition to widespread sabotage actions — such as burning sugarcane fields and blowing up power plants — with the goal of undermining Cuba’s Communist government. Some of the assassination plots were exotic — a poisoned diving suit, an exploding shell, an exploding cigar, poison pills, and an exploding pen. One of the more startling revelations was that the CIA had been working closely with the Mafia in its efforts to eliminate Castro.

But that’s not what shocked Johnson that day.

He had come across a memo dated October 30, 1964, from the Joint Chiefs of Staff (JCS) to the Secretary of Defense. In responding to an earlier presidential request for “new ideas related to Cuba,” the Joint Chiefs proposed a project code-named SQUARE DANCE — which Johnson caustically referred to as “their first bright new idea.”

Johnson relayed to his superiors at the Church Committee the details of project SQUARE DANCE:

The proposal envisioned the destruction of the Cuban economy by introducing aerially from off-shore a sugar cane plant parasite called Bunga. The program would begin with a 30 percent reduction of anticipated Cuban sugar production (see page 6) and within three-to-six years the ruination of the sugar industry would be achieved.

But that wasn’t all. Johnson quoted directly from the JCS memo:

The economic and political disturbances caused by this attack could be exacerbated and exploited by such measures as spreading hoof-and-mouth disease among draft animals, controlling rainfall by cloud seeding, mining canefields, burning cane, and directing other acts of conventional sabotage against the cane milling and transportation systems (emphasis added in original document).

Hoof-and-mouth disease (sometimes referred to as foot-and-mouth disease) is highly infectious and affects farm animals such as cattle, sheep, goats, and pigs. The disease causes high fevers followed by blisters in the animal’s mouth and feet. While very rarely affecting humans, it can bring devastating economic consequences to farmers. Containing a 2001 outbreak in the UK cost some £8bn ($12bn) in public and private outlays.

In their memo about the SQUARE DANCE proposal, the US Joint Chiefs spelled out the strategic value of the project: “[Square Dance] would furnish another option to the United States in bringing about the collapse of the Castro regime.”

The memo unearthed by Johnson is not the only instance of the US military proposing to use biological warfare against Castro’s Cuba. A JFK document release last year revealed an intelligence memorandum from 1962 discussing the possibility of using biological agents to induce crop failure “which would appear to be of natural origin.” A US Army memo from 1963, recently released by the National Archives, lists a number of “Ideas to Exploit Cuban Vulnerabilities,” including the initiation of “biological warfare against vegetable and animal tissue (except human).”

The October 30,1964, memo, referenced in Johnson’s book National Security Intelligence but digitally released last month by the National Archives, gives us a clearer picture of what that might have looked like.

“Bunga,” known also as Aeginetia Indica, is a flowering weed that acts as a root parasite to nearby plants. It can be particularly harmful to sugarcane crops, which were Cuba’s primary economic output. US intelligence sabotage efforts had long targeted sugar crops, including night raids from offshore boats planting incendiary devices in fields. But this was something different.

Like the earlier memo from 1962, this one mentions the need for deniability: “It appears feasible to introduce gradually Bunga into Cuba and maintain a basis for plausibly disavowing US involvement.”

The 1964 memo leaves no doubt as to the ultimate goal of this program:

The Joint Chiefs of Staff continue to believe that the ultimate objective toward Cuba must be to establish a government in Cuba that is acceptable to the United States.

Johnson makes clear that he does not know if this plan for forcing regime change in Cuba was ever implemented, and suggests that the White House may have been skeptical of the idea. But the alarm in Johnson’s own memo is apparent:

The mere writing of this kind of proposal is a reprehensible first step toward the worst kind of foreign policy mischief. I find it even more repugnant than contingency plans for assassination. These are not the kinds of recommendations which should filter up to the White House from the intelligence community. The agencies must have a better sense of what is acceptable policy, legally and morally. …

The result of SQUARE DANCE would have been parasitic death for the major plant and animal life in Cuba. The feeble efforts of the CIA to direct assassination attempts against Castro pale by comparison with this Army proposal for covert action.

I believe SQUARE DANCE deserves our attention. If assassination is unacceptable, surely too is the widespread destruction of plant and animal life through covert germ warfare.

In 1964, the international law governing the use of biological weapons was the Geneva Protocol of 1925. But its jurisdiction at that time was limited.

“The intentional spread of disease as a method of warfare would be a violation of the Geneva Protocol if the US was a party, which it was not,” Dr. Richard Price, who teaches politics and international law at of the University of British Columbia, told WhoWhatWhy. The Geneva Protocol of 1925 “banned not just asphyxiating gases but also ‘bacteriological’ weapons, but the US did not ratify that until 1975 so was not bound by it [in the early 1960s].”

Price points out, however, that the use of the chemical herbicide Agent Orange during the Vietnam War, while also technically not illegal at the time for the same reason, certainly caused plenty of controversy. During the Vietnam War, the US military exposed up to four million people to the herbicide and defoliant chemical known as Agent Orange. Photo credit: Adapted by WhoWhatWhy from US Army / Wikimedia, Unknown / Wikimedia, and Vietnam News Agency / Wikimedia.

The use of parasitic plants like Bunga, while perhaps not the first thing that comes to mind when thinking of biological weapons, is nevertheless considered a dangerous form of biowarfare by some scholars.

Of course, the US had not officially declared war against Cuba or gained UN authorization — thus the need for “plausible deniability.”

What Really Happened in Korea

The potential use of covert germ warfare against Cuba, while in itself remarkable, is intriguing for another reason. During the Korean War, the Chinese and North Koreans had protested that the US was using biological weapons against the North Korean people. Downed Air Force pilots had confessed to it, only to claim after their return from North Korean prisoner of war camps that they were the victims of brainwashing. A long-suppressed and controversial international commission report concluded that the allegations were true.

The issue surfaced more recently with the release of the Netflix docudrama series, Wormwood. It is an exploration of the mysterious circumstances surrounding the death of government scientist and CIA employee Frank Olson in 1953, and his family’s decades-long effort to find out what really happened. Olson had worked at Fort Detrick, a US army base in Maryland that happened to be at the center of the US’s biological weapons research.

The Wormwood narrative suggests that Olson had doubts and guilt about the work he was doing as it related to the Korean war, and that the CIA had him murdered to prevent him from ever speaking out about the projects.

While the 1964 JCS memo neither confirms nor negates allegations about the use of biological weapons in Korea, it’s clear that the US military was not opposed to using such methods, even if that meant causing drastic harm to the entire civilian population.

What’s also noteworthy is the timing of the memo. The year is 1964: President Lyndon Johnson is now in power after the assassination of JFK, and the plan to overthrow Castro is still a strategic goal. Previous failures to dislodge Castro, which had led to the risk of nuclear annihilation in the Cuban missile crisis, were apparently not strong enough warning signals for the president and JCS.

The goal of US policy toward Cuba would remain regime change, but President Johnson would soon have his hands full with an escalated conflict and ultimate quagmire in Vietnam — one that Kennedy had been seeking to withdraw from before his untimely death.

That summer in 1975, Loch Johnson came to an understanding of what his government was capable of. Although it appears that the White House ultimately rejected the JCS plan, it’s easy to empathise with Johnson’s horror that the US would seriously propose such actions. It would be many decades before the American public learned the shocking truth. If the Church Committee had decided to reveal all of those realities would it have changed the public perception of US foreign policy? Would it have challenged the American notion of American exceptionalism?

Perhaps a more unsettling question is whether those tendencies present in the Joint Chiefs of 1964 are present in the hearts and minds of high office leaders today.