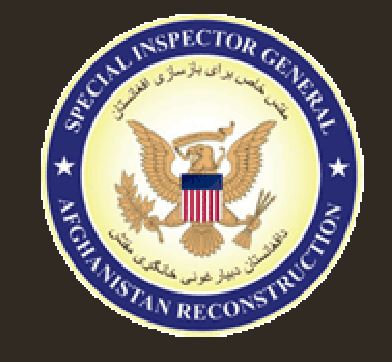 SIGAR, which found that nearly half of all money put into Afghanistan reconstruction, was recently told it had to slash its staff. Irony or business as usual?

How’s this for poetic injustice? The watchdog who found that fully half of all monies poured into Afghanistan was unaccounted for or wasted… has been told to slash his staff.

It seems, despite (or perhaps because of) the $56 billion dumped into “reconstruction”, the Department of Defense (DOD) cannot afford to keep the watchdog at present strength.

Shooting (or is it slashing?) the Messengers

John Sopko, the Special Inspector General for Afghanistan Reconstruction (SIGAR), was ordered by the US embassy in Kabul to slash his staff in the country by 40 percent and that the cut was “non-negotiable.”
“This arbitrary number was developed without SIGAR’s input, and embassy officials did not provide any explanation for how they determined these cuts,” Sopko said April 30 in testimony before the National Security subcommittee of the House Oversight and Government Reform Committee.

“I am extremely concerned about the impact these personnel cuts will have on SIGAR’s mission and on the US reconstruction mission as a whole,” Sopko said, noting that despite the US drawdown from Afghanistan, the country would remain the largest recipient of US assistance for years to come.

“In other words, while the troops may be coming home, the checks are still going over there,” Sokpo said.

It’s unclear exactly how much money will be saved by the SIGAR staff cuts, though SIGAR was told to cut its 42 positions to just 25. What’s not unclear is that the savings gained by staff cuts will not compare to the billions of dollars SIGAR identified as unaccounted-for or wasted funds.

Based on his testimony, as well as the numerous audits and reports SIGAR has made public, why would the embassy decide that now was a good time to slash the watchdog’s staff?

Sopko recently told lawmakers that US funding for the salary of Afghan security forces remains a challenge. US taxpayers quite literally do not know how much bang they get for their buck because “neither the United States nor its Afghan allies truly know how many Afghan soldiers and police are available for duty, or, by extension, the true nature of their operational capabilities.” US funding for the salary of Afghan security forces remains a challenge.

On the day of Sopko’s testimony, SIGAR released a report on the Afghan forces warning of more trouble to come. The report stated that millions of dollars are at risk due to a lack of oversight of personnel and payroll data. For example, it is unclear how many people are serving in the security forces, and salaries are still calculated by hand because there is no electronic payroll data system in place.

Another challenge is that DOD loses oversight of billions of dollars once funds for the Afghan defense forces reach the country’s Ministry of Finance. At the same time, SIGAR loses jurisdiction over the money at that point.

A Glimmer of Hope?

Sopko also testified that there are some encouraging signs out of Afghanistan. He said that both the new Afghan government and the Combined Security Transition Command–Afghanistan (CSTC–A) “appear to be taking serious action to address weaknesses in ANSF personnel and payroll data process…”

In another hopeful sign, Sopko pointed to steps the new government has taken recently “to combat waste and corruption.

“As a result of SIGAR’s recent investigation into bid rigging [on major military contracts], President [Ashraf] Ghani has fired numerous officials, opened his own investigation, and introduced much needed procurement reforms, demonstrating his commitment to combating corruption within the Afghan government.”

Sopko told lawmakers that these actions send a clear signal from President Ghani and the Chief Executive Officer of the Afghan government, Abdullah Abdullah, “that past practices will no longer be tolerated.”

Sopko said that “every dollar we spend now on training, advising, and assisting the Afghans, and on oversight must be viewed as insurance coverage to protect our nearly trillion dollar investment in Afghanistan since 2001.”

Sopko stressed that the good changes in Afghanistan are even more reason for SIGAR to continue its mission without having drastic cuts imposed on it. But what else might they find? Who would find that a problem, and why?