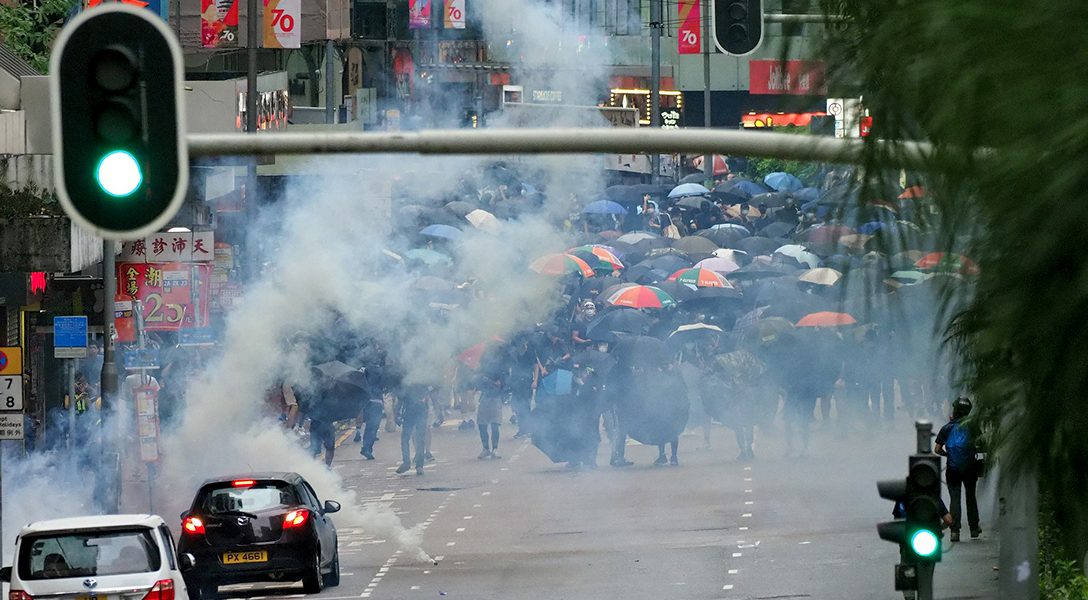 HONG KONG — Kneeling on the ground with his hands handcuffed behind his back and his eyes streaming with tears, a gray-haired, middle-aged man is clearly in acute distress.

Police officers have just pepper-sprayed Richard Chan in the face, violently wrestled him to the ground, broken his spectacles, and arrested him.

With less than two weeks remaining before 4.13 million Hongkongers head to the polls for the city’s district elections, a government crackdown is targeting any type of public protest or dissent. Among the targets: election candidates.

Before he was led away by armed riot police, Chan told WhoWhatWhy he had “no idea” why he had been arrested, insisting he had “done nothing wrong.”

Chan was one of three election candidates who were arrested during a peaceful election rally at Victoria Park in early November. He was later charged with illegal assembly and obstructing the police, after police used tear gas to disperse what they called an “illegal assembly.”

Democracy is a dangerous pursuit these days in Hong Kong, as candidates and activists are violently attacked, intimidated, and arbitrarily arrested.

Hong Kong’s most famous local advocate of democracy, Joshua Wong, has already been disqualified. On November 8, no less than seven pro-democracy lawmakers were either arrested or notified of their pending arrest. Police said that they broke the law during a contentious Legislative Council meeting back in May. One of those arrested was popular pro-democracy lawmaker and activist Eddie Chu Hoi-dick, who polled more votes than any other candidate in the last Legislative Council elections in 2016.

Hong Kong Police arrested Richard Chan, a candidate in district elections in Tai Po, as they clean his eyes after local media says he was pepper-sprayed.

Chan was dubbed "airport uncle" after he stood between police and youngsters at an airport protest… pic.twitter.com/ZHa2y8eiU4

The day after Chan’s violent arrest, 34-year-old Democratic Party member Andrew Chiu had his lower ear bitten off during a struggle with an assailant armed with a knife. This was during a public election event in a busy shopping mall.

At least four more pro-democracy candidates have been physically attacked since late September. While the pattern of intimidation seems focused on suppressing pro-democracy activists, the pro-Beijing camp has been on the receiving end as well..

The controversial pro-Beijing candidate Junius Ho Kwan-yiu was stabbed in the chest by a man last Wednesday. Ho is scheduled to undergo surgery while a male suspect has been charged with attempted murder.

These violent incidents and the vandalizing of pro-Beijing party premises prompted the independent Electoral Affairs Commission (EAC) to make an unprecedented statement calling for an end to violence: “The EAC calls upon the community to make the best efforts to ensure that the election can proceed in a peaceful and safe manner.”

Since then, the volatile atmosphere in Hong Kong, a center of international finance, has only intensified. The death last Friday of student demonstrator Chow Tsz-lok, who fell from a multi-story car park while fleeing police tear gas, triggered new levels of anger and tension. On Monday, an unarmed male protester was shot at close range by police in the residential district of Sai Wan Ho and is reported to be in critical condition in hospital. The same day, a man filmed demonstrating peacefully with protesters in Ma On Shan was set on fire and critically injured.

Residents describe a city descending into anarchy. “You had the feeling going out into the city this morning that the system is at the breaking point. The government and police can’t manage it,” said Kong Tsung-gan, a writer and activist.

Protests continued on Tuesday, paralyzing business activity, as police accused the demonstrators of bringing Hong Kong to the “brink of total collapse.” In the evening, huge numbers of police stormed the Chinese University in Hong Kong.

Unless the fevered atmosphere cools, the government may cite public safety concerns as a justification to cancel the elections. This move would be popular with its backers in the pro-Beijing political parties, who expect to be punished by voters for their support of the extradition legislation that triggered the social unrest in June.

“Definitely, there are substantial voices within the pro-establishment camp candidates to postpone the District Council elections,” said former lawmaker and treasurer of the Democratic party, Sin Chung-kai.

The district elections scheduled for November 24 are particularly significant because of their timing. Though district councilors have no legislative power and act only as part-time advisers  on local policy, the election offers voters the opportunity to send a powerful message to Beijing.

The pro-democracy camp has coordinated its efforts carefully to ensure a good chance of success, and record numbers of people have registered to vote. Democrats are expected to significantly increase their current share of 120 council seats out of a total of 452.

“As the confrontational protests continue, we cannot expect an overwhelming victory for the Democrats, [but] the pro-establishment camp will definitely have a substantial setback,” said Sin.

If the democracy advocates can achieve a majority of the 452 seats, they could influence the outcome of the next chief executive election, too. The city’s leader is elected by a committee of about 1,200 individuals, including 117 district councilors. These 117 votes are cast as a bloc nominated by the group holding the majority of district seats, currently the pro-Beijing camp.

“The crucial factor is whether the opposition camp can win more than half of the seats out of a total of 452,” said Sin. “My estimate is about 200–220 seats for the opposition.” But whether Beijing will permit this free expression of political sentiment is uncertain.

Speculation is mounting that Beijing might cancel the elections. The Chinese state news agency Xinhua reported last week that the “appeal for peaceful and fair district council elections has been on the rise in Hong Kong amid escalating violent acts and threats targeting candidates and voters.” It’s unusual for Xinhua to comment on Hong Kong elections. Highlighting the problem of violent intimidation in this way could signal a push to make cancellation more palatable. Indeed, some in the pro-Beijing bloc have called for the postponement of district council polls, citing protest violence and candidates’ safety

But on Tuesday, Hong Kong Chief Executive Carrie Lam vowed that the district elections would be held on time. Sin thinks the recent meeting of Lam with Chinese President Xi Jinping was significant.

“Such a gesture can be read as urging the pro-establishment camp to prepare for district council elections,” said Sin, who, with the US trade war still in the balance, thinks China wants smooth elections.

As with every political issue in Hong Kong, the final say over elections will rest with Beijing.