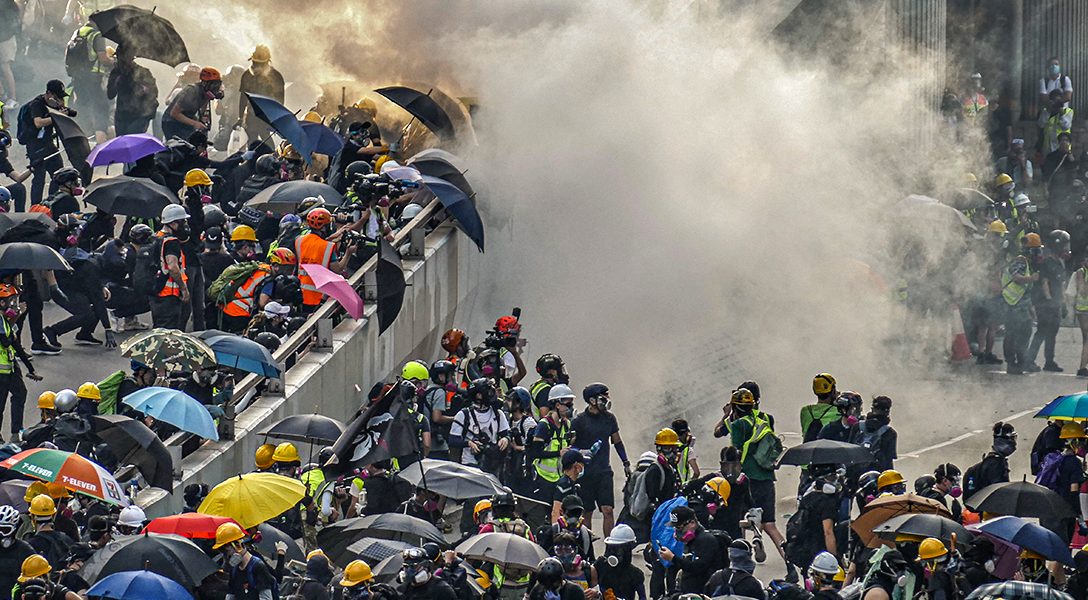 HONG KONG – For the last four months, on the streets of Hong Kong thousands of pro-democracy protesters and riot police have ebbed and flowed in violent confrontations. But high above the battles in the plush skyscraper offices of banks and financial houses, it is billions of dollars that continue to swell silently in and out of the city along the digital highway.

Indeed, the protesters take comfort from Hong Kong’s international reputation for dealing money. “I think China still needs Hong Kong. No city (in China) can replace it as a financial hub at this stage, particularly not in the middle of a trade war,” protester Ella Wan told WhoWhatWhy.

Will this save them from a bloody military crackdown by the Chinese People’s Liberation Army (PLA)? The threat has been a constant fear throughout the months of street protests in Hong Kong — and the tension is increasing. Sunday’s harmless detonation of what was apparently a homemade bomb only ratchets up the level of conflict, and may have bolstered whatever justification Beijing needs to intervene.

“Anyone attempting separatist activities in any part of China will be crushed,” said President Xi Jinping on Sunday, during a state visit to Nepal, in a clear warning to Hong Kong.

The previous weekend, anxiety was heightened when PLA troops stationed at Kowloon Tong barracks in Hong Kong raised yellow warning flags to those protesting outside, accused of shining lasers at them. The tense moment soon passed and pro-Beijing politicians were quick to pour rhetorical cold water on the incident.

“If I do see a tank on the streets of Hong Kong, I will be very scared, of course, but right now we have no choice — it’s now or never,” said Kathryn Chan, a seasoned demonstrator, speaking in central Hong Kong.

Others are convinced that PLA and Chinese security forces are already operating covertly within the ranks of the Hong Kong Police Force (HKPF). Rumors to this effect cite the refusal of police officers to show their HKPF numbers or ID cards, their widespread use of Putonghua (the mainland Chinese dialect), and the belief that the average height of riot police seems to have increased by about 20 percent over recent weeks. It can’t be substantiated, but on October 10, the Hong Kong government felt it necessary to issue a statement declaring “that the rumors are false and groundless.”

Article 14 of the Basic Law, Hong Kong’s  mini-constitution, is specific about the role of the PLA garrison. It shall “not interfere in the internal affairs of the region,” but it also stipulates that the Hong Kong government “may, when necessary, ask the Central People’s Government for assistance from the garrison in the maintenance of public order and in disaster relief.” All that is required for the PLA to enter the fray, and for Tiananmen 2 to play out on our TV screens, is for Carrie Lam, Hong Kong’s chief executive, to request it, or be instructed to request it by Beijing. Indeed, last week she refused to rule out asking for Chinese government help in putting down the long-running protests “if the situation becomes so bad.”

The desecration of Chinese national emblems and routine waving of American and colonial era flags during protests, particularly on China’s National Day (October 1) enrages the Chinese Communist Party leadership, but their restraint to date has little to do with legal impediments and more to do with economics.

Despite the bellicose videos, rhetoric, and rumors, there are sound reasons to believe Beijing is not going to sanction the deployment of tanks and armed troops anytime soon. The consensus remains that any TV footage broadcast around the world of PLA tanks rumbling down the streets of one of Hong Kong’s glossy retail or business districts would signal the end of the city as an international financial center.

“China knows the consequences in terms of economic and reputational damage,” said Anthony Dapiran, author of City of Protest and close observer of the protest movement in Hong Kong.

Bankers, brokers, and wealth practitioners would flee the sinking ship, and for now, at least, Beijing simply can’t afford for that to happen.

According to figures from the Hong Kong Trade Development Council, Hong Kong is the largest conduit for foreign direct investment (FDI) in the Chinese Mainland. By the end of 2018, cumulative utilized capital inflow from Hong Kong to China amounted to over US$1 trillion, accounting for 54.1 percent of the national total. Some estimates put the total proportion of Chinese FDI with some sort of Hong Kong connection as high as 70 percent.

According to Bloomberg, roughly 58 percent of Chinese outbound investment is channeled through Hong Kong, including funds for Xi Jinping’s signature Belt and Road Initiative.

There are also more than 1,100 mainland firms listed on the Hong Kong stock market, with a US$2.6 trillion total market capitalization, including giant Chinese corporations like Tencent.

More sinister is that Hong Kong is where the wealthy Chinese elite hides its money, often in offshore trusts. China is nominally a communist state, but UBS Group AG estimates a new billionaire emerges in the country every two days.

Hong Kong is the world’s second-largest offshore wealth center (after Switzerland), managing US$1.1 trillion in foreign assets. More than a third of that originates in mainland China. A recent survey by KPMG of private wealth practitioners revealed that nearly half of Hong Kong’s assets under management could come from the mainland by 2023.

In financial terms, China still needs Hong Kong, particularly in the midst of a damaging trade war with the US. That is why Xinhua, China’s state media organization, issued a strong editorial on August 28 condemning the violent protests and warning that Hong Kong’s status as an international financial hub “should be cherished.”

Behind the scenes, China is working frantically to reduce its economic dependence on Hong Kong. It seems that neighboring Shenzhen has been selected as the most suitable replacement. In August, when it was proclaimed as the “model city for China and the world,” China’s central bank announced a relaxation of currency-conversion rules for the city. Many think it could take up to a decade for Shenzhen to catch up with Hong Kong. Until then, the protesters are probably safe from bloody suppression by the PLA and will have only the increasingly pugnacious Hong Kong police force to contend with.

That could all change very quickly, of course. If violence increases and Beijing can demonstrate a link, however tenuous, between protesters and terrorism, overt military intervention could be justified. The police report of a suspected Improvised Explosive Device (IED) found in the busy Mong Kok district on Sunday evening and an attack on a police officer at Kwun Tong MTR station earlier that afternoon by a suspect who slashed the officer’s neck with a sharp-edged object both fit that narrative.

China-controlled media were quick to pick up on the terrorism theme, as were many respected Western media outlets. The Beijing-controlled Global Times reported that these two attacks have “prompted experts to argue that such extreme tactics used by rioters on the weekend must be classified and treated as terrorism by authorities.”

Either way, Beijing’s revenge will come eventually, and those who can are already planning their escape. As the owner of one local bar put it: “China needs Hong Kong but it doesn’t need Hong Kong people.”