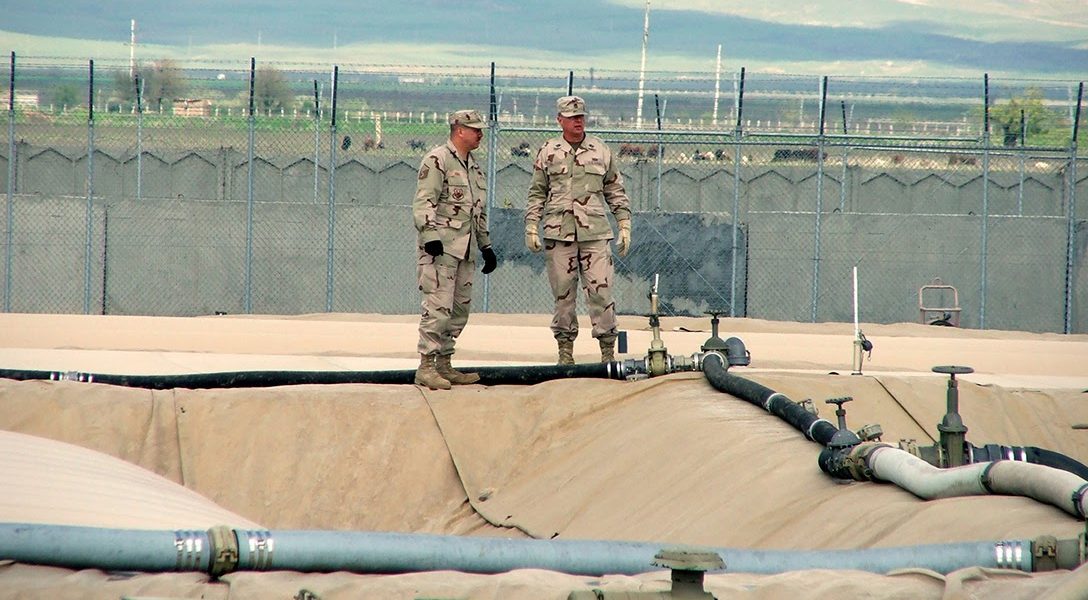 Weeks after the 9/11 attacks, US special operations forces landed at a military site in Uzbekistan called Karshi-Khanabad, or K2. Conveniently close to Taliban and al Qaeda targets in Afghanistan, the site served as an outpost for Army, Air Force, and Marine forces from 2001 to 2005.

Yet, while their eyes were set on one foe, the men and women who served at the Uzbek site weren’t told about another enemy right beneath their feet… the contaminated soil.

With “HAZARD” signs lacing the perimeter, K2 was a site where the soil oozed a black liquid and the groundwater glowed an ominous green. Nearly two decades after their deployment, this new enemy is linked to a series of cancers in servicemen and women who served at the base.

“After returning from combat years later, we are all coming down with various forms of cancer that the [Department of Veterans Affairs] is refusing to acknowledge,” retired Army Chief Warrant Officer Scott Welsch told McClatchy.

He was deployed to K2 in October 2001 and was diagnosed with thyroid cancer in 2014. His story is one of dozens of cases — all cancer, all K2 veterans, all diagnosed during the same period.

The US Department of Defense Knew of the Uranium

According to an ongoing investigation by McClatchy, there are documents showing that the US Department of Defense (DOD) was aware of contamination at K2 from the beginning. It was an old service base contaminated with “chemical weapons remnants, radioactive processed uranium and other hazards.” DOD was also aware of the soil oozing a toxic black goo.

According to documents dated from November 2001, DOD wrote off the risk as low, and advised “radiological air monitoring for uranium.” During the same time the US Army Center for Health Promotion and Preventative Medicine – Europe conducted an environmental baseline survey (EBS) as part of protocol.

The EBS revealed one- to three-meter-wide jet fuel plumes under the soil as well as asbestos and radioactive processed uranium thought to be the result of the destruction of Soviet missiles. The latter is especially problematic, as dust storms on the site were causing the contaminated soil to be swept into the air and into the lungs of service persons. The DOD report wrote off the findings, noting they felt the “health risks to be very small.”

Between 2001 and 2005, approximately 7,000 US ground forces were deployed to the base. By 2015, in an official report from McClatchy, the Army revealed 61 cases of cancer from K2 veterans. Yet, the victims speculate that, in reality, that number is higher.

Due to the secrecy of the assignments in the region where some men and women weren’t allowed to be reported by name, the Army’s official cancer estimates are thought to be lower than the actual number.

To date there are more than 300 self-reported cancer diagnoses from K2 service persons, suggesting the Army’s estimates of diagnoses to be as much as five times below accurate numbers. Further reports will be necessary in determining actual numbers of cancer cases.

Toxic Dust: The Invisible Legacy the US Left in Iraq

Last Secret of the Atom Bomb

In late 2019, a private Facebook group asked K2 veterans who were affected after serving on the toxic site to come forward. The group boasts more than 3,000 former and current service members. After a vetting process to ensure their service at the K2 base, the veterans’ cancer diagnosis and type are being documented.

“I’ve been wondering all of these years, ‘How many more, how many more. How many more?’” Kim Brooks, widow of Army Lt. Col. Timothy Brooks told McClatchy, adding that she saw the signs in her husband as early as 2002. She watched as his health slowly deteriorated, until he died of cancer.

“They told us we were exposed to some really bad stuff,” Brooks recalled her husband saying.

There are many spouses in situations similar to that of Kim Brooks. Together, with the veterans who are still fighting for their lives, several of them will soon travel to Washington to ask Congress for answers — and help.