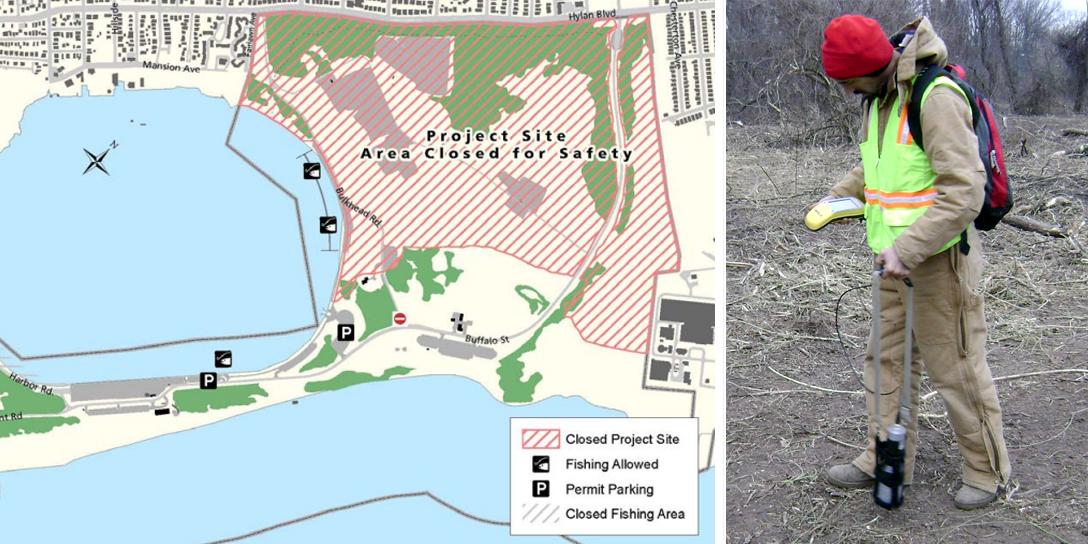 Last Secret of the Atom Bomb

In August 2005, the New York Police Department, with the Department of Energy, conducted an anti-terrorism radiation flyover survey. The survey was intended to provide a baseline of radiological activity, in order to catch a suspicious construction of a dirty bomb.

They didn’t find a dirty bomb—but there was plenty of radiological activity. Surveyors found 80 radioactive locations in the city—one of them being Great Kills Park in Staten Island, one of the city’s five boroughs. The Park is a popular place near a suburban enclave inhabited by cops, firefighters and other unsuspecting residents. The Park, more than 500 acres of woods surrounding softball and soccer fields and a marina, was constructed from garbage dumped in the bay between 1944 and 1946. Unregulated and illegal dumping has a long history in New York City.

The radium is the legacy of nuclear weapons production coupled with a cavalier attitude towards the odorless, tasteless and invisible threat posed by radioactivity.

“This is potentially a very dangerous situation,” said former Rep. Michael Grimm (R-NY) in 2013, whose congressional district includes the park. “The last thing I want is to have anyone or their children get sick or hurt because of this contamination.”

According to the Environmental Protection Agency (EPA), children are more susceptible than adults to radiation because they are still growing. Their cells are rapidly dividing, which provides a greater opportunity for radiation to disrupt the process than in adults. The main concern for children exposed to radium is leukemia, says international consultant Dr. Marvin Resnikoff, a spokesperson for Radioactive Waste Management Associates, which works on cleaning up radioactive waste dumps. Radium is chemically similar to calcium and has an affinity for bone where it irradiates the bone marrow.

Resnikoff told WhoWhatWhy that walking through Great Kills is like being “exposed to an X-ray machine you can’t turn off.” He added that children playing on the site could “get material on their hands and wipe their faces” causing “incidental ingestion” of radium.

The government measurements probably underestimate the actual radiation levels in Great Kills, according to Resnikoff.

“One foot of dirt can shield up to 98% of gamma radiation” given off by the radium, he said, adding that there could be significant levels of radium buried under the soil. Dr. Resnikoff said the diffuse nature of the contamination in the park indicates a lot of the contamination may be uranium ore left over from the Manhattan Project days.

A WhoWhatWhy investigation has shown that it is likely that the material stems from the World War II nuclear weapons program and was dumped into a public landfill by radium companies that were little more than public fronts for the United States government during its effort to build the first atomic bomb.

In 1939 the United States, convinced it was in a race with Germany for the bomb, purchased all the uranium it could find. Belgian owners of the ore coveted the phenomenally valuable radium that existed side-by-side with the uranium. When the price of radium collapsed a few years later as better and safer sources of radioactivity were developed, the excess and unneeded radium would end up in the public waste stream.

More radioactive “hotspots” were reported in Great Kills in 2007 as the government dug up contaminated soil and medical devices used in past decades to apply radium to cancerous tumors.

By 2009, half the park was closed indefinitely as more and more contamination was unearthed. In 2014 a community meeting was held in Staten Island with the National Park Service (NPS), which admitted that the radioactive contamination was greater than predicted.

“As we’re getting through this tough job, we’re finding that the contamination is not only in these discrete pockets, but is dispersed in the soil and also at the surface,” Kathleen Cuzzolino, an environmental protection specialist for the Park Service told The New York Times in 2013.

The NYPD initially said that the radioactivity in Great Kills was caused by “industrial” activities before the park was built. As the extent of the contamination was revealed, that story became less and less believable. The government embarked on a decade-long study of the contamination. What began as a few hotspots around discarded medical waste gradually evolved into a widespread and expensive problem. Eventually, the NPS announced that up to “1,200 discrete areas” of the park were contaminated with high radiation levels and also admitted that dozens of spots, some with radiation levels up to 200 times normal had also been found throughout the park.

After another flyover earlier this year, a new five-year study was announced under CERCLA, the Comprehensive Environmental Response, Compensation, and Liability Act. Known as the Superfund, it is the legal mechanism for cleaning up some of the nation’s most polluted areas. During cleanup, the areas contaminated by radiation remain closed off to the public.

The Centers for Disease Control and Prevention (CDC) public health assessment categorized the radioactive contamination at Great Kills as an “indeterminate public health hazard.” That means the agency doesn’t have enough information to make a “professional judgement” on the potential damage to the public at Great Kills.

The report also warns that radiation exposure on children requires special considerations. Yet despite the construction of 18,000 feet of “perimeter fencing” and warning signs against trespassing, huge gaps within walking distance of playgrounds in this residential neighborhood allow easy access to the closed-off areas.

But Where is the Radioactive Material From? An investigation by WhoWhatWhy is beginning to fill in some of the unknowns about where the radioactive material plaguing Great Kills came from. The story begins with a company called Radium Chemical, and its main chemical squeeze, radium, a highly radioactive element that glows in the dark. Radium Chemical made a product called “Undark.”

In the 1920s, young girls were employed by the factory to paint luminescent dials using radium. Supervisors ordered the women to lick the thin paint brushes after each stroke to keep the tips pointed and the strokes precise.

The women realized something was wrong when horrific tumors began to grow in their jaws. Heading straight for the bone, the radium replaced calcium and caused the lower jaws of the woman to literally fall apart. The young women, many as they lay dying, filed lawsuits, but few received compensation and their suffering was soon forgotten.

The owners escaped liability by morphing into new companies under different names and slightly different boards of directors. Still, the ownership of the radium always seemed to trace back to Joseph A. Kelly Sr., a pioneer in marketing radium. His interlocking network of radium paint companies would become one of the largest World War II government contractors by supplying luminescent dials for fighter planes and bombers. He would also quietly become a major supplier of radium and other rare elements used in the Manhattan Project.

The radium business was long over when the cleanup bill came due. In 1983 Kelly’s son Joseph Jr. agreed to remove 140 grams of radium from his abandoned one-story brick Radium Chemical Company factory in Woodside, Queens. The massive clean up in this quiet industrial corner of the city would cost New York State at least $6 million. Meanwhile Kelly was only required to pay $500,000 in “personal liability” based on the value of his assets.

Kelly had made other agreements regarding heavily-polluted sites the company also owned in Georgia and Illinois, which ultimately ended up stiffing the states with the cost of cleanup. In Queens that cleanup apparently extended to the city sewer system.

“Although it’s not known exactly what Radium Chemical was doing at this address,” former New York state Assemblyman Maurice D. Hinchey said, ”it would appear that radium particles were washed down through the plumbing system.”

One gram of Radium-226, the isotope contaminating Great Kills Park and the most common form of the element, emits a massive amount of dangerous radiation—as much as three tons of depleted uranium. Imagine a spot of salt in your hand equal to enough raw ore to fill your living room, emanating indelible amounts of cancer causing radiation.

Even more contamination was found at another Radium Chemical site on East 44th Street, now the site of a luxury high-rise. The New York Times reported in 1988 that there may have been as many as 13 radium-processing facilities owned by Radium Chemical Company operating in the city.

Safety considerations were almost unknown during the war effort. According to Manhattan Project troubleshooter George A. Cowan, his radiation monitor “went berserk” on a 1943 trip to the Radium Chemical Company offices in a “big building” on Sixth Avenue.” In his memoirs Cowan wrote that workplace conditions that would be illegal today were commonplace.

“I checked out the primitive chemical hood I was directed to use to make the [Radium-Beryllium] neutron source,” Cowan wrote. “I went to the roof of the building where air from the hood was released,” and was appalled to find that “the roof was unacceptably radioactive.”

Radium Chemical may not be alone in carrying blame for Great Kills. Throughout the 20th century, Radium Chemical had one major competitor, International Rare Metals Refinery, Inc, also known as the Canadian Radium and Uranium Corp., located 40 miles north of the city in the hamlet of Mt. Kisco. Boris Pregel, an agent for International Rare Metals Refinery, negotiated a deal that the company would sell its uranium to the Manhattan Project for its bomb, and keep its radium to sell. In 1939, a barge from Africa arrived at the warehouse Pregel administered under the Bayonne Bridge near the colonial-era town of Port Richmond on Staten Island. The barge was loaded with 1200 tons of high-grade uranium ore packed in burlap sacks containing the  uranium that would fuel the atom bomb. The site of this warehouse remains radioactive to this day.

In the US, the uranium was fed into the massive nationwide bomb-making complex. Some of the uranium was used as fuel in the great Hanford reactors making plutonium on the Columbia River and some went to Oak Ridge for enrichment. The bomb project would soon be located in every corner of the country. Increasingly radioactive “dregs” of the ore—as it was further and further processed—would eventually return to New York City for radium extraction at Mt. Kisco. Polonium, another strategic radioactive element would also be extracted as part of the payment for the uranium ore.

Time to Own Up

In 1957, International Rare Metals Refinery, Inc was targeted in New York State’s first prosecution for exposing employees to excessive radiation but a judge suspended the fine. Waste from the demolition of the factory was reportedly hauled to Croton, New York, where a federal judge said unrestricted dumping had turned the landfill into “an environmental time bomb.”

Based on a tip, a reporter for a local newspaper in 1979 used a borrowed geiger counter to scan the site, walking along railroad tracks where the building had once stood while the detector was held near the ground. The audible sound of the “counts” would speed up as the radiation levels surpassed natural background levels. The New York State Health Department looked into it and admitted that there was radioactivity higher than background levels but reported that there was ”no health hazard” to the public.

This, of course, is not the case. Radium fell out of use by the 1960s, and today is rightfully seen as a dangerous carcinogen. It presents a threat whether as a potential terrorist weapon or hidden by willful ignorance and neglect in a children’s playground—such as Great Kills.

So just how long until it’s taken care of? Radium has a half life of 1,600 years. Unless major initiatives are taken, it’ll long outlive any of us.

11 responses to “Last Secret of the Atom Bomb”