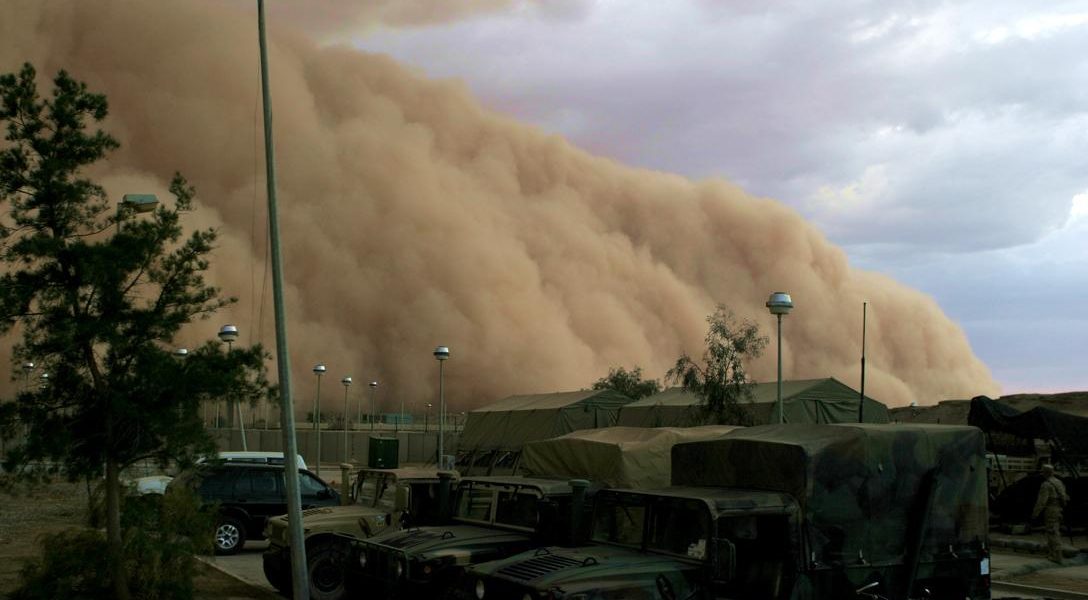 A massive sand storm cloud is close to enveloping a military camp as it rolls over Al Asad, Iraq. Photo credit: US Marine Corps
Video

Toxic Dust: The Invisible Legacy the US Left in Iraq

A weapon of mass destruction (WMD) is defined as one that can cause indiscriminate death or injury on a large scale. One of the weapons the American military used in Iraq fits that definition — only it was a much more insidious substance, quiet, slow-acting, and persistent.

It’s called depleted uranium (DU) and takes the form of a brown, radioactive, super-fine dust that is everywhere — in the air, in the sand, in the water supply, inside houses and tents, on top of clothes in closets, on the sheets and pillows, on hair and toothbrushes.

Once a particle gets into the body, it irradiates its immediate surroundings forever, causing all kinds of damage — cancers including leukemia, organ damage, toxic encephalopathy, cognitive dysfunction, and birth defects.

The dust is formed when a projectile containing a core made of depleted uranium strikes an armored target. The rapid release of energy upon penetration of the target causes near instantaneous vaporization, and the release of a radioactive aerosol.

Depleted uranium (DU) is a waste product from the nuclear industry, formed when uranium is milled and enriched. It is cheap, and extraordinarily dense. It can pierce the hardest armor.

It remains in several places in Iraq and, though last used in 2004, it continues to claim victims to this day. A number of them are American soldiers. According to the International Action Center/Poison DUst Project,

Today, half of the 697,000 US Gulf War troops from the 1991 war have reported serious medical problems and a significant increase in birth defects among their newborn children.

The effects on the Iraqi population are far greater. Many other countries and US communities near DU weapons plants, testing facilities, bases and arsenals have also been exposed to this radioactive material which has a half-life of 4.4 billion years.

Military doctors have been slow to admit the cause of their symptoms. Some have refused to test them, others have “lost” their test results, and still others seem skeptical of tests performed by outside doctors. Many of these victims have been told their problems are “psychosomatic.”

For the personal stories of these soldiers, victims of their own military establishment, watch this: