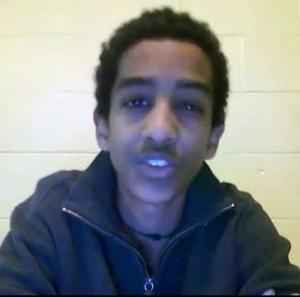 The latest development in this blockbuster drama came during the trial and conviction of Robel Phillipos, friend of accused Marathon bomber Dzhokhar Tsarnaev. A jury on Oct. 28 convicted him on two counts of lying to investigators, for which he now faces up to 16 years in prison.

Jurors found he’d made false statements during two interviews with the FBI within days of the April 15 bombing. Specifically, he was convicted for lying about his whereabouts on the night of April 18. Phillipos, 19, said he was “stoned out of his mind” on marijuana at the time, and that’s why he gave the conflicting statements, according to his defense attorney.

This trial fits squarely with the particular public image of the Tsarnaevs and their friends that has arisen from media coverage and the government pronouncements in it. Anyone remotely involved with the brothers is immediately judged to be part of a nest of conniving terrorist sympathizers. That’s certainly no presumption of innocence. Phillipos undoubtedly faced this added burden in his trial.

Taken together with a steady stream of leaks about the bombing investigation, it’s clear the government wants to ensure it will have a slam-dunk case against Dzhokhar Tsarnaev at his trial in January. Yet it doesn’t have to go the extra mile, thanks to a tried-and-true FBI method that was on display in Phillipos’ trial.

Testimony during Phillipos’ prosecution elicited obvious contradictions in the government’s case, and demonstrated how the FBI’s interviewing methods stack the deck in its favor, every time.

First, let’s take a look at the discrepancy in the government’s case, which surfaced during FBI Agent Timothy Quinn’s testimony. Quinn, who interviewed Phillipos, told prosecutors when he testified on Oct.15 that the defendant told him he wanted to help the FBI “nail the mother***ker,” referring to Dzhokhar Tsarnaev. Quinn then stated that he didn’t believe Phillipos.

That story only lasted until the cross-examination by Phillipos’ attorney, when Quinn said the defendant was highly cooperative. (In point of fact, Phillipos agreed to be interviewed multiple times without a lawyer.)

Off the Record But Don’t Argue It

There was another disparity in the facts that arose, which was central to Phillipos’ case and to understanding how powerful FBI interviews are as prosecutorial weapons.

The dispute hinged on when Phillipos arrived at Dzhokhar’s dormitory room, and who was with him. Prosecutors pointed to a written confession in which Phillipos said he showed up with two Tsarnaev friends. Yet Phillipos’ attorney pointed out that the trial had already established that one of those people was in the room long before the defendant arrived.

What does all that mean? That Phillipos’ confession had factual errors. Moreover, it suggests that the written statement was coerced or included false information colored by what Phillipos’ interrogator told him. At the very least, it does lend credence to the notion that he does not accurately remember the night’s events.

It also tells us something about the tricky issue of “making false statements.” As Phillipos’ defense attorney pointed out numerous times, none of the FBI interviews were recorded electronically, either with video or sound. There’s no way for a third party to verify what actually went on in those interviews.

Hard to believe that in this day and age, right?

Boston area defense attorney and civil liberties advocate Harvey Silverglate has written extensively on the FBI’s non-recording policy and its potential for abuse. He summarizes the inherent problem with the FBI’s policy this way:

FBI agents always interview in pairs. One agent asks the questions, while the other writes up what is called a “form 302 report” based on his notes. The 302 report, which the interviewee does not normally see, becomes the official record of the exchange; any interviewee who contests its accuracy risks prosecution for lying to a federal official, a felony.

So, as Silverglate points out, something as simple as arguing an FBI agent’s interpretation of what was said, or what they think they heard, opens up an individual to threats of prosecution similar to what Phillipos faced.

Not only that, juries must place their faith entirely in the honesty of the testifying agent. Yet lying under oath by law enforcement is so common it’s been given its own name: “testilying.”

Regardless of what transpired in those interviews, 16 years behind bars seems extreme for the charge of “making false statements.” Even The Boston Globe, not known for its evenhanded coverage of the Marathon bombing, recently ran an editorial questioning the wisdom of putting a young man behind bars for that long because of what appeared to be a stupid mistake.

What could possibly be worth the state expending so many resources to prosecute and then incarcerate this individual for as long as 16 years?