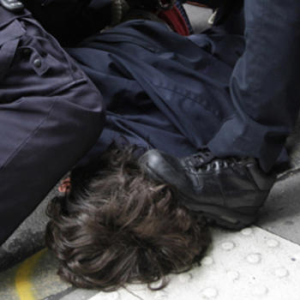 Will cameras stop this kind of police treatment?

The state of modern American law enforcement went on garish display in Ferguson, Missouri, as police from multiple municipalities donned military gear and descended upon the town like an occupying army.

While the focus was on the equipment they carried and the racial issues, there’s a more crucial matter Ferguson raised: who is reining in the errant behavior of police officers?

Officers like Lt. Ray Albers, who aimed his assault rifle at peaceful protestors and journalists while barking such orders as “I will f***ing kill you, get back!”—while he knew his words and behavior were being recorded and livestreamed for the world to see.

And then there’s Officer Dan Page, who rose to national prominence after shoving a CNN journalist on camera. He got suspended from duty not for that, but for an earlier videotaped speech he gave at an Oath Keepers meeting:

“I personally believe in Jesus Christ as my lord and savior, but I’m also a killer. I’ve killed a lot. And if I need to, I’ll kill a whole bunch more. If you don’t want to get killed, don’t show up in front of me. I have no problems with it. God did not raise me to be a coward… I’m into diversity — I kill everybody. I don’t care.”

These are some of the individuals entrusted with police authority and military gear. Knowing Page’s and Albers’ names and faces made them unusual among their colleagues occupying Ferguson. But which officers fired tear gas and bean bags at TV news teams early in the protests? Who operated the sound cannons to disorient protestors before commanding them to disperse?

Those specifics aside, Ferguson has fast-tracked an important debate: whether all officers should be wearing body-mounted cameras. There’s already a petition at the White House for a “Mike Brown Law” to require all officers to wear cameras, so named for the young man whose shooting by police touched off Ferguson.

The arguments in favor have united what are ordinarily opposing sides in the debate over police powers. Both the American Civil Liberties Union and law enforcement supporters have said they’re a good idea, albeit for different reasons. Broadly speaking, the idea is to protect citizens from bad policing and honest cops from false accusations.

Already, though, the ubiquity of cameras has shown a glimpse of what a fully recorded future of police-public interactions might hold. The question is whether that will lead to better relations.

When No One’s Watching

Footage out of Ferguson showed how some American police treat innocent people when they know the world is watching. If they behave this badly in front of witnesses, what do some officers do when no one is watching?

One apt example can be found in Officer Daniel Holtzclaw, arrested in August on suspicion of raping at least eight women while on duty, threatening to arrest them if they didn’t comply with his demands. Holtzclaw’s victims knew he had the status quo on his side: in the absence of any evidence, the accusation of a lone cop would suffice to arrest an innocent woman.

And if there’s no evidence, some officers are willing to plant it to make a case. In 2011, a former narcotics detective for the NYPD testified that he and his colleagues routinely planted drugs on people to make their arrest quotas.

The news surprised nobody who pays attention: former U.S. attorney and New York criminal judge Irving Younger warned in 1967 that the criminal justice system gave cops plenty of “unique opportunities (and unique temptations) to commit perjury. Yet the long-established practice of “testilying” resurfaces as a problem decade after decade, and remains rampant today with no solution in sight.

So half a century ago, the existence of lying police officers was already an open secret in the American legal system. And worse still: even cops proven to be liars don’t necessarily face any consequences.

Take the case of six Milwaukee officers who were found to have impeded an investigation by prosecutors into a police practice of carrying out illegal strip and body cavity searches on drug suspects:

“One officer told authorities she had not witnessed an improper search even though a video showed she was standing just a few feet away. Five others were suspected of violating a court order …. The six officers may have broken the law or violated department rules, the video and documents show, but none of them faced criminal charges or discipline by the Police Department,” the Milwaukee Journal Sentinel wrote.

Of course they didn’t. There are six cops in Milwaukee today who still wield legal authority over fellow citizens, despite a record of them helping other officers commit crimes against people and/or hampering any efforts to stop it.

All the Way to the Supreme Court

The notion that impunity for law enforcement has its place in law enforcement has even reached the Supreme Court. In 2009, when current Justice Elena Kagan was Solicitor General defending the government, she argued in Pottawatomie v. McGhee that prosecutors who fabricate evidence to convict innocent people should retain their absolute immunity from lawsuits.

Failing to preserve immunity, she argued, would force prosecutors to divert their energy toward defending themselves instead of enforcing the law. The wrongfully convicted have other avenues of restitution, she wrote:

In the exceedingly rare case in which provable wrongdoing by a prosecutor is left uncompensated, “it has been thought in the end better to leave unredressed the wrongs done by dishonest officers than to subject those who try to do their duty to the constant dread of retaliation.”

In the Pottawatomie case, the crime in question was murder. So Kagan’s argument was, in essence, that even if innocents go to prison while killers walk free, dishonest prosecutors still shouldn’t be held accountable for framing someone who isn’t guilty.

Once upon a time the legal fiction of inherent police trustworthiness might’ve been a necessary evil, but ubiquitous and inexpensive recording technology has made that excuse vanish. Why not require police testimony be backed by audiovisual records?

Even before Ferguson, various municipalities throughout the U.S. started requiring officers to wear body cameras at all times while on duty (in addition to the dashboard cams already found in many, though not all, police cars). A real-time experiment by the Rialto, California, police department, in which officers were made to record their on-duty actions, had stunning results. The use of force by police officers declined over 50% and complaints against them by the public fell by nearly 90 percent.

Of course, that still leaves the problem of police deliberately turning off their cameras before engaging in questionable activity. For example, the Daytona, Florida, police department fired two officers who arrested a female drug suspect. One officer switched his camera off in the middle of the apprehension. The woman ended up hospitalized with her teeth knocked out. The telling video was missing.

Yet even the issue of police turning off body cameras or “losing” dashcam footage wouldn’t be such a problem if the legal system would abandon the stubborn belief in proven fictions: that police are always telling the truth when they’re on the witness stand, and that their word is better than that of a suspect.

4 responses to “Cops, Cameras and The Thin Blue Lie”