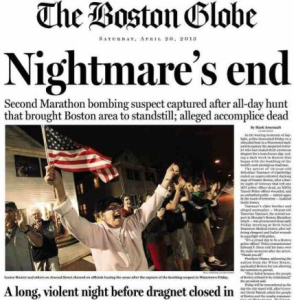 The Boston Globe’s coverage of the Marathon bombing “was marked by an overload of inflammatory themes, words, phrases, and passages,” according to a media content analysis commissioned by Dzhokhar Tsarnaev’s defense team.

Predictably, however, the Globe’s portrayal of the study is, well, a little selective.

The findings of the analysis, conducted by Edward J. Bronson, a trial venue expert and professor emeritus at California State University-Chico, are laid out in a sworn declaration filed on Aug. 7. It’s part of the defense effort to get the trial moved from Boston.

The analysis was done in conjunction with a survey which sought to measure the levels of bias regarding Tsarnaev’s guilt in the four cities where the trial could be held: Boston, Springfield, Manhattan, or Washington, D.C. Bronson recommended the trial be moved to Washington.

In its description of the declaration, however, the Globe provides us with some of Bronson’s blander conclusions. For instance, we’re told that the phrase “terror” and “terrorist” and related terms were used more than 1,400 times in the Globe’s reporting on the marathon bombing. Terrorist was used more than 620 times, although often not to characterize Tsarnaev. Rather, it was used in phrases like “terrorist attack.”

The newspaper, to its credit, did include this one: “The inflammatory coverage of the Boston Bombing case, even viewed solely through the Globe’s content, was overwhelming and thus extremely prejudicial,” Bronson wrote.

But that’s about it. The Globe then spends a good deal of ink highlighting the few limitations of the analysis Bronson acknowledged in his declaration, standard practice for any content analysis. For instance: “In a footnote, Bronson conceded that many of the more than 2,420 Globe articles he cited were not about the bombings but only referred to them.”

In other words, the Globe got a lot of mileage out of the story by shoehorning it into unrelated articles.

Here are some of the more notable passages from the declaration about the Globe’s reporting that didn’t make it into the article:

•  The use of these inflammatory and emotive terms is so extensive, varied, and almost uniformly prejudicial in that it matches or exceeds any other capital case I have studied in over 40 years.

•  A major concern in the nature of the media coverage and a source of substantial prejudice in the case is the fact that much of the coverage was guilt-oriented, creating a strong presumption of the defendant’s guilt.

•  It would be very difficult for any juror exposed to much of the significantly and consistently prejudicial publicity to accord the defendant any meaningful presumption of innocence.

•  My analysis under the category Nature of the Publicity demonstrates an extraordinarily high level of inflammatory publicity that also describes the defendant’s apparent guilt. I saw few references to any exculpatory facts or evidence.

From the beginning, WhoWhatWhy has been critical of the alarming rush to judgment and the jingoistic kumbaya that characterized much of the reporting. That reporting has convinced a significant majority of Bostonians of Tsarnaev’s unquestioned guilt.

Bronson’s analysis is an attempt to quantify the phenomenon, and it’s worth reading for its insight into how the public’s opinions are formed around major events. One need only spend a few minutes on this page to experience the “overload of inflammatory themes, words, phrases, and passages” that have been bandied about for more than a year now.

With that in mind, it is only natural that the Globe, Boston’s go-to newspaper, would write reams and reams of articles about such a high-profile event. And by expectation and necessity, mainstream outlets like the Globe hew close to an official narrative spun out of an unending stream of leaks.

That does not, however, absolve the court from considering what effect such “inflammatory” saturation coverage has had on potential jurors in Boston.