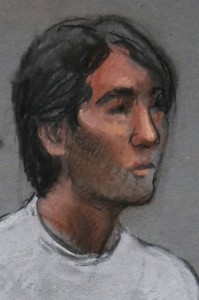 Another friend of the accused Boston Marathon bombers is claiming brutal treatment at the hands of law enforcement. This time the alleged perpetrators aren’t FBI agents, they’re prison guards.

Tsarnaev friend Khairullozhon Matanov, a 23-year-old immigrant from Kyrgyzstan, was arrested in May on obstruction of justice charges and is currently in federal custody awaiting trial. He’s being held at the Plymouth County Correctional Facility in Plymouth, Massachusetts. He was under law enforcement watch for roughly a year. After the bombing, the authorities stepped it up to include aerial surveillance.

Matanov’s case is wholly peripheral to the Boston Bombing investigation. He is accused of deleting files from his computer and allegedly trying to mislead investigators about his friendship with the Tsarnaevs. The charges against him appear to be “vindictive overreach,” according to the Boston Globe, which has rarely questioned the official narrative of the bombing.

So why do his allegations of abuse matter, above and beyond ordinary concern about the treatment of prisoners? Because they are part of a pattern of intimidation, deportation, punishment and even fatal violence against friends of accused bombers Dzhokhar and Tamerlan Tsarnaev***

In a letter provided to WhoWhatWhy, Matanov claims that, while being restrained by multiple guards, another guard called him a “Muslim terrorist” and kicked him in the head, knocking him unconscious and giving him a concussion. He says this was after guards had already covered him in pepper spray.

And, Matanov alleges, that same particularly brutal guard shoved his finger into his eye, causing it to swell and fill with blood. According to this account, the guards then left him—still coated with pepper spray—restrained in a chair for nearly three hours.

The Plymouth jail is run by the Plymouth County Sheriff’s office. Since Matanov is facing federal charges, however, his imprisonment is the responsibility of the U.S. Marshals Service, which often uses detention centers run by other agencies.

“I Couldn’t Take it Anymore.”

Matanov also complains of general “harassment” from guards and other inmates—although exactly what that consists of is not entirely clear from the letter.

The brutal treatment started, Matanov claims, after he flooded his cell by clogging the toilet and repeatedly flushing it. This was, apparently, an act of desperation. He writes: “They harass me so much I couldn’t take it anymore, and I flood out my cell again [sic].”

Exactly who was tormenting him in this particular instance is not clear.

Matanov claims that “when they [the guards] came to get me in their suits they played the national anthem of the U.S.A.” And they play the anthem, he says, whenever they “have an argument with me.”

After refusing to be handcuffed through an opening in the door—a common security protocol that allows guards to cuff an inmate before opening his or her cell–Matanov was hit twice with pepper spray, he says. He then allowed himself to be handcuffed, and was lying on the floor when he says seven guards “jump on me so badly [sic].”

Matanov’s attorney, Edward Hayden, told WhoWhatWhy that he saw his client the day after the flooding incident, which Hayden said happened Oct. 22. Matanov, he noted, had a black eye and scrapes on his body. The attorney says he was alerted to the incident by a phone call from another inmate.

These most recent events culminated a long period of rising tension and duress.. Last July, less than two months into Matanov’s imprisonment, Hayden expressed concern that the conditions of confinement had negatively affected his client’s physical and mental well-being—to the point that Matanov struggled to answer questions lucidly. He characterized his client’s incarceration as “solitary confinement.” In a recent interview with Boston Magazine, Hayden generally corroborated what he told WhoWhatWhy— that there have been a series of “problems” at the Plymouth County Correctional Facility with his client and that he has been trying to have him moved elsewhere. However, he didn’t describe for the magazine what those problems were.

Admittedly, jail is not intended to be a pleasant experience. Nonetheless, the apparent treatment of  Matanov—who has not been convicted of any crime, and who had nothing to do with the Boston Marathon bombing—is cause for deep concern if not outright alarm.