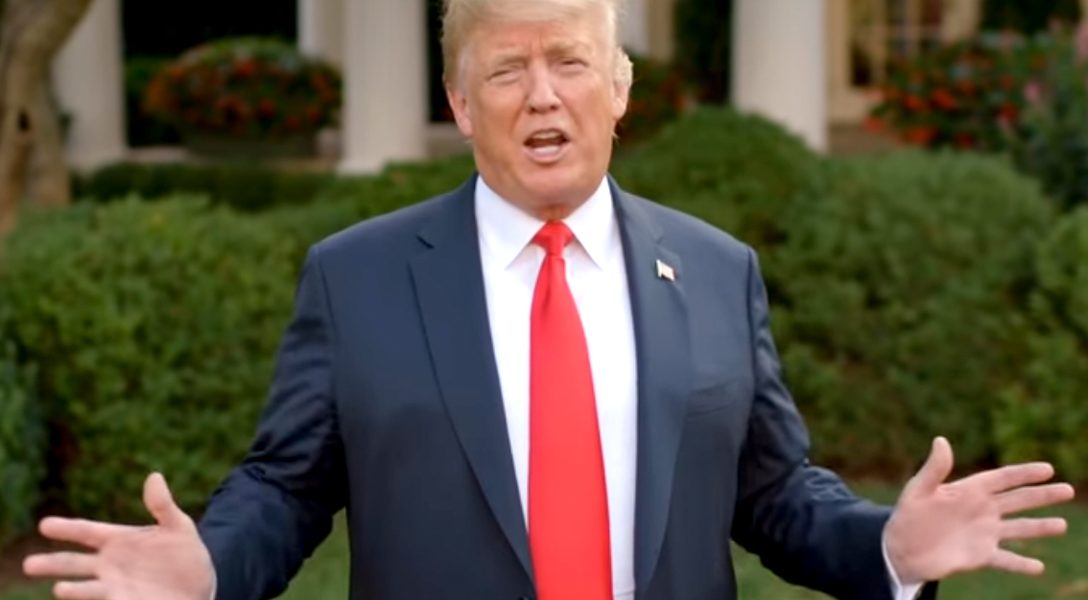 A Trump Treasury of Tweets, Part 5

“Actions speak louder than Tweets, but not nearly as often.” — Mark Twain

“The lady doth Tweeteth too much, methinks.” — William Shakespeare

“Tweets empty as the wind are best left unsaid.” — Homer

Welcome to our fifth Trump Treasury of Tweets. We like to take these occasional opportunities to reflect on the large and varied collection of tweets that the president has shared with the world, and pick out our favorites.

Some people take offense at the president’s way of communicating, and dislike how he expresses himself on Twitter. They use fancy adjectives like “boorish” and “uncouth” and “uncultivated.” But as the president himself has shown us, sometimes you have to disregard common sense and what everyone else is telling you and look directly into the sun, even if it’s hard to do.

Here’s another one: the president sometimes gets a pass. There’s a lot of talk right now about Silicon Valley and censorship. Just recently Twitter suspended a popular poster who made a bad joke trolling white supremacists. But when you’re the president and you threaten the destruction of another sovereign nation, well, we apparently just have to understand that there are “big people” rules and “little people” rules.

Besides, what is Twitter supposed to do? Suspend the President of the United States of America?

And seriously, the president is the last person you should be concerned about — did not Melania Trump express her wish to fight cyberbullying? Would she really lead an anti-cyberbullying campaign if her husband were, himself, one of the biggest cyberbullies around? That sounds like something a Hollywood-type would come up with for a reality-TV show plot.

We have no doubt that historians and political scientists and psychologists will be studying these tweets many years from now to better understand the many sides of President Donald Trump: Trump the commander-in-chief. Trump the family man. Trump the reality-TV star. Trump the casino mogul. Trump the evangelical. Trump the golfer.

History is happening right in front of our eyes, and we get to participate through the power of Twitter. Heck, you can tweet right back at the president if you like. There’s even a chance he may see it at 5 a.m. when he’s curiously awake and tweeting — while he takes care of other presidential business.

That’s what participatory democracy is all about.

In case you missed our past collections, you can check out here parts 1, 2, 3, and 4. And don’t forget to follow us on Twitter!

Disgraced and discredited Bob Mueller and his whole group of Angry Democrat Thugs spent over 30 hours with the White House Councel, only with my approval, for purposes of transparency. Anybody needing that much time when they know there is no Russian Collusion is just someone….

The Failing New York Times wrote a story that made it seem like the White House Councel had TURNED on the President, when in fact it is just the opposite – & the two Fake reporters knew this. This is why the Fake News Media has become the Enemy of the People. So bad for America!

Wow! Big pushback on Governor Andrew Cuomo of New York for his really dumb statement about America’s lack of greatness. I have already MADE America Great Again, just look at the markets, jobs, military- setting records, and we will do even better. Andrew “choked” badly, mistake!

Just announced, youth unemployment is at a 50 year low! @foxandfriends

The local politicians who run Washington, D.C. (poorly) know a windfall when they see it. When asked to give us a price for holding a great celebratory military parade, they wanted a number so ridiculously high that I cancelled it. Never let someone hold you up! I will instead…

When you give a crazed, crying lowlife a break, and give her a job at the White House, I guess it just didn’t work out. Good work by General Kelly for quickly firing that dog!

.@MarkBurnettTV called to say that there are NO TAPES of the Apprentice where I used such a terrible and disgusting word as attributed by Wacky and Deranged Omarosa. I don’t have that word in my vocabulary, and never have. She made it up. Look at her MANY recent quotes saying….

…really bad things. Nasty to people & would constantly miss meetings & work. When Gen. Kelly came on board he told me she was a loser & nothing but problems. I told him to try working it out, if possible, because she only said GREAT things about me – until she got fired!

Hundreds of Bikers for Trump just joined me at Bedminster. Quite a scene – great people who truly love our Country!

The NFL players are at it again – taking a knee when they should be standing proudly for the National Anthem. Numerous players, from different teams, wanted to show their “outrage” at something that most of them are unable to define. They make a fortune doing what they love……

…..Be happy, be cool! A football game, that fans are paying soooo much money to watch and enjoy, is no place to protest. Most of that money goes to the players anyway. Find another way to protest. Stand proudly for your National Anthem or be Suspended Without Pay!

Space Force all the way!

California wildfires are being magnified & made so much worse by the bad environmental laws which aren’t allowing massive amounts of readily available water to be properly utilized. It is being diverted into the Pacific Ocean. Must also tree clear to stop fire from spreading!

Democrats want Open Borders and they want to abolish ICE, the brave men and women that are protecting our Country from some of the most vicious and dangerous people on earth! Sorry, we can’t let that happen! Also, change the rules in the Senate and approve STRONG Border Security!

Fake News reporting, a complete fabrication, that I am concerned about the meeting my wonderful son, Donald, had in Trump Tower. This was a meeting to get information on an opponent, totally legal and done all the time in politics – and it went nowhere. I did not know about it!

The Fake News hates me saying that they are the Enemy of the People only because they know it’s TRUE. I am providing a great service by explaining this to the American People. They purposely cause great division & distrust. They can also cause War! They are very dangerous & sick!

Lebron James was just interviewed by the dumbest man on television, Don Lemon. He made Lebron look smart, which isn’t easy to do. I like Mike!

Collusion is not a crime, but that doesn’t matter because there was No Collusion (except by Crooked Hillary and the Democrats)!

Wow, highest Poll Numbers in the history of the Republican Party. That includes Honest Abe Lincoln and Ronald Reagan. There must be something wrong, please recheck that poll!

What kind of a lawyer would tape a client? So sad! Is this a first, never heard of it before? Why was the tape so abruptly terminated (cut) while I was presumably saying positive things? I hear there are other clients and many reporters that are taped – can this be so? Too bad!

Our Country is doing GREAT. Best financial numbers on the Planet. Great to have USA WINNING AGAIN!

Tariffs are the greatest! Either a country which has treated the United States unfairly on Trade negotiates a fair deal, or it gets hit with Tariffs. It’s as simple as that – and everybody’s talking! Remember, we are the “piggy bank” that’s being robbed. All will be Great!

Inconceivable that the government would break into a lawyer’s office (early in the morning) – almost unheard of. Even more inconceivable that a lawyer would tape a client – totally unheard of & perhaps illegal. The good news is that your favorite President did nothing wrong!

Twitter is getting rid of fake accounts at a record pace. Will that include the Failing New York Times and propaganda machine for Amazon, the Washington Post, who constantly quote anonymous sources that, in my opinion, don’t exist – They will both be out of business in 7 years!

I have accepted the resignation of Scott Pruitt as the Administrator of the Environmental Protection Agency. Within the Agency Scott has done an outstanding job, and I will always be thankful to him for this. The Senate confirmed Deputy at EPA, Andrew Wheeler, will…

After having written many best selling books, and somewhat priding myself on my ability to write, it should be noted that the Fake News constantly likes to pore over my tweets looking for a mistake. I capitalize certain words only for emphasis, not b/c they should be capitalized!

Wow! Big Trump Hater Congressman Joe Crowley, who many expected was going to take Nancy Pelosi’s place, just LOST his primary election. In other words, he’s out! That is a big one that nobody saw happening. Perhaps he should have been nicer, and more respectful, to his President!

Congresswoman Maxine Waters, an extraordinarily low IQ person, has become, together with Nancy Pelosi, the Face of the Democrat Party. She has just called for harm to supporters, of which there are many, of the Make America Great Again movement. Be careful what you wish for Max!

.@jimmyfallon is now whimpering to all that he did the famous “hair show” with me (where he seriously messed up my hair), & that he would have now done it differently because it is said to have “humanized” me-he is taking heat. He called & said “monster ratings.” Be a man Jimmy!