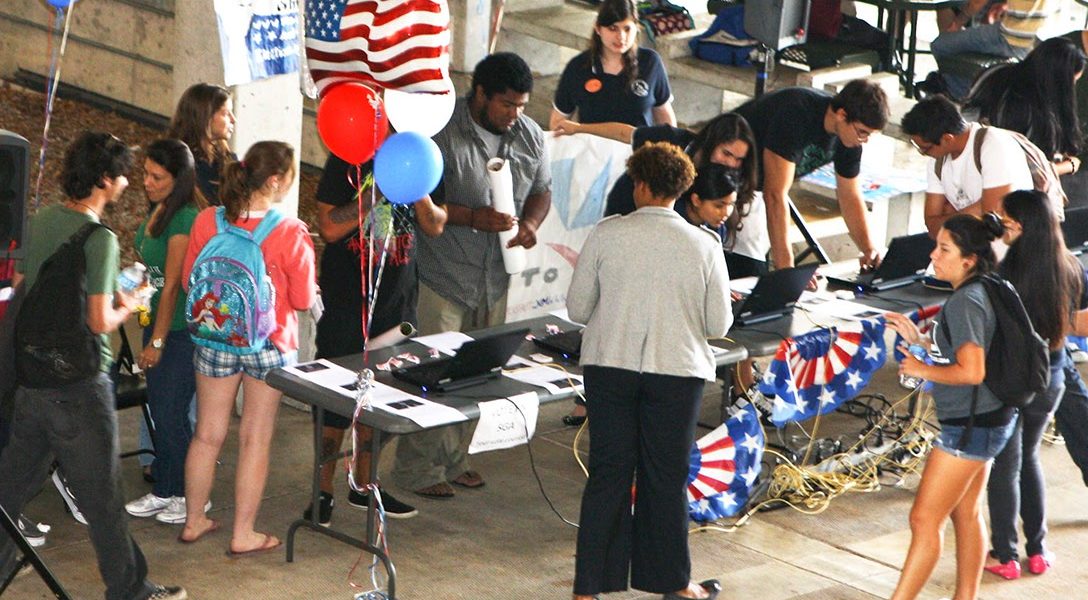 ‘We Did It’: Voting-Rights Advocates Laud Early-Voting Expansion for Students

Voting-rights groups celebrated a major victory Friday for college students ahead of the 2020 election: Florida colleges and universities will be allowed to host early-voting polling places on campus this November — without having to worry about there being enough parking.

The six-year legal battle began in 2014, when then-Secretary of State Ken Detzner (R) issued a directive that made it impossible for college students to vote on campus. It barred Florida colleges and universities from having an early-voting polling place on campus because Detzner did not consider a student union building on campus to be an acceptable early-voting site.

The Andrew Goodman Foundation joined the League of Women Voters and University of Florida students in a federal lawsuit, alleging that Florida discriminated against voters on the basis of age. US District Court Judge Mark Walker agreed that the ban “reek[ed] of pretext” in his 2018 ruling, and 12 early-voting polling sites were set up at 10 Florida colleges and universities just in time for the 2018 midterm election.

After the ban was successfully challenged in federal court, however, the Florida state legislature “snuck in” a provision in its bill to restore felon voting rights. The last-minute provision required any early-polling places have “sufficient, non-permitted” parking for voters, said Yael Bromberg, chief counsel for voting rights at the Andrew Goodman Foundation.

“We are gratified that once again the constitutional rights of our young voters have superseded partisan politics.”

Megan Newsome, a University of Florida alumna and former Vote Everywhere ambassador with the Andrew Goodman Foundation, believed it was unconstitutional for the state to bar her campus from having an early-voting polling place.

The university’s student union had been challenging the ban in court without success for more than three years. So, Newsome met with state lawmakers to try to fix the problem via legislation. She penned an op-ed during her senior year to raise awareness about how severe college student disenfranchisement in Florida was, after one lawmaker told her that students should be willing to walk from campus to vote if they really wanted to cast a ballot:

The closest early voting location to UF, the Supervisor of Elections office, is an approximately 32-minute walk from campus, one-way. Santa Fe College’s closest is 70 minutes. Buses are options in either case, yet there are still significant portions of walking required from bus stops or significant limitations in busing hours. Persons with disabilities, students with little time between classes, and voters new to and unfamiliar with the town will not find these options useful.

Indeed, her call to action was effective. Nearly 60,000 votes were cast at these locations by students, faculty, and members of the community.

But most people who have driven to a college campus know that finding a parking spot can be tricky. Republicans have used this problem in recent years to disenfranchise college students by imposing strict requirements for parking on campus during early voting and discouraging the idea of having a site on campus entirely.

Now, Republican Secretary of State Laurel Lee’s new directive as a result of Friday’s settlement makes clear that all of Florida’s campuses are allowed to have an early-voting polling place this November — without being required to have enough parking for early voters.

“We are gratified that once again the constitutional rights of our young voters have superseded partisan politics,” Patricia Brigham, president of the League of Women Voters, said in a statement.

The recent settlement came after six years of litigation and efforts to raise public awareness. It was a “victory for democracy,” said Alexandria Harris, executive director of the Andrew Goodman Foundation. The group had another victory in Tennessee just hours earlier when the state legislature repealed a restrictive voter registration law. Friday was a day to celebrate amid a global crisis, Bromberg added.

“We’re so excited about this win,” Bromberg told WhoWhatWhy.

Whether universities in Florida postpone the fall semester due to lingering fears about the coronavirus remains uncertain. But even if that were to happen and students were to remain at home, these early-voting sites would still serve year-round residents in the area who previously had to travel far to vote, Bromberg said.

And, while Newsome is no longer a student, she was gratified that incoming college students will have one fewer obstacle to overcome in order to vote in future elections.

If other students take away anything from her experience, it is to “know your allies, but also don’t burn your bridges,” Newsome said.

“Everyone is a potential ally in this fight, and you need to play that sideline efficiently by just working with who’s already working with you,” Newsome said. “But don’t give up on those who aren’t yet. That’s what awareness and advocacy are for.”