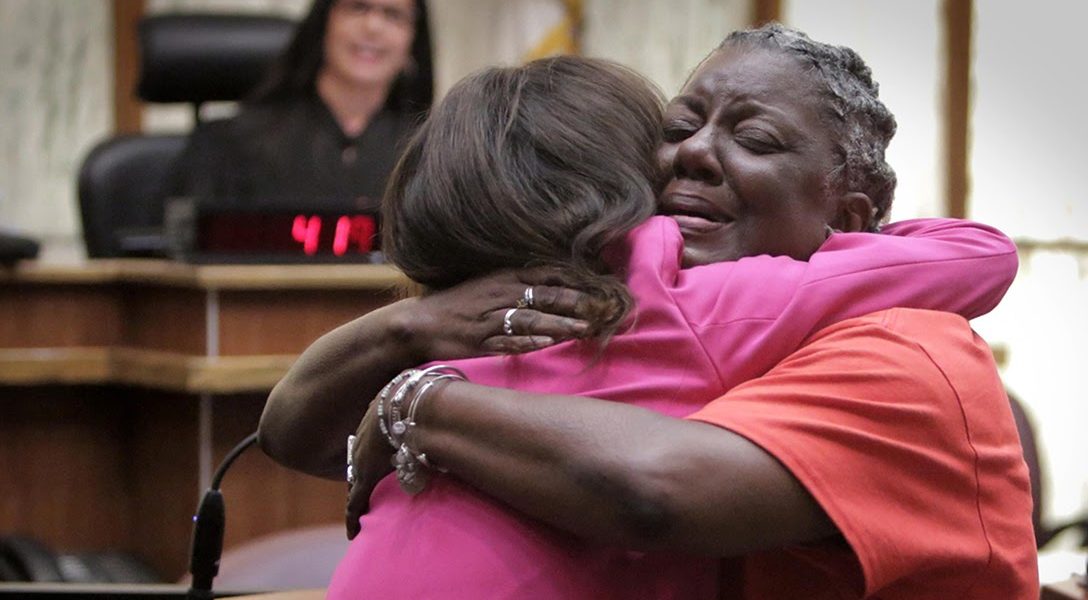 Carmen Brown, right, hugs State Attorney for Miami-Dade County Katherine Fernandez Rundle after getting her right to vote restored in Miami, FL. The 64-year-old Miami woman, with four felonies on her record from decades ago, was the first person called up in a special court hearing Friday, November 8, 2019, aimed at restoring her right to vote under Florida's Amendment 4. Photo credit: © TNS via ZUMA Wire
Elections Government Integrity Rights & Liberties

A federal judge has delivered a landmark ruling for voting rights, arguing that Florida’s “pay-to-vote” system is unconstitutional and officials cannot condition voting rights on an individual’s wealth.

States have the right to limit who can vote and when — but only within reason. In 2018,  Floridians overwhelmingly voted for a constitutional amendment (known as Amendment 4), which restores voting rights to individuals with past felony convictions automatically, upon the completion of their sentence. The ruling came Sunday night from the US District Court for the Northern District of Florida, delivering a major victory for voting-rights advocates.

Florida’s Republican-held state legislature, backed by Gov. Ron DeSantis (R), codified the amendment in early 2019. However, lawmakers included a provision in which individuals who have completed their sentence must also pay any and all outstanding legal fees, fines, or restitution before their rights are restored.

Judge Robert Hinkle ruled that this provision effectively undermined the spirit of Amendment 4. Hinkle’s decision states that the right to vote cannot be conditioned on whether an individual can afford legal financial obligations — which voting-rights groups called a “modern-day poll tax.”

Hinkle’s order allows these individuals to request an advisory opinion regarding their rights when they cannot meet these obligations. Nearly eight in 10 Floridians with a past felony conviction owe more than $500 in legal financial obligations.

“A state may disenfranchise felons and impose conditions on their re-enfranchisement,” Hinkle writes in his 125-page ruling, “but the conditions must pass constitutional scrutiny.”

Officials had a system in place for eight years prior to Amendment 4’s passage, but that left re-enfranchisement up to a clemency board’s discretion. Hinkle argues that this system was so flawed that “the Executive Clemency Board was an illusory remedy.”

The lawsuit — led by the Campaign Legal Center, the ACLU, the NAACP, and New York University’s Brennan Center for Justice — was a first-of-its-kind class action lawsuit, which means that whatever the court ruled for the plaintiffs in this case applies to every formerly convicted felon in Florida.

Daniel Tilley, legal director for the ACLU of Florida, said that Hinkle’s ruling was “a powerful reminder that no one can trump the US Constitution.”

“The Constitution is clear — you cannot make voting contingent on wealth,” Tilley said. “It should alarm Floridians that there are people occupying the highest echelons of political power in our state who fought to keep Florida tied to its racist past and bar people from voting.”

African Americans disproportionately make up the number of formerly convicted felons in Florida. Hinkle argued that “the voters’ effort was to restore the vote to African American felons, as well as all other felons, not to withhold it.”

Leah C. Aden, deputy director of litigation at the NAACP Legal Defense and Educational Fund, praised the ruling as a “monumental win for our democracy.”

“The court recognized that returning citizens should not have to pay to vote if they are unable to do so — and that certain legal financial obligations function today like the unconstitutional poll taxes that states erected to lock black people out of the political system decades ago,” Aden said.

Florida’s elections department has a backlog of roughly 85,000 voting rights restoration cases, and the department can handle only 57 cases per day, according to the lawsuit. This ruling now provides an avenue for these cases to be fast-tracked before the November election and applies to more than 750,000 eligible voters with past felony convictions.

“This is a watershed moment in election law,” said Paul Smith, vice president of the Campaign Legal Center.

The clock is ticking for officials to decide whether to appeal the ruling, as the deadline to register to vote in Florida’s primary elections is July 20, and the elections themselves are on August 18. In the likelihood that officials appeal the ruling, Tilley added, “we are ready to take this fight all the way to the US Supreme Court.”