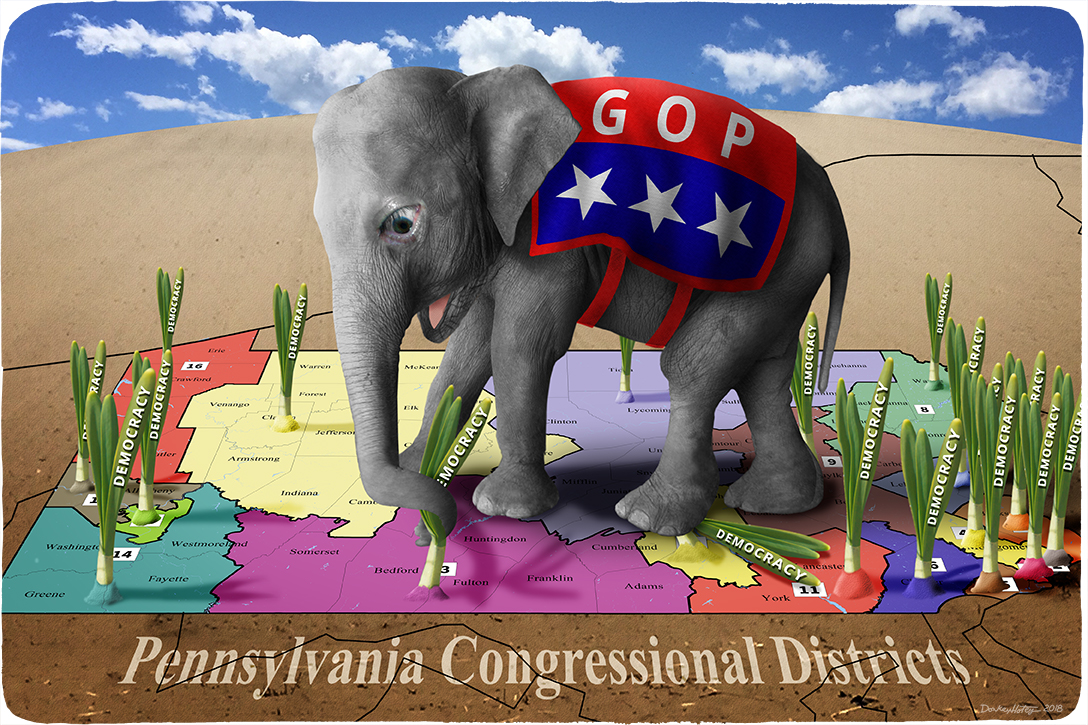 A Win for Democracy in Pennsylvania

Not all heroes wear capes. Among the ones who don’t is Nathaniel Persily, a man few Americans have ever heard of. By day, he teaches at Stanford Law School. At night, he is saving the battered US democracy.

Persily is a court-appointed expert who has been tasked with redrawing gerrymandered maps — most recently in Pennsylvania. The Keystone State is a perfect example of why Persily’s expertise is desperately needed.

After Republicans won both chambers of the state legislature and the governor’s mansion in 2010, they immediately began to cement their new majorities.

In 2011, they revealed a new congressional map that is widely viewed as one of the most gerrymandered in the US. It doesn’t take an expert like Persily to see why. It featured oddly shaped congressional districts, some with narrow corridors and jagged boundaries that split many different counties.

What the Republicans had done is to “pack” minority populations into a small number of districts, like those representing Philadelphia and Pittsburgh, that would vote for a Democrat by an overwhelming majority while giving their own candidates an advantage in all of the state’s other districts. As a result, they achieved a lopsided victory, despite the popular vote being evenly split between the two parties.

Because the wheels of justice turn slowly, it took more than five years for Pennsylvania’s Supreme Court to declare the map unconstitutional. The court gave state Republicans one more chance to draw a fair map, specifying features it should entail.

“To comply with this order, any Congressional districting plan shall consist of: congressional districts composed of compact and contiguous territory; as nearly equal in population as practicable; and which do not divide any county, city, incorporated town, borough, township, or ward, except where necessary to ensure equality of population,” the court ruled.

As a result, Persily was assigned to create a map that would more fairly represent Pennsylvanians in Congress. He did, and complied with the court’s wishes on how such a map should be drawn.

Persily uses census data and mapping software, and in this case the court’s direction, to come up with a fairer map. Describing his work, he said that the challenge is “trying to balance the myriad factors required by the law, politics, demography, and geography for a jurisdiction.”

In the case of Pennsylvania’s new map, the media calls it a win for Democrats, who will likely send more than five representatives to Congress after the midterm election. It might even swing the pendulum a bit too much in their favor. But it is certainly not blatantly partisan — and seeing this result in purely partisan terms is to miss the point.

It’s a win for democracy.

Of course, it is possible that one party wins the popular vote in a tightly contested state but ends up not getting more delegates. However, when winning 50.3% of the popular vote nets a party less than 30% of a state’s congressional seats, that’s prima facie a case of electoral fraud.

In Pennsylvania, Republicans are fighting fiercely to protect their ill-gotten gains. They refused to comply with the decision, unsuccessfully appealed to the Supreme Court, challenged it again in federal court, and even floated the idea of impeaching the judges who handed down the decision. In other words, now that somebody finally put an end to an injustice perpetrated against Pennsylvania’s voters, they seem willing to go to extreme lengths to prevent that from happening.

While this case and other recent ones, for example in North Carolina, involved Republicans clinging to power, this is a bipartisan problem. Meaning neither party is likely to fix it.

The Supreme Court will get a chance to rectify this problem later this year, when it rules on whether Wisconsin’s politically gerrymandered map is unconstitutional. However, the court has sadly been on the wrong side of democracy in recent landmark cases, such as Citizens United, which opened the spigots for more money in politics, and Shelby County v. Holder, which gutted the Voting Rights Act.

If the court fails to stop political gerrymanders, one can hope that American voters will take the matter into their own hands. Whether through popular referendums or electing representatives committed to change, the way to ensure fair election results is to empower people like Persily to draw maps that fairly represent the voting public.