When Barack Obama won North Carolina in 2008, he not only became the first Democratic presidential candidate in 30 years to do so, but his victory also showed Republicans that shifting demographics could weaken their stranglehold on power in the Tar Heel State.

As a result, over the last decade, they turned North Carolina into one of the nation’s least democratic states. It’s no exaggeration to say that North Carolina Republicans have been on a crusade to suppress minority votes; most recently, they used their majorities in the state legislature to curb the powers of incoming Democratic Gov. Roy Cooper.

However, the foundation for their blatant power grab was laid much earlier. For 25 years, North Carolina Republicans have tried to manipulate district maps to give themselves an advantage in state and national elections.

Even when they were rejected by the courts, they would go back to the drawing board and find new ways to minimize the impact that black voters have on Tar Heel State elections.

Now they are at it again.

As of this month, 35 out of the 50 state Senate seats are held by the GOP, and Republicans occupy 74 out of North Carolina’s 120 House seats. This gives them the supermajority needed in both chambers to override gubernatorial vetoes. Furthermore, 12 out of the 15 United States congressional delegates from North Carolina — the two senators and 10 of 13 members of the House of Representatives — are Republicans.

This does not reflect the distribution of voters in a “purple” state. Forty percent of North Carolina’s registered voters are Democrats, 31 percent are Republicans, and 29 percent are independent/swing voters. In addition, statewide elections are very close, as Cooper’s election last November showed.

Gerrymandering is largely responsible for the manipulated Republican advantage. However, as WhoWhatWhy has reported, the Republican-led General Assembly also undermines North Carolina’s democracy through voter suppression and the usurpation of Democratic Governor Cooper’s power.

In June, the Supreme Court upheld a district court’s decision, ruling 28 legislative districts unconstitutional racial gerrymanders, in violation of the Equal Protection Clause of the Fourteenth Amendment. In an attempt to rectify this, the Republican-led General Assembly has been ordered to redraw the maps.

Nonetheless, election integrity activists say the proposed maps that were released just one week prior to the September 1 deadline do not fix preexisting problems, and even create new legal questions.

“Unfortunately, it does not appear that they took court or public recommendations when redrawing,” Jane Pinsky, a representative for the North Carolina Coalition for Lobbying and Government Reform, told WhoWhatWhy.

“What they’ve released is kind of a sham,” Bob Hall told WhoWhatWhy in reference to the proposed maps and the process that North Carolina relies on: tasking the same self-interested legislature to redraw the maps expecting a different result. Hall is the executive director of Democracy North Carolina — a voting rights organization. “[The legislature] didn’t give the public the maps or data until very late,” he said, “and [they] didn’t give us the registration data by race.”

The analysis of the proposed maps appears to show that the packing of African-American voters into fewer districts still continues, and that many districts are more right-leaning and less competitive than the 2011 maps.

Districts not among those that were ruled unconstitutional, such as House districts 36, 40, and 105, were illegally and unnecessarily redrawn in mid-decade to “increase the Republican advantage in upcoming elections,” Hall said. “Over 90% of districts are not competitive, based on data you [Senate Committee on Redistricting] provided.”

Hall was among the many North Carolina voters who spoke up at an August 22 public committee hearing. Lawmakers received overwhelmingly negative feedback, with most speakers calling for the committee to change the maps before submitting them to the court.

Several constitutional flaws were identified at the public hearing, and activists criticized a process that seems designed to prevent other stakeholders from providing meaningful input. Members of the public only received access to the maps 48 hours prior to the hearing. 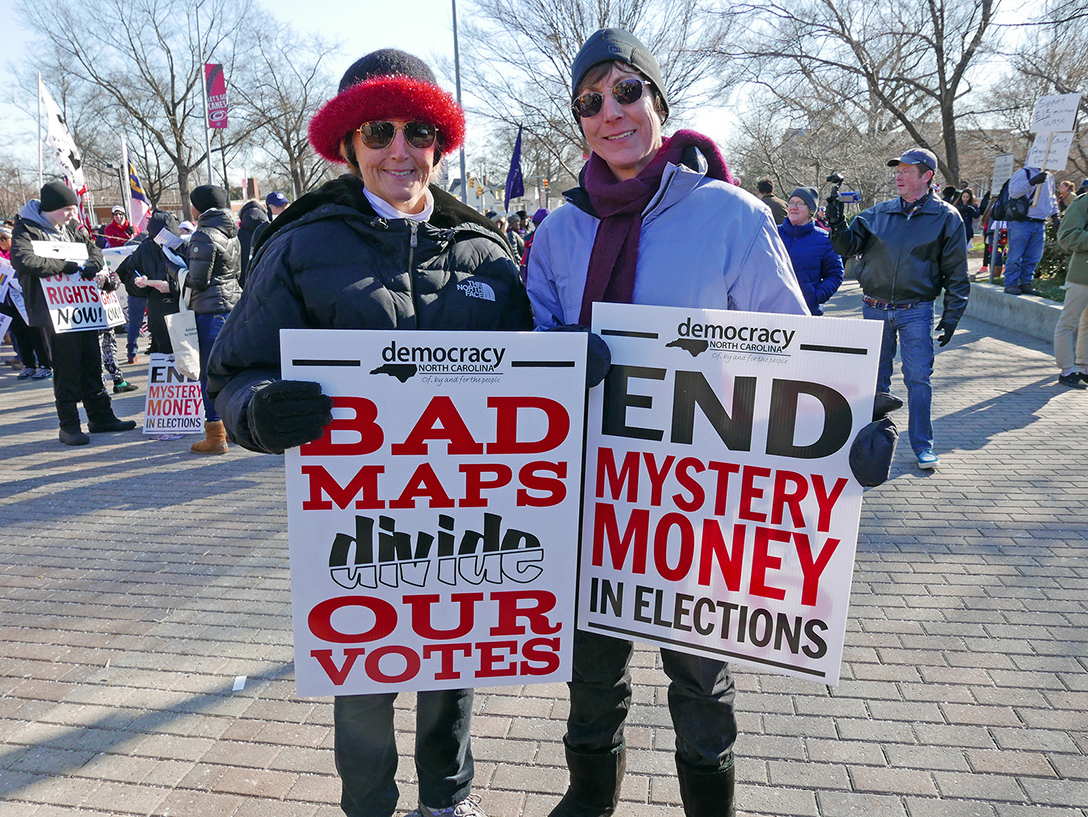 “They’ve known since August of 2016 – they could have released them sooner,” Hall said. “They haven’t allowed for any meaningful dialogue from the public. The bottom line is that the new maps are partisan gerrymandering in the extreme.”

Voting rights activists and North Carolina voters alike have voiced their opinions that lawmakers made little effort to provide fair legislative voting districts that rely neither on race nor party affiliation.

“Until we confront this systemic problem, we’re just going to be doing this over and over and over again,” Pinsky said.“The US Supreme Court quite clearly portrayed in Covington that they’d had enough of dealing with redistricting from North Carolina and that we needed to find a different way to stop the contention.”

“A huge matter at play is the conflict of individual interest versus collective interest,” Dr. Aaron King, political science professor at the University of North Carolina Wilmington, told WhoWhatWhy. “In theory the maps should reflect the collective interest but inherently, a politician’s ultimate goal is to win and have their party in power.”

The House and the Senate approved their own respective redistricting maps on Monday, August 28th. On Tuesday, August 29th, both chambers approved the other chamber’s maps as well. The Senate and House maps were presented to the judge panel on Friday, September 1, just in time to meet the court-ordered deadline.

“I suspect that the court will make a public decision in mid-to-late September,” Bob Phillips, executive director of Common Cause North Carolina, told WhoWhatWhy.

The process of gerrymandering, and the resulting uncompetitive districts, “in and of itself undermines democracy; what good does it do to cast a ballot in which there is only one candidate to choose from?” Pinsky said. “It doesn’t make voters very happy about the system and it discourages people from caring about what’s happening in an election.”

“I’m not sure this battle is over on this round of maps, but it’s up to citizens to push their leaders — things don’t happen without all of us participating.”