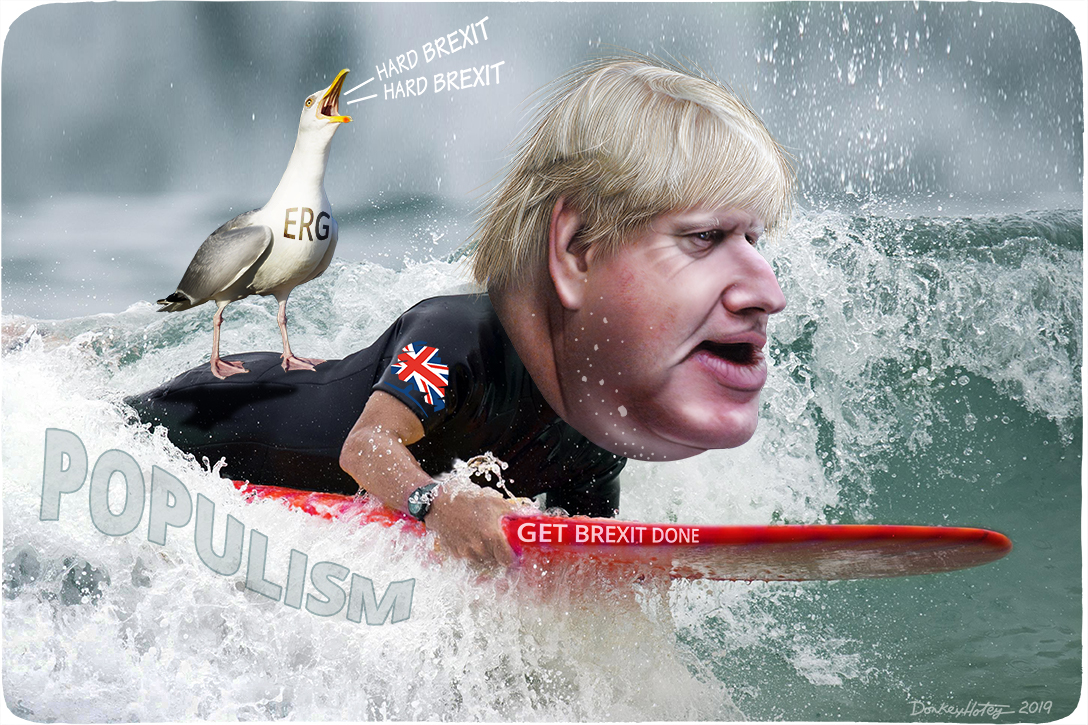 Across Europe, the populist wave that threatened to sweep away the politics of consensus may be  ebbing. In Hungary, Poland, Austria, and Switzerland, national and regional elections have dented support for the dominant populist parties. In Italy, the high-profile, Eurosceptic immigrant-baiter Matteo Salvini has been booted out of government; in Israel the right-wing nationalist Benjamin Netanyahu has finally had to relinquish his 14-year grip on power.

Even Donald Trump, the godfather of right-wing populism 2.0, is on the back foot confronting an impeachment threat and growing disgust over his betrayal of the Kurds in Syria. Recent polls  suggest his second-term ambitions are in jeopardy.

But is the UK set to defy this trend? Boris Johnson, the recently minted Conservative Prime Minister, has already shown a willingness to channel nationalistic narratives and has dabbled in inflaming the culture wars.

Johnson is a charismatic yet incredibly entitled product of England’s elite public schools, who knows a bit about oratory. But is he a populist set to lead the UK on an unprecedented right-wing path, away from consensus, moderation, and the good old-fashioned sense of British fair play?

The thing about Johnson is that his political lodestar is narcissism. A craving for power and a glorious place in history are in his DNA. For example, in the days before the referendum to leave the European Union, he penned two columns for the Daily Telegraph, one arguing the case for remaining in the EU, the other for Brexit. After weighing which would serve his ambition best, he chose the latter for publication — and became the leading light in the successful Brexit campaign. He then undermined Prime Minister Theresa May’s attempts to square the circle of leaving the world’s most powerful trading bloc without damaging the economy, and eventually usurped her.

Now in the top job, he is calling for a general election to break the parliamentary deadlock and end the nightmarish Groundhog Day that Brexit has become. His current minority Conservative government is not fit for this purpose, and he needs a majority to release the seized-up gears of British politics and set about establishing what Johnson-ism might be, beyond Brexit.

But what are his politics? So far, he has been an adept shape-shifter. As the two-term Mayor of London (2008–2016), he did a good impression of a socially liberal metropolitan. He was pro-Europe and embraced diversity. But Brexit changed everything, and, as a man with his eyes on the prize, he has ridden the populist wave, peddling simplistic slogans, stoking the fires of English nationalism and dog-whistling to anti-Muslim sentiments.

He has also established very friendly relations with President Trump and staked a lot of political capital on the “very substantial” free trade deal that the UK will do with the US after it exits the European single market. Critics warn that it will mean slashing UK food standards (and the arrival on these shores of the dreaded chlorinated chicken) by stripping out protections imposed by parliament earlier this year.

But there’s more. As Johnson crossed the threshold of Number 10 Downing Street, the prime ministerial home, a whiff of political sulphur followed in his bulky wake — it was the populist puppet master Steve Bannon, former Trump strategist and chief of staff, with whom he had several meetings.

Johnson’s power-base in the Conservative Party consists of  the Brexit ideologues — known as “the Spartans” — who despise the European “elite.” They dream of a UK freed from (socialistic) regulation, and they believe in the neoliberal credo of free enterprise in all its ruthlessness. For this wing of the Conservative Party, Brexit — “the will of the people” — is the flying wedge of retro English nationalism that is irredeemably suspicious of foreigners.

According to the polls, Johnson has an excellent chance of winning big at the next general election. His opponent, Jeremy Corbyn, the leader of the Labour Party, is the most unpopular leader of the opposition since records began. His political biography as a fellow traveler on the fringes of the far left, the powerful accusation that he is an enabler of anti-Semitism masquerading as anti-Zionism, and the Labour Party’s muddled position on Brexit all suggest he is there for the taking.

Having ridden to victory thanks to a Mephistophelian bargain with the hard right of British politics, Johnson, who has penned a cheerleader biography of Winston Churchill, could embrace populism and its push-pull dynamic. It will be his “chance to re-order our economy and society” and help write his own, triumphant chapter of British history.

If he wins the imminent general election leading a Conservative Party that has already begun driving out moderates in a sharp pivot to the right, he could be poised to become Britain’s first populist prime minister.