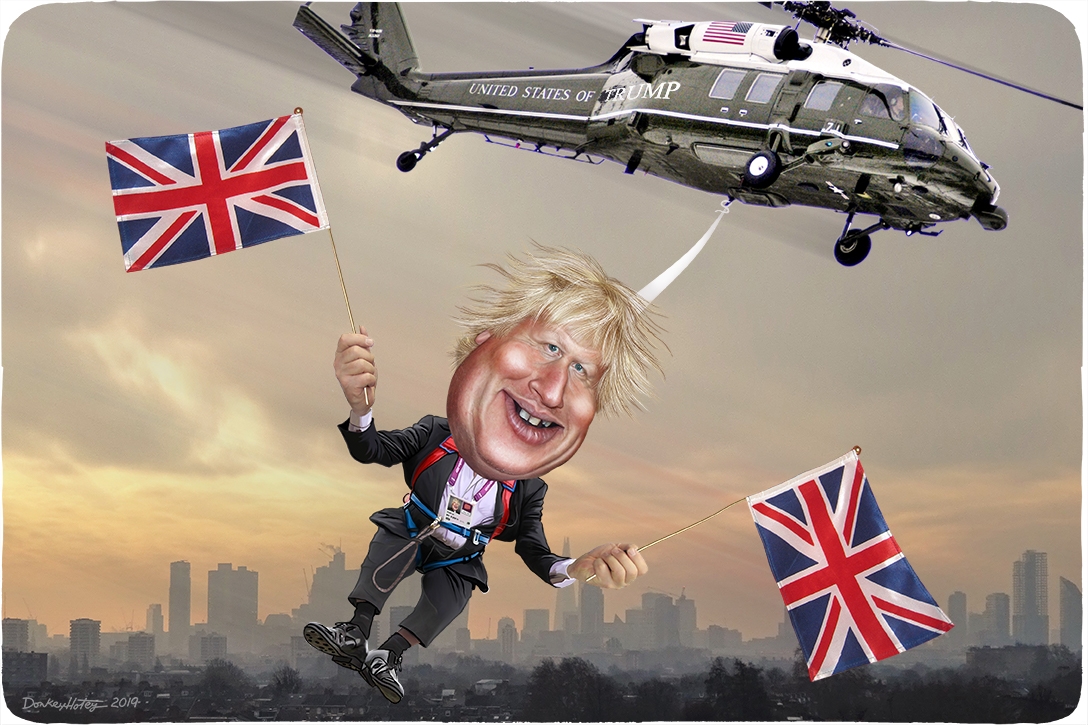 The UK is going through a “political nervous breakdown” over Brexit, the tortuous process of Britain leaving the European Union, declared Britain’s former chief of foreign intelligence Sir John Sawers this month. This week, Boris Johnson became the new prime minister and in a parallel realm Nurse Ratched sent for the strait-jacket.

“What universe are we living in where Boris Johnson is the Prime Minister?” tweeted a Twitter wag at the news. Many Americans, no doubt, share the same disbelief about President Donald Trump.

But the connection between the two men doesn’t end there. Indeed, Johnson, who became the leader of the Conservative Party and replaced outgoing PM Theresa May on Wednesday, has been touted as Britain’s Trump. Trump loves the idea. “They call him ‘Britain Trump’ and people are saying that’s a good thing. They like me over there. That’s what they wanted. That’s what they need,” the president told the conservative youth organization Turning Point USA. (Quick fact check: 67 percent of Britons have a negative opinion of Trump.)

Derided as a showman and a charlatan by his opponents, Johnson has spent his entire career  — which began as a reporter on the Times, from which he was sacked for fabricating a quote attributed to his own godfather — falling upwards.

Guardian columnist Gary Younge put it succinctly: “The rise of Boris Johnson was only really ever improbable if you were under the delusion that we live in a meritocracy. We don’t. This is the class system in action — propelling confident, incompetent, posh white men to the top regardless of their abilities, record or character. That is the system that produced and sustained him, and that is the system in whose interests he will govern.” So far, so Trump-ish.

Indeed, the two blondes — Johnson sporting a hairbrush-free haystack effect to Trump’s extreme comb-over — have been nurturing a bromance for a couple of years now. Johnson, who was gifted the position of foreign secretary by the last government, quickly ingratiated himself with Trump. Johnson resigned in July 2018 to oppose May’s negotiated Brexit strategy after a tenure in which, at times, he reached peak buffoon with a series of tasteless gaffes. For example, he opined that the Libyan city of Sirte could become an economic success like Dubai: “All they have to do is clear the dead bodies away.”

Earlier this month he showed no loyalty to his former Foreign Office colleagues when the British ambassador to Washington, Kim Darroch, was abused and insulted in a vicious Trump Twitter storm following leaked diplomatic communiques in which he had described Trump as “inept” and “dysfunctional.” Johnson — then the presumptive prime minister — remained cravenly silent. The ambassador resigned and Johnson was condemned for “throwing him under the bus.”

But there’s more. As Johnson crossed the threshold of Number 10 Downing Street, the prime ministerial home, a whiff of political sulphur followed in his bulky wake — it was Steve Bannon, former Trump strategist and chief of staff.

Johnson has been accused of being an apprentice of the alt-right master. In a new documentary, titled The Brink, Bannon talks about his relationship and contacts with Johnson, and how he helped him craft his first speech after his resignation as foreign secretary, in which Johnson savaged May’s Brexit strategy. The first clip shows Bannon reading a front-page story in the Daily Telegraph about Johnson’s resignation speech with the headline “Let’s Make Britain Great Again.” Johnson angrily denied any collusion between the two.

The clips also raise further questions about Bannon’s role in the EU referendum [in 2016]. Bannon, a former vice president at the data firm Cambridge Analytica, had launched a British version of the right-wing news site Breitbart to support Ukip and [Nigel] Farage, and had been its executive chairman during the referendum. Breitbart has been funded by Robert Mercer, the American hedge-fund billionaire, who partly owned Cambridge Analytica, and was also the single biggest donor to Donald Trump’s campaign.

Johnson has vowed to resolve the Brexit deadlock even if it means the UK crashes out of European Union membership with no deal on October 31 (aka Halloween). If this horror story happens and the UK leaves the EU with no trade deal in place with the world’s biggest single marketplace, economic mayhem will be unleashed. But the Brexiteers believe that a quick, mutually beneficial deal with the United States will offset the calamity of being shut out of the European free marketplace. In Trump we trust, they cry.

But the fear is any deal will be all trick and no treat when faced with Trump’s predator instincts and his vow to always put America first. It is predicted that goals of Trump’s negotiating team will include opening up the UK’s beloved National Health Service to competition from US private health insurers; and that Johnson, for all his blonde ambition and doublespeak about restoring British pride post-Brexit, will have to get down on bended knee — and the humiliation of the UK will be complete.