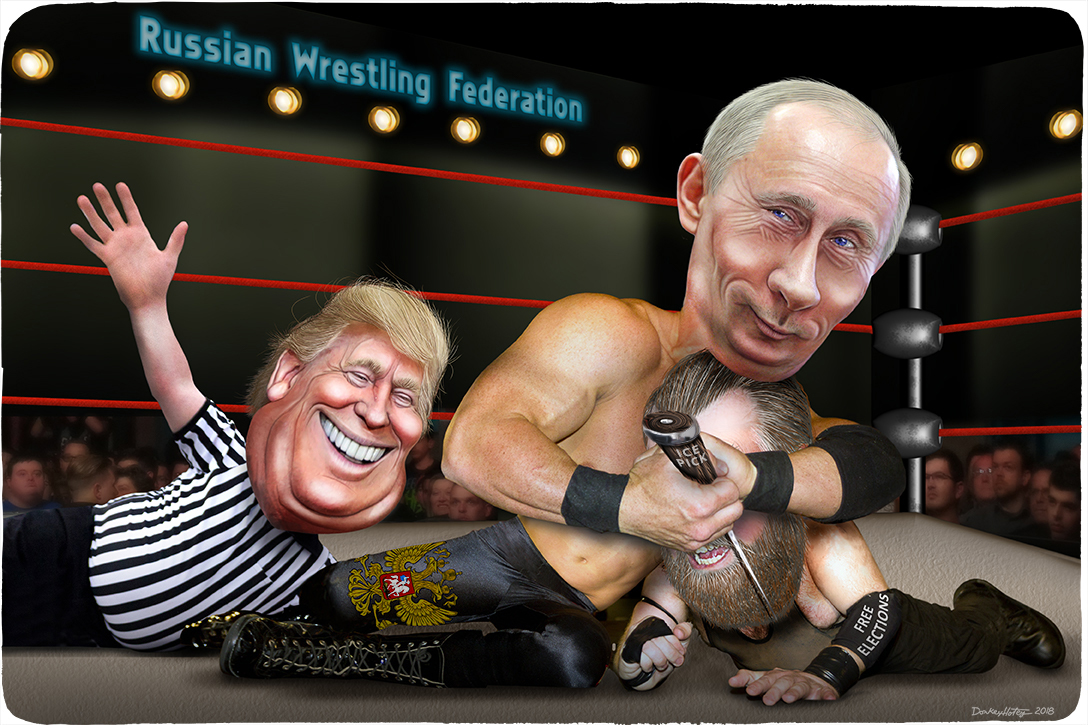 Paying Russia Back for Election Interference Is an Exercise in Futility

It’s been a tough stretch for people who like democracy. Not only is the right to vote in the United States under continuous assault from within, but the regime of Vladimir Putin also successfully interfered in both the 2016 US presidential election and the Brexit vote in the UK, in an effort to undermine the West.

Now that Putin is up for “re-election” in March, wouldn’t it be nice to exact some measure of revenge? At the very least, the countries that Russia has targeted could give him something to think about domestically, so that he cannot focus so much of his attention on meddling elsewhere.

There are just a couple of problems with seeking payback.

First, President Donald Trump, after getting an assist from Putin in the US election (which is the most charitable way of putting it), surely has zero interest in pursuing any such plans. That would make things tricky because, among Russia’s targets, the US has the most experience in messing with elections abroad. In fact, it might be easier to list the countries that have held elections without American interference than with it, as people all across the Americas, in Iran, Afghanistan, the Russians themselves, etc. can attest to.

So that leaves the Europeans, who have lately had little stomach for such things. But let’s say that some sub rosa agency of the European Union decided to pursue a low-risk strategy of only copying the legal parts of Putin’s anti-democracy playbook, such as social-media buys, troll accounts, and the distribution of fake news.

What could such an initiative accomplish? Virtually nothing.

Because trying to interfere in an election in Putin’s Russia would be like fixing the outcome of WrestleMania or a Harlem Globetrotters game. There is no point because we already know what’s going to happen.

On paper, Russia is a democracy. In reality, it’s a mix of a murderous Czarist regime, an oligarchy, and a kleptocracy. In other words, it’s about as democratic as North Carolina (minus the murder of opposition leaders and journalists).

Case in point: In an attempt to show how open the upcoming election would be, Russia’s news agency TASS reported this week that international observers would be allowed to monitor it — including representatives of the Organization for Security and Co-operation in Europe (OSCE) and FIS, a group of former Soviet states.

Russia “persistently meets electoral commitments within participation in CIS, the Council of Europe and OSCE, providing accessibility for international monitoring to the electoral process in general elections,” said Nikolai Levichev, a member of Russia’s Central Election Commission. He added that this is “a reliable international guarantee that Russia’s democratic elections are open and fair.”

The OSCE, however, sees things a bit differently.

“Although all contestants were able to campaign unhindered, the conditions for the campaign were found to be skewed in favor of one candidate,” the organization declared in its final report on the previous Russian presidential election in 2012. “While all candidates had access to media, one candidate, the then Prime Minister, was given clear advantage in the coverage. State resources were also mobilized in his support.”

That prime minister, of course, was Putin and — to put it in American terms — what this means is that the pre-election coverage in Russia was as fair and balanced as your average Fox & Friends broadcast.

Furthermore, OSCE noted that the process on election day “deteriorated during the count due to procedural irregularities.” If that sounds ominous that’s because it is.

While the outcome of the 2018 election is a mere formality, Putin is apparently taking no chances. On Christmas Day, he had Alexei Navalny, the leading opposition candidate, banned from participating in the March vote.

So much for Putin’s idea of “open and fair.” The only real question is what the Russian president will cook up for us in his next six years in power.