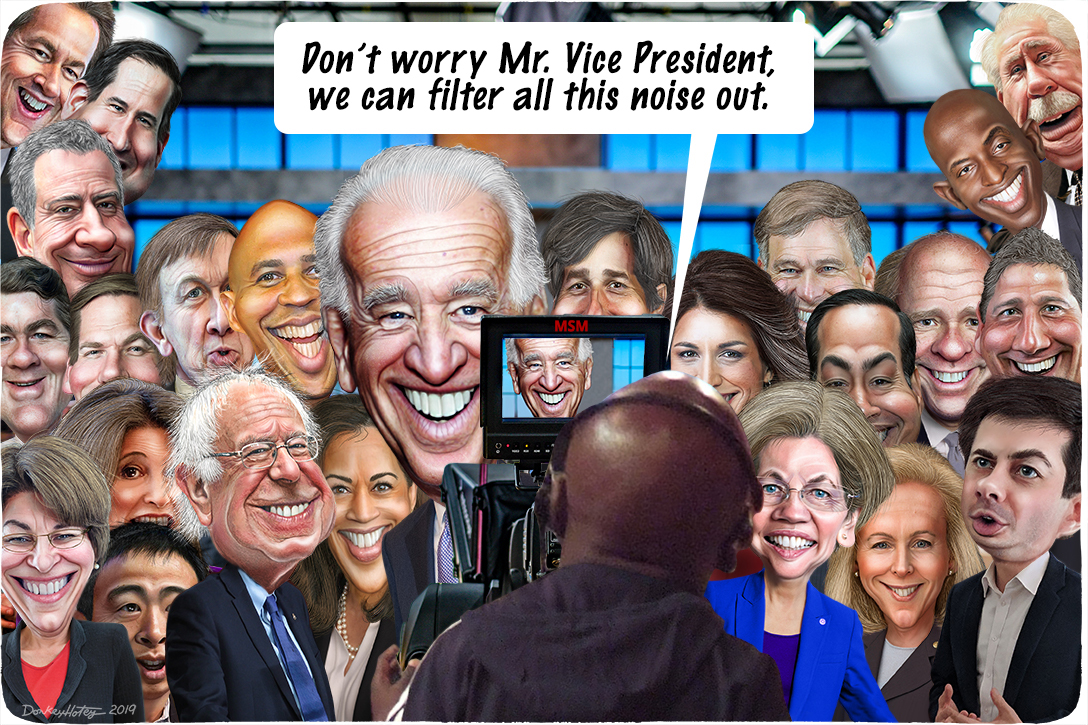 It seems as though the media has not learned a single lesson from 2016, because it is on track to screw up another presidential election.

Back then, corporate news outlets, driven by a desire to maximize revenue, basically picked both candidates in the primary, and then allowed themselves to become pawns in the scheme of a foreign power to get Donald Trump elected.

Most importantly, at this crucial junction when Americans are supposed to learn about the different candidates and their platforms, the media is already picking winners and losers — therefore denying voters that opportunity. A whopping 24 Democrats are vying for the chance to take on Trump next year, but most supporters of the party would be hard-pressed to name even half of them.

The media calls this a lack of name recognition, but how are candidates supposed to show up on the radar screens of voters if the country’s big news outlets refuse to cover them? Months before a single vote is cast in a primary, the media has already decided who has a chance to compete for the nomination.

The two best examples of this are former vice president Joe Biden and Pete Buttigieg, the mayor of South Bend, Indiana. Biden, the ultimate establishment candidate, is viewed by the talking heads as the candidate with the best chance of defeating Trump. There really isn’t a lot of evidence for that. Right now, it looks as though the Democrats could just pick a person off the streets and have a decent chance of winning.

Buttigieg’s case is more interesting. He is the candidate the media fell in love with, which paid off big time for him. It is obvious that many journalists not only like the personal story of a veteran who happens to be gay and was elected mayor in a red state, but that they also think that a matchup with Trump would be great for ratings.

They like the idea of a contrast between the old, ignorant, and boorish president going up against the young, educated, and sophisticated upstart. Trump dodged the draft; Buttigieg volunteered for military service. The president pretends to be religious; his challenger openly and intelligently talks about his faith.

Just as valuable as the contributions Buttigieg is raking in as a result of the attention that reporters have bestowed upon him is the exposure resulting from this “earned media.” It allowed him to move up in the ranks from an also-ran to somebody who is now viewed as a serious contender. This isn’t to say that he does not deserve a serious look, but if he does, then so do many of the other candidates. Instead, the media is playing favorites again.

If the impact of “earned media” sounds implausible, just look at Trump. During the 2016 GOP primary, every word of his was covered. First, because he was so outrageous and then because he provided great ratings. People either loved Trump or they loved to hate him. But they all followed his every move. Half of the voters thought he would make America great again and the other half wanted to watch him fail.

And while Trump may not know much, he is very savvy when it comes to self-promotion and understanding how the media works. After all, he had already conned them into propagating the narrative that he was a successful, self-made billionaire.

In the end, all of the attention he got on the campaign trail equaled billions of dollars in “earned media.”

In effect, the powers that run corporate media — obsessed with ratings and clicks — helped Trump win the primary and then the general election.

And they still haven’t learned their lesson, because every (mis)step, tweet, and insane rally of the president are covered as though they are really important — yet they still don’t do enough to call him out for outright lies. At this point, everybody knows who Trump is. We don’t need daily proof, so journalists should focus on the things that actually matter — the administration’s policies and what impact they have on the country and the world.

And here is a unique concept for journalists: Maybe stop giving the guy who calls you “enemy of the people” unlimited airtime, and stop covering his incoherent, hate-filled rallies.

But that’s not the only media fail.

The hunt for advertising dollars has also caused corporate news outlets to focus on fluff instead of substance. Their readers are confronted with a barrage of stories on tweets or completely meaningless polls. What doesn’t reach potential voters is reliable information on what candidates stand for, what their ambitions are, in which direction they want to take the country, and how they want to do that. The example of Sen. Elizabeth Warren (D-MA), who is rising in the polls precisely because she is coming up with specific plans, shows that there is at least some appetite for detailed policies.

The New York Times kinda tried to talk to candidates about the issues, but it also asked them about their comfort food and, in the end, it amounted to a collection of sound bites.

A true service to the voters would be a compilation of all of the candidates’ plans to deal with the major issues of the day, but we aren’t holding our breath.

Instead, they will waste resources on a primary poll from a state where voters won’t get to cast a ballot for nearly another year.

To be completely fair, there is the issue of supply and demand. These corporate outlets would write more about policy platforms if readers demanded such coverage. Instead, most of them prefer easily digestible, lighter fare.

However, journalism — whose freedom is explicitly protected by the First Amendment — should not just be a business. Those working for the corporate media should always remember that they are not just there to maximize profits. If they don’t learn that lesson — quickly — then the media will once again influence the outcome of the election instead of covering it.