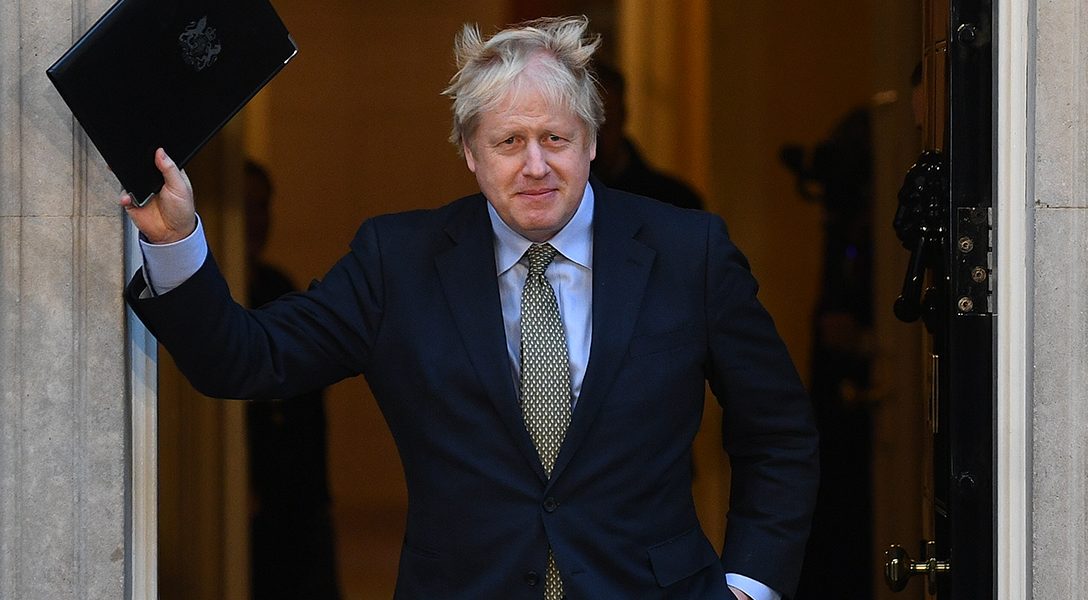 Prime Minister Boris Johnson waves on the doorstep of number 10 today after making a statement in Downing Street in London, UK following the Conservative Party's return to power in the General Election with an increased majority. Photo credit: © Victoria Jones/PA Wire via ZUMA Press
Opinion

LONDON – At the start of 2019, the UK’s ruling Conservative Party was self-immolating. On Thursday night, its leader, the “blond bombshell” Boris Johnson, rose phoenix-like from the fires of Brexit to win a landslide victory in the general election.

Why the opposition Labour Party was dealt its most humiliating defeat in 80 years is the vital counterpoint to this historic moment for the United Kingdom. The political log-jam over the Brexit dream and how the narrowly-won 2016 referendum to leave the European Union could be converted into a national destiny was the lodestar of the election, and Johnson’s mantra of “Get Brexit Done” cut through — most tellingly in the heartlands of England’s northern rust belt.

The so-called “red wall” of traditional working class constituencies crumbled and generations of tribal loyalty to the Labour Party was abandoned.

In an echo of the Trump effect, the election results highlighted the schism between the globally curious, ethnically diverse and metropolitan left, and the white, poorer regions that resented the competition for jobs and services from the eastern European EU citizens who flocked to the UK in the last decade.

But there was an even more unprecedented element to the election than the Labour catastrophe: the emergence of anti-Semitism as a political issue. Never before on the UK election radar, it became an important sub-plot in the story, a furious rallying point on social media, and an issue on the doorsteps as party canvassers sought to mobilize their supporters.

The lightning rod for this unique and, to many, shocking moment in British political history was the Labour leader, Jeremy Corbyn.

Jeremy Corbyn campaign photo. Corbyn holding confidential report by Boris Johnson’s own government that exposes the falsehoods about Brexit that Johsnon has been peddling, on the issue of Northern Ireland in particular. Photo credit: Jeremy Corbyn / Flickr (CC BY 2.0)

The veteran peace campaigner and the most left-wing leader of the party since 1945 was catapulted into the top job as the antidote to the ideologically agnostic Tony Blair, who had won three general elections but also relished being a sidekick to George W. Bush and collaborator in the deceit- and blood-soaked debacle that was the Iraq War.

Suddenly, the angry anti-Zionism of campus debates and fringe politics had a champion in the waiting-room of British power. Corbyn’s defenders claimed he is “anti-Israel, not anti-Semitic.” Indeed, there is no record of him ever uttering a crass anti-Jewish word, unlike his nemesis.

A long-forgotten novel, 72 Virgins, penned by Boris Johnson was dug up during the election campaign. It included a caricature straight out of the Mein Kampf school of literature. The future prime minister imagined up a Jewish character who was a “middle aged man, with a proud nose and curly hair” whose business “relied on immigrant labor,” had “eyes like an unblinking snake,” cruised red light areas “in search, as he put it, of a ‘bit of black,’” and sent his son “pathetic presents, every five years, of low-denomination bills.”

But for Boris, as for Trump, there are sins that will be forgiven because of their staunch support for Benjamin Netanyahu’s Israel; there’s no such hiding place for Corbyn. On his lifetime political journey he has fellow-traveled with anti-Zionist zealots, some of whom have made Jew-baiting an intrinsic part of their demonization of Israel.

Indeed, the Labour Party, which has anti-racism as one of its core values, is now the subject of an inquiry by the Equality and Human Rights Commission into whether it is institutionally racist — the only other party to face such ignominy was the fascistic British National Party.

A recently leaked submission to the inquiry revealed comments from Labour Party–linked social media pages riddled with Nazi-grade anti-Semitism. Indeed, when the history of the 2019 general election is written, a defining moment will be Corbyn’s BBC TV interview when he pointedly refused to apologize for the anti-Semitism scandal that has enveloped the party.

Anglo-Jewry has been freaked out. Many in the community of 300,000 (0.5 percent of the British population) thought they could hear the echoes of their painful history, and some claimed they had a packed suitcase under their beds in anticipation of the unthinkable Prime Minister Corbyn.

By election eve, fearful Jewish Twitter was verging on deranged, comparing the vote to Germany’s elections of 1932 and jabbing an accusatory digital finger at anyone daring to declare support for the Labour Party and its “for the many not the few” social, housing and welfare program.

What next? With Boris “some of my best friends are Jewish” Johnson now in power for the duration, perhaps the circus will move on. The UK’s well-integrated, affluent Jewish community will hope to retire into the background once again. But the Brexit championed by Johnson has opened the Pandora’s box of nationalism and muscular patriotism, energizing xenophobia.

Meanwhile, far-right groups (armed with Islamophobia and conspiracy theories about the Rothschilds and George Soros) are looking to exploit the window of opportunity. For the opposition, Corbyn may be finished — but the so-called ‘Corbynistas’ will remain entrenched in the Labour Party.

Eighty-six years after Hitler’s rise to power the Jewish question now features again in the political conversation in Europe and the US. The Israel-Palestine conflict has given it a new, dangerous spin and social media an unimagined turbocharge. New dimensions have opened up as extremist Muslim immigrants import their own strain of anti-Semitism, and bizarre sects — such as the Black Hebrew Israelites, whose followers attacked the kosher deli in Jersey City — take their cue from this febrile ether.

Elements on the left denounce any Jew who refuses to denounce Israel as “paid agents of apartheid” and young political stars such as Rep. Ilhan Omar (D-MN) flirt with anti-Semitic tropes as the right seeks to weaponize the perceived slurs for its own ends.

Of course, Trump has his own Jew-specific, divide-and-rule Madman theory. In the last week alone he gave a speech to the Israeli-American Council that Vanity Fair described as going “full anti-Semite in a room full of Jewish people,” hosted a Chanukah party at the White House starring a pastor who said Jews are going to hell, and then signed an executive order to combat anti-Semitism and the burgeoning anti-Israel movement on campuses, which Jews could not agree was helpful or an insult to their loyalty to the US.

During the UK election campaigning, the Chief Rabbi Ephraim Mirvis, a Johnson supporter with long-standing ties to the Tories, broke a historic precedent of neutrality with a strongly worded column in The Times. In a sustained attack on Corbyn’s party, he wrote: “I regret being in this situation at all. I simply pose the following question: What will the result of this election say about the moral compass of our country?” The outcome of the vote is now known, hopefully the nation’s democratic values have not been irreparably damaged.