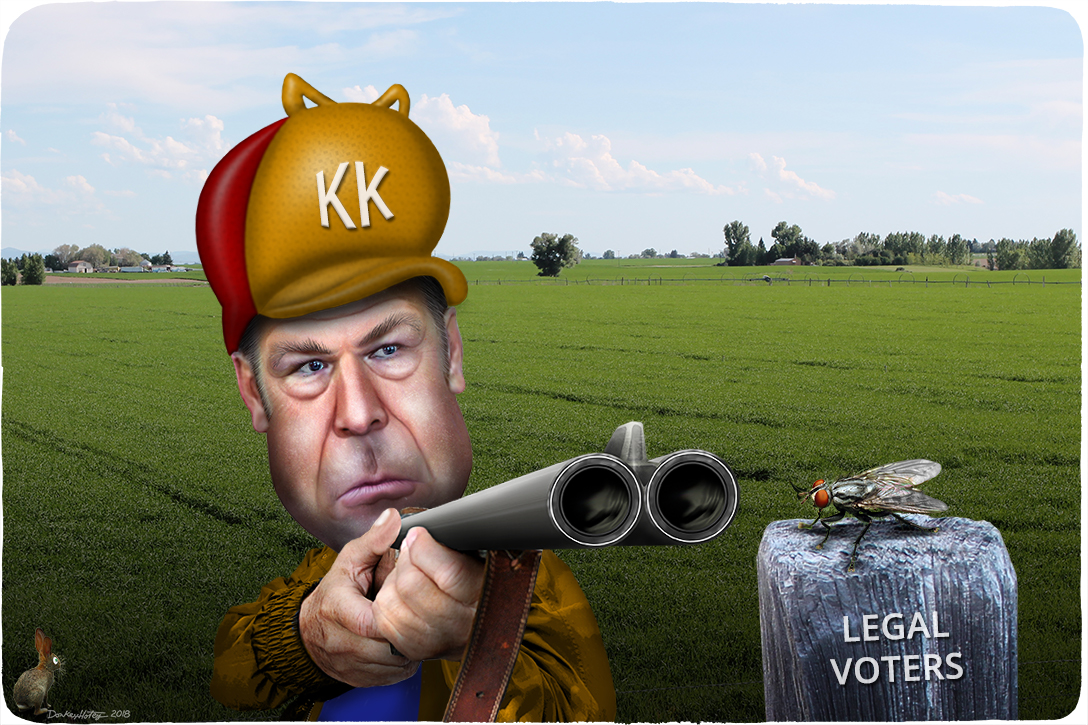 If Kansas Secretary of State Kris Kobach (R) weren’t such a grave threat to US democracy, he would be an almost comically inept bad guy in the mold of Elmer Fudd. While the latter hunts a “wabbit,” Kobach always claims to be on the hunt for huge numbers of non-citizens who cast illegal votes.

That particular danger to democracy is about as real as Bugs Bunny.

Kobach, however, is a different story, because he actually is a threat to fair elections in the United States. Unfortunately, not enough people are paying attention. This week, for example, far away from the media spotlight, another of his voter disenfranchisement schemes is being debated in a courtroom in Kansas City.

At issue is a Kansas law requiring people to provide proof that they are US citizens prior to registering to vote. Ostensibly, the law’s purpose is to prevent non-Americans from registering and voting. That seems like a worthwhile goal. However, the law addresses a problem that doesn’t exist, and potentially intimidates people into not exercising their right to vote as citizens.

As much as Kobach, or President Donald Trump, wants people to believe that millions of illegal votes have been cast, there is no evidence that this has happened. Even Kobach’s own numbers don’t support his claim.

In his opening statement defending the law, Kobach said 129 non-citizens either registered to vote or have attempted to do so since 2000, and he claimed that is the “tip of the iceberg.” That’s not a huge number in a state with a population of nearly 3 million.

It’s also not proof of fraud. Instead, many of these cases probably involve human error and ignorance — for example, when a DMV employee asks a non-citizen applying for a driver’s license whether he wants to register to vote, or when permanent residents think they may be eligible.

It’s worth keeping in mind that voter fraud is an incredibly stupid crime to commit. If successful, the impact is minimal, i.e., one vote among millions. If caught, however, the person committing voter fraud is fined, imprisoned or both.

Quite frankly, it’s hard to believe that a significant number of people would risk a felony conviction to cast one extra vote in an election. And neither research studies nor anecdotal evidence suggest it is a widespread problem.

The proposed solutions, like Kobach’s law in Kansas, however, often are a real problem. In this case, it disenfranchised thousands of eligible voters by making it arduously difficult to sign up.

For example, the people who did not have the required proof of citizenship at the time they tried to register had to sign a statement swearing, under penalty of perjury, that they didn’t have the documents. But how many people can be absolutely certain that they don’t have a birth certificate and would swear to it?

As ACLU attorney Dale Ho put it: “Enforcing this law is like taking a bazooka to a fly.” That’s certainly an approach Elmer Fudd could empathize with.

Those who are aware of Kobach’s other tricks won’t be surprised that this law mainly disenfranchised minorities and young people, i.e., demographics that are more likely to vote for Democrats.

In this case, things may turn out OK. So far during the trial, the sheer incompetence of Kobach and his team has tested the patience of the presiding judge, who at one point told him that this is “not how trials are conducted.”

While voter fraud is a crime, the type of voter disenfranchisement that Kobach has tried again and again is unfortunately not. So even if this law is struck down, chances are that he will be back with yet another scheme to deny eligible Americans the right to vote — under the guise of fixing a problem that doesn’t exist.