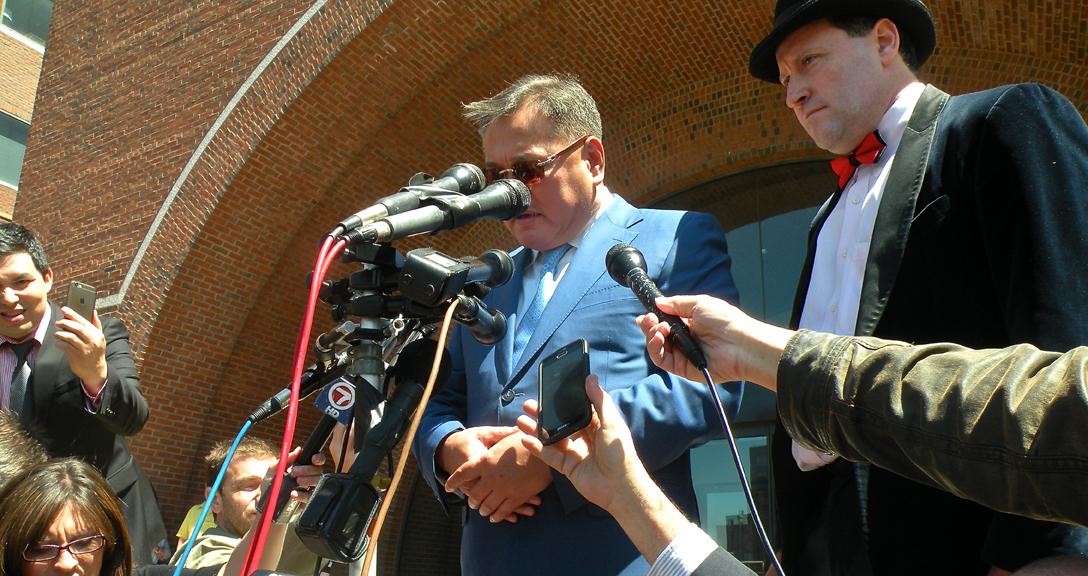 Amir Ismagulov, father of Azamat Tazhayakov, spoke out against what he thought was unfair treatment of his son. Why was Azamat sentenced to 3.5 years behind bars, when other known Tsarnaev associates weren’t even questioned? Photo credit: Jill Vaglica / WhoWhatWhy
Criminal Justice Deep State Government Integrity

Looking for a Longer Jail Sentence? Cooperate with FBI!

To the mounting pile of oddities surrounding the Boston Marathon Bombing—the largest terrorist attack on domestic soil since 9/11—we add yet another: the wide disparities in the government’s treatment of the people associated with the accused bombers, Dzhokhar Tsarnaev, who was convicted and given the death penalty, and his dead elder brother, Tamerlan.

Here’s the odd thing: the more that these people cooperated with the government, the harsher their punishment. Conversely, a few who failed to cooperate with the FBI escaped prosecution entirely.

Officials have made clear that the harsh sentences meted out to most of the Tsarnaev brothers’ former friends were intended to send a message: Do not obstruct terror investigations. Paradoxically, these outcomes may have the opposite effect.

Attorneys following the case say the real message that comes through is this: Cooperate with the government without a lawyer before you are arrested—and you will get jail time. Cooperate after you have been arrested, and either plead the Fifth or speak only with a lawyer present—and you end up with less jail time, if any.

The most striking example of ending up the worse for cooperating is surely Ibragim Todashev, a friend of Tamerlan Tsarnaev, who purportedly had just confessed to some complicity in a separate triple homicide before the FBI shot him seven times—killing him. The cases of others are less dramatic, but no less revealing of a dysfunctional process. Their stories follow.

The full story reads like a 19th-century Russian novel—it can be difficult to keep all the players straight. Here are the particulars on the treatment of each of these tangential figures, arranged by jail time dispensed.

Crime: Obstruction of justice and conspiracy. When the FBI posted pictures of the bombing suspects and asked that people come forward and identify them, Kadyrbayev did not do so. Additionally, he and another friend of Dzhokhar’s, Azamat Tazhayakov, removed from the younger Tsarnaev’s dorm room various belongings of his, including a laptop, thumb drive, bag of marijuana, and a backpack that had contained illegal fireworks.

Involvement with the FBI: Kadyrbayev pleaded guilty in August 2014 as part of a deal with the government. Had he not changed his plea to guilty, Kadyrbayev would have faced 25 years in prison. He did not, however, agree to testify for the government in any of the linked cases, meaning that he will serve six years rather than 3.5, like another Tsarnaev associate, Azamat Tazhayakov.

Involvement with the FBI: As part of an agreement with the government, in exchange for reduced prison time, Tazhayakov agreed to testify against both Tsarnaev and Kadyrbayev. Although he was never actually called to the stand, Tazhayakov’s willingness to testify knocked 2.5 years off what would otherwise have been a six-year sentence, like Kadyrbayev’s.

Crime: Lying during a terrorism investigation. He saw Kadyrbayev and Tazhayakov remove the backpack from Tsarnaev’s dorm room, but lied to investigators that he had not been there when they did it.

Involvement with the FBI: On April 26, Phillipos signed [but did not write] a confession to the FBI admitting to false statements.

Crime: Obstruction of justice and lying during a terrorism investigation. According to his indictment, Matanov initially lied to the FBI about the fact that he had driven the Tsarnaevs to dinner on the evening of April 15; he also downplayed the extent to which he shared the brothers’ attitude toward violent jihad, and he deleted his computer history during the week of the bombing.

Involvement with the FBI: Matanov had first contacted the authorities four days after the bombings to notify them that he knew the Tsarnaev brothers. After reluctantly pleading guilty to lying to the FBI, Khairullozhon Matanov received 30 months in prison.

Even as he pleaded guilty, he maintained his innocence. The  judge at his plea hearing took note of his reluctance: “You’re afraid if you go to trial you could be found guilty of all four of these charges and the sentence might be longer than the 30 months? Is that it? That you think you are not a guilty person but given the circumstances you’d rather [not] go to trial?”

Matanov nodded, “I signed a deal and I found guilt most fitting for my situation,” he replied.

Sentence: None. Vakhabov pleaded the Fifth.

Crime: Vakhabov lied to the FBI about “matters of great import” concerning the Boston bombing investigation, according to a court transcript. WhoWhatWhy previously reported on Vakhabov who, according to the government, committed the same federal crime as Kadyrbayev and Tazhayakov: impeding a federal law enforcement investigation by providing false information.

Involvement with the FBI: It’s uncertain exactly what Vakhabov’s relationship with the FBI was, but it’s clear that the FBI was aware of him and that Vakhabov lied to them. In contrast to the wave of arrests, brutal profiling, and harsh crackdown directed at others of the Tsarnaevs’ former friends for the slightest infraction committed during the FBI’s Boston bombing investigation, the government has bafflingly gone easiest on the least cooperative of Tsarnaev’s associates. Why?

Crime: Not charged, but she was obviously guilty of conspiring to destroy evidence. Dias Kadyrbayev and Azamat Tazhayakov brought the backpack they had removed from Dzhokhar Tsarnaev’s dorm room to the home they shared with Bayan Kumiskali. Learning that it had contained illegal fireworks, she demanded that they throw it out, so the two men tossed it into a garbage can in the street.

Involvement with the FBI: For unknown reasons, she was not charged with obstruction of justice and was granted immunity.

Azamat Tazhayakov’s lawyer Arkady Bukh thinks that Kumiskali was not appropriately punished. “Look at Bayan,” Bukh said, “the girlfriend of Dias, who actually instructed both boys to throw away the bag. She’s actually the most culpable, but at the end of the day, she flew back to Kazakhstan and he got prosecuted,” Bukh said.

Without Lawyer, Reward for Cooperation Leads to Harsh Sentences

The telling point of this story is laid bare in the treatment of Dias Kadyrbayev and Azamat Tazhayakov. There’s no doubt that both Kadyrbayev and Tazhayakov were in contact with the Tsarnaev brothers in the immediate hours after the bombing, so it makes sense that the FBI would want to speak with them. What doesn’t make sense is that after Kadyrbayev and Tazhayakov cooperated—and gave investigators all the evidence they had at that point—they would both be punished.

Here’s what transpired: At 8:43pm on April 18—almost two hours before Officer Sean Collier was shot, presumably by one of the Tsarnaev brothers—Dias Kadyrbayev sent a text to Dzhokhar Tsarnaev. Here is their short, chilling conversation:

U saw the news?

Yea bro, I did

u saw yourself there? Ahaha…hahaha

If yu want u can go to my room and take what’s there. But ight [sic] bro Salam aleikum

It was after this conversation that Kadyrbayev and Tazhayakov went to Tsarnaev’s dorm room and removed the items belonging to him: a laptop, a thumb drive, a bag of marijuana, and a backpack that had contained illegal fireworks. Then the two went back to a home they shared with a third friend, Bayan Kumiskali. Alarmed by what she recognized as possible evidence, Kumiskali insisted Kadyrbayev  dispose of the backpack.

On the morning of April 19, SWAT teams and FBI agents arrived at that house looking for Tsarnaev, who had been receiving bills for phones at that address. There, they found Kadyrbayev and Tazhayakov. They handcuffed and questioned them in their cars. They had no search warrant, but persuaded Kadyrbayev to give them written consent to search his home. And they persuaded the two friends to go “voluntarily” to the State Police Barracks for further questioning,” FBI Special Agent John Walker testified in a May 2014 pretrial hearing.

Azamat Tazhayakov’s lawyers, however, say that the very reason Tazhayakov faces jail time is because he cooperated with investigators.

“Because he spoke with the government and gave statements against his own interest,” Tazhayakov’s attorney Arkady Bukh said in response to a question from this reporter at a June 5 press conference.
“If Azamat were to have met with the agents and refused to start talking, he’s unlikely to have been arrested or even face charges. Azamat’s case is based on his own admissions,” Bukh told WhoWhatWhy. “My client invited the police over to his apartment building and said ‘the cops are interested in speaking to me. Here’s my address, come over and speak to me.’”

Added another of Tazhayakov’s attorneys, Matthew Myers, “That’s the opposite kind of mindset of a person who’s obstructing.”

Bukh said that he would normally advocate for his clients to help the government, particularly during terrorism investigations. This case, however, turned out to be different. Though Kadyrbayev and Tazhayakov both found agents, initiated the call, and told investigators what evidence they had in their possession, the government showed up to arrest them instead of working with them.

Although these cases clearly send a strong message warning against obstruction of justice, what is the message about the consequences of cooperating with the FBI? Could outcomes like these deter law-abiding citizens from cooperating with law enforcement authorities in future terrorism investigations?

Attorneys for the two Kazakh students have repeatedly noted that in their home country, the culture towards police is very hostile, yet the students still came forward to help out.

“In Kazakhstan, if you get involved with the police, you get dragged into something really bad and they will use it against you,” Bukh said in an exclusive interview with WhoWhatWhy. “I think the government should be much more cautious in prosecuting people who will come forth and give evidence,” he said. A juror in Tazhayakov’s trial speaks to reporters outside the courthouse. Photo credit: Jill Vaglica / WhoWhatWhy

Should the FBI Be Considered a Defendant?

Because some friends of the Tsarnaevs failed to inform authorities about the brothers’ identities after seeing their faces on television, the friends are being implicated in the murder of Officer Sean Collier,  whose death, prosecutors say, could have been prevented if only the suspects had been identified sooner. Based on that criteria, shouldn’t the FBI agents who had been investigating the Tsarnaev family prior to the bombing be held responsible for Collier’s death as well?

Clearly, the FBI knew a lot about this family. As WhoWhatWhy has previously reported, the Bureau interacted with the Tsarnaevs long before the bombings. As attorney Arkady Bukh put it,

“The Tsarnaevs had been questioned for hours and hours about terrorist activities or their jihadist mentality before the attack. They had been specifically targeted on terrorist or Islamist connections, questioned for hours and hours on a few incidents, and somehow, those FBI agents missed the moment to save the life of their colleague [Collier], they didn’t come forth and say they recognized Tsarnaev, and somehow our client is being held responsible for not saving the life of an officer.”

This begs the question: What is the difference between a private citizen withholding potentially life-saving information—and the FBI doing so?

This leads to yet another, even more profoundly disturbing query: Could the FBI have prevented the Boston bombing itself? That’s a question nobody asked—not even the defense—in the recently concluded trial of Dzhokhar Tsarnaev, now facing the death penalty.