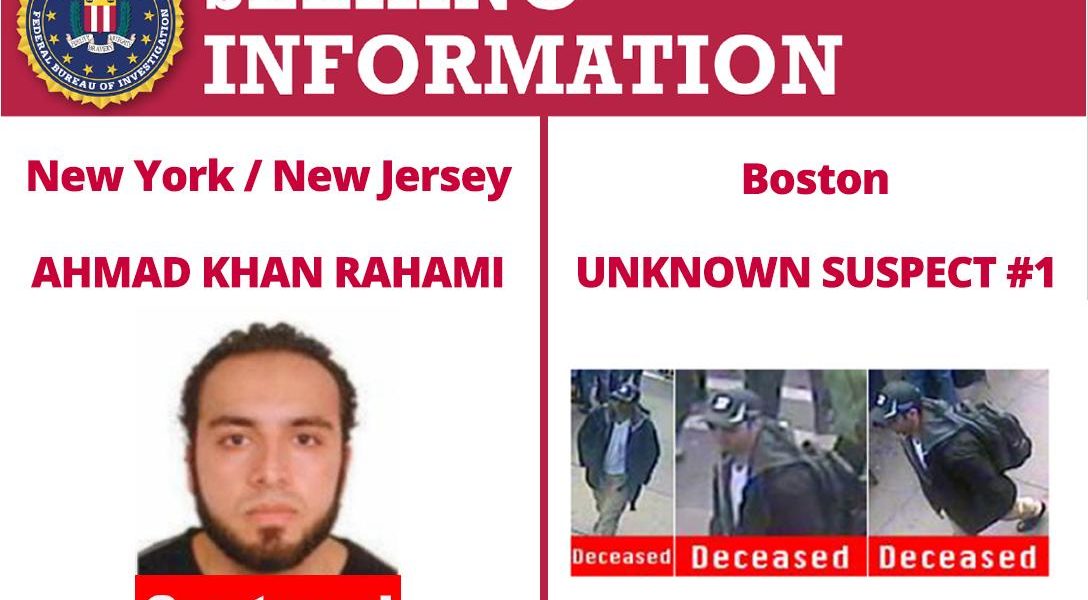 Another Terrorist, Another Past Connection with the FBI

The latest alleged perpetrator is Ahmad Khan Rahami, a young Muslim man who grew up in America and likes souped-up cars. He became “self-radicalized” watching videos on the Internet that inspired him to blow up innocent Americans.

Some experts say the bombs he made show a high level of sophistication and training, but with more than a half a dozen bombs deployed, not a single person was killed. Some saw it coming — others say they can’t believe it.

He traveled to Afghanistan or Pakistan — or both — in the years prior to the attack. Nobody seems to know what he did there, but authorities are pretty sure there’s no wider conspiracy.

Cornered and desperate after authorities released his picture to the public, it’s a small miracle the suspect is still alive after a wild shootout with police.

The Boston Herald understandably thinks so. In a piece titled “Attack had eerie resemblance to Boston Marathon bombings,” the Herald points out the many superficial similarities to the 2013 attack at the Boston Marathon. The lead paragraph reads: “From pressure cookers, the release of a suspect photo, to the subsequent manhunt and shootout with cops, yesterday’s arrests of Ahmad Khan Rahami in New York City and New Jersey has stirred echoes of blasts at the Boston Marathon in 2013, security experts said.”

But there are far more significant similarities.

BREAKING PHOTO! Here is the second device found by a NYSP Sgt. At 27 street and 7 Ave. investigation is ongoing pic.twitter.com/x7o9Rr30I3

The reliably pro-law-and-order Herald left out the part about the FBI’s prior contact with the suspect. The New York Times, to its  credit, did inform us that the FBI conducted an “assessment” on Rahami in 2014, because his father told them he was a terrorist. Then dad took it back.

Interestingly, the Times also mentioned that the suspect’s father claims to have fought with the CIA-supported Afghan Mujahedin against the Soviets back in the 80s. The Times didn’t attach much significance to either revelation and probably won’t pursue the connections much further.

But, as with Tamerlan Tsarnaev, another recent “lone wolf” who suddenly started acting as a cartoonish Muslim fanatic, the FBI and CIA can be found lurking in the back story.

It is entirely possible that there are a lot of so-called lone wolves on the prowl — a sort of self-directed fifth-column of ISIS. But, according to investigative journalist Trevor Aaronson, an alarming number of them are being pushed and prodded by provocateurs on the federal payroll. We don’t know if Rahami was similarly pushed, but it’s a valid question nonetheless.

The FBI claims to have sent undercover agents to “investigate” Rahami, but “didn’t find enough information to charge him,” according to the Boston Globe. What that investigation consisted of is still, and likely will remain, unclear. The FBI seldom reveals its “sources and methods.”

At the very least, the public should be told what this type of contact looks like and whether it is at least conceivable that such government actions can contribute to pushing young men to commit these types of crimes.

But despite these obvious concerns, the US government’s “war on terror” strategies are strangely absent from President Barack Obama’s Countering Violent Extremism program, which is currently grappling with the thorny issue of what might be provoking these desperate acts.

Will we get a legitimate investigation that delves into the precise nature of federal agents’ interactions with Rahami, or will we just get another whitewash that only looks at “intelligence failures.” It will most likely be the latter (here’s why).

How likely is it that Rahami’s travel to Afghanistan, an active war zone, escaped the scrutiny of federal agents? Tamerlan Tsarnaev traveled overseas to a geopolitical hotspot in the years before the Boston Marathon bombing, but the Feds claim to have ignored internal warnings about him and waved him through at the airport.

The FBI appears to be covering up their prior interactions with Tamerlan Tsarnaev. Will we see the same thing with Rahami?

Authorities never nailed down exactly where the bombs the Tsarnaevs used were made and who made them. Will we get these details in the Rahami  case? The public would like to know who is making all these “sophisticated” explosives.

Like Rahami, Tamerlan Tsarnaev had many of the hallmarks of an individual the FBI routinely coerces to act as undercover informants. In fact, WhoWhatWhy has documented compelling evidence (see here, here and here).

And what about that decision to release the photos of Rahami? As with the Tsarnaevs such an action almost guarantees a desperate reaction from the pursued — not surprisingly ending in a potentially lethal gun battle.

Former Boston police Commissioner Edward F. Davis, who questioned the wisdom of releasing the Tsarnaevs’ photos after the Marathon bombing, again seems to be questioning the release of such photos. He told the Boston Herald: “Once those pictures go out, that’s when it’s most dangerous. … He [Rahami] attempted suicide by cop. It’s all very familiar.”