Revealed: What Bush Said About 9/11 Behind Closed Doors

So, you may not remember this, but after 9/11, President George W. Bush and Vice President Dick Cheney managed to avoid testifying publicly about the historic tragedy and massive government screw-up (to be kind). They very reluctantly agreed to meet in private with a blue ribbon panel — but only if they were not sworn in, i.e., so they could lie with impunity.

You also may not know that the contents of that meeting have never come out — until now.

Recently, an entity known as the Interagency Security Classification Appeals Panel released a summary of what was said — to almost total media silence.

Since you come here for a deeper and more informed take on subjects that get ignored or suppressed, I wanted to share with you some revealing things about that Oval Office session. But before we get to the content, let’s look at the report’s narrative writing style, which is also revealing.

Although it’s marked “SENSITIVE SECRET,” this document is neither a record of a legal deposition nor a transcript. It was clearly written as a narrative-shaping publicity release rather than an honest, factual public record.

First, notice all the unnecessary cozy, comforting words used to create the warm picture of a family room — strange given the morbid topic and for a “Memorandum for the Record.” (Why not just name the room where they met?)

The President and Vice President were seated in chairs in front of the fireplace. The President’s demeanor throughout was relaxed. He answered questions without notes.

Commissioners and Gonzales were on sofas and chairs. Zelikow, Cunningham, and Monheim sat against the wall.

The portrait of Washington was over the fireplace, which was flanked by busts of Lincoln and Churchill. Paintings of southwestern landscapes are on the wall. It was a beautiful spring day.

The caveat below, “Notes are not verbatim” is also odd. Usually quotes, not notes, are described as verbatim or not. Was this meeting not recorded? If not, what are these “notes” based on? Another collection of notes in the original report, one that is actually secret? In any case, throughout the memorandum, Bush is presented as a gracious, smiling host, just doing his doggone best to get at the truth. (Quoted material has been compressed.)

Notes are not verbatim.

The President welcomed the Commission and expressed gratitude for its work. … He wanted the Commission to be able to do a good study. It should not be about blaming people. … The country was ill served by playing the blame game.

The President smilingly said he knew time was limited and he would try to answer questions briefly.

Lots of warm smiles — but no explanation, no accountability. This echoes an earlier theme. Bush shielded himself in the standard self-serving attire of every guilty government official, the cloak of patriotism. He told the 9/11 Commission (this during his tough 2004 reelection campaign), that he “didn’t see much point in assigning personal blame for 9/11.” Perhaps because assigning personal blame might have led to… him being blamed.

No Fault Divorce From Reality

Indeed, it’s essential to underline that Bush mysteriously failed to assign fault to anyone — despite the stunning failures and bizarre actions that significantly eroded the legitimacy of the government’s official 9/11 story.

Truth be told, Bush did the opposite: retaining and actually rewarding those whose failings ensured the success of the 9/11 attacks.

CIA Director George Tenet, who did not act on warnings, was not only kept on for three more years, but five months after he retired in July 2004 — and just after Bush was in the clear politically, having won reelection in a razor-thin race — Bush awarded Tenet the Presidential Medal of Freedom — the nation’s highest civilian honor. 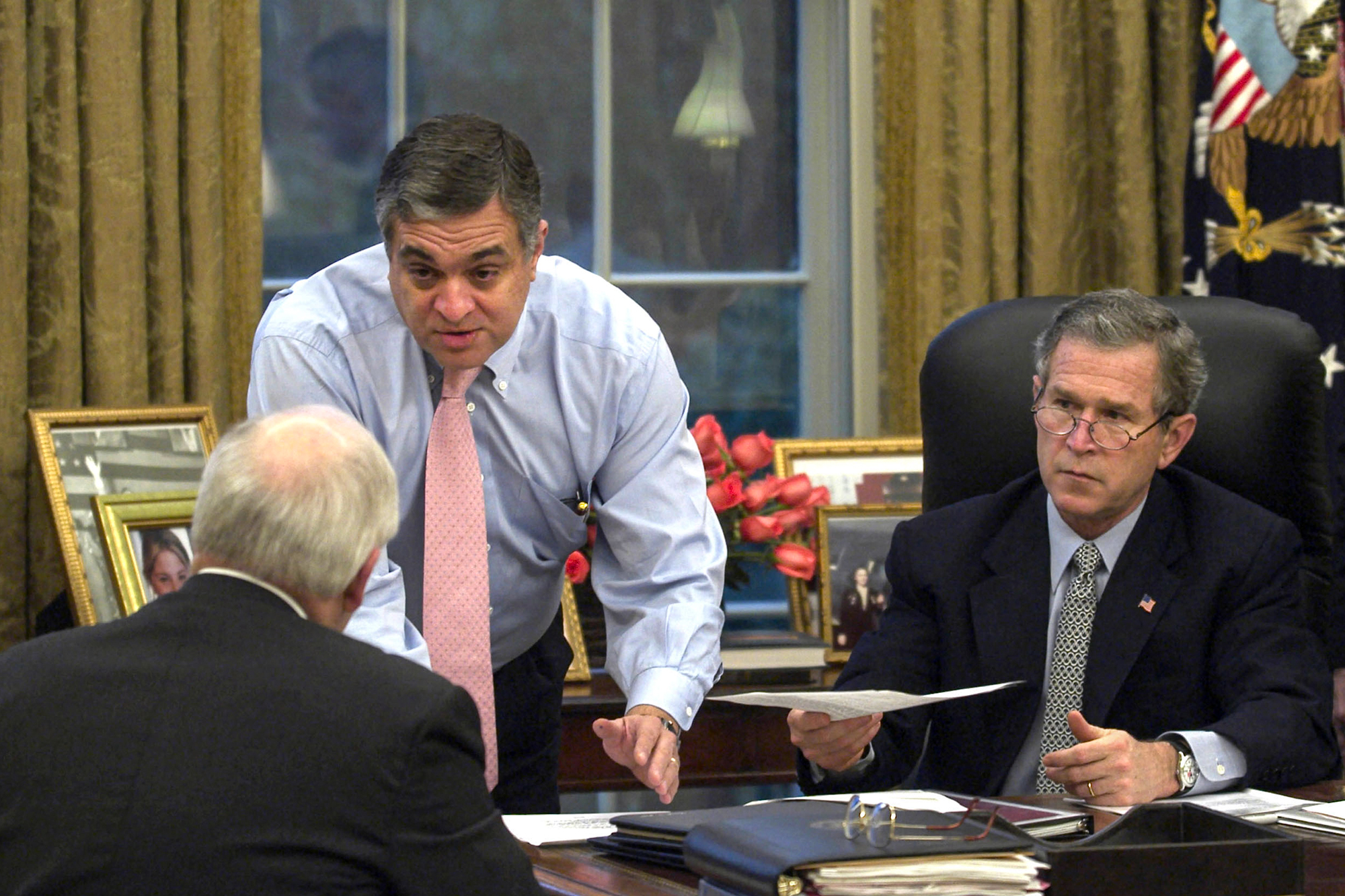 Bush had reluctantly created the 9/11 Commission under extreme pressure from victims’ organizations, and while facing a broad public mandate to get to the bottom of the diabolically choreographed airplane attacks, which were juxtaposed with across-the-board failures of the FBI, CIA, NSA, and the entire US military, among others.

Bush had fairly little to worry about: The commission itself was benign at best, if not actually complicit. It met with Bush and Cheney only informally; they were not made to testify. And even though the substance of what was discussed remained secret for 18 years, we now find out how little was actually done at the time. The largely weak-kneed commission failed to ask the tough questions suggested by a steering committee of victims’ families.

The families, of course, wanted sworn public testimony — and deserved it. So did the public. Instead, “investigators” held this cozy private meeting with no one under oath.

Bush’s staff had spent days prepping him for the meeting, and ensuring a super-friendly atmosphere with the commissioners.

And the questions suggested by the victims’ families — such as “Why was our nation so utterly unprepared for an attack on our own soil?” and “Why [has] no one in any level of our government yet been held accountable for the countless failures leading up to and on 9/11?” — were apparently never even asked.

This is exactly the kind of thing that causes a large segment of the public to dismiss the entire government “accountability” process as a joke. It also creates an environment in which “conspiracy theories” — many of them probably at least partially wrong — flourish.

The large legacy media outlets are also complicit by their continuing failure to even look into America’s largest traumas. Sometimes they seem to go out of their way to whitewash critical aspects of events like 9/11. For instance, Newsweek’s Bush-friendly way of presenting a particularly knotty problem:

August 6, 2001: In the doldrums of summer while on vacation in Crawford, Texas, President George W. Bush receives his daily intelligence briefing with an article entitled “Bin Laden determined to strike in U.S.” CIA Deputy Director John McLaughlin draws the short straw and has the summer duty of briefing the president.

The Presidential Daily Brief article was intended to give a background summary of the al Qaeda threat. Contrary to subsequent claims, it was not a specific warning, nor did President Bush ignore the report. According to the 9/11 Commission Report he had, in fact, asked his briefers on several occasions “whether any threat pointed to the United States.”

That, of course, is a constant theme of mine, both in my book, Family of Secrets, and, to the extent we’re able with limited staff and resources, at WhoWhatWhy, the nonprofit news organization I founded in the Bush era out of frustration with journalism’s unwillingness and/or inability to tackle these profound life-changing events.

How pathetic was the 9/11 Commission? According to the summary — and carefully studied by our friends at the nonprofit Florida Bulldog (upon whose reporting I gratefully base my analysis and comments here) — commission member Richard Ben-Veniste stated in the Oval Office meeting that “the President and the Commission were on the same team.”

And indeed they were. Ben-Veniste’s prior work included serving in the 1970s as a leading Watergate prosecutor. As readers of Family of Secrets know, I (along with several other dedicated investigative journalists) was shocked to learn through deep research that Watergate itself, and the version happily promoted by the system, including legacy media — was nothing like what we were told.

The same players and institutions, including the intelligence organizations and the Bush family, were involved in extensive plotting and deceit — even against Nixon himself — with the American people none the wiser to this day.

Is it any wonder that “investigative commissions” never seem to unearth anything truly revelatory, and that nothing major ever seems to change as a result of their work?

The commission itself, in the preface to its public report, stated: “Our aim has not been to assign individual blame.”

That essentially negates our need to read the report, and it is very telling. So too are bits and pieces from the newly released summary described above. It was prepared by 9/11 Commission Executive Director Philip Zelikow. 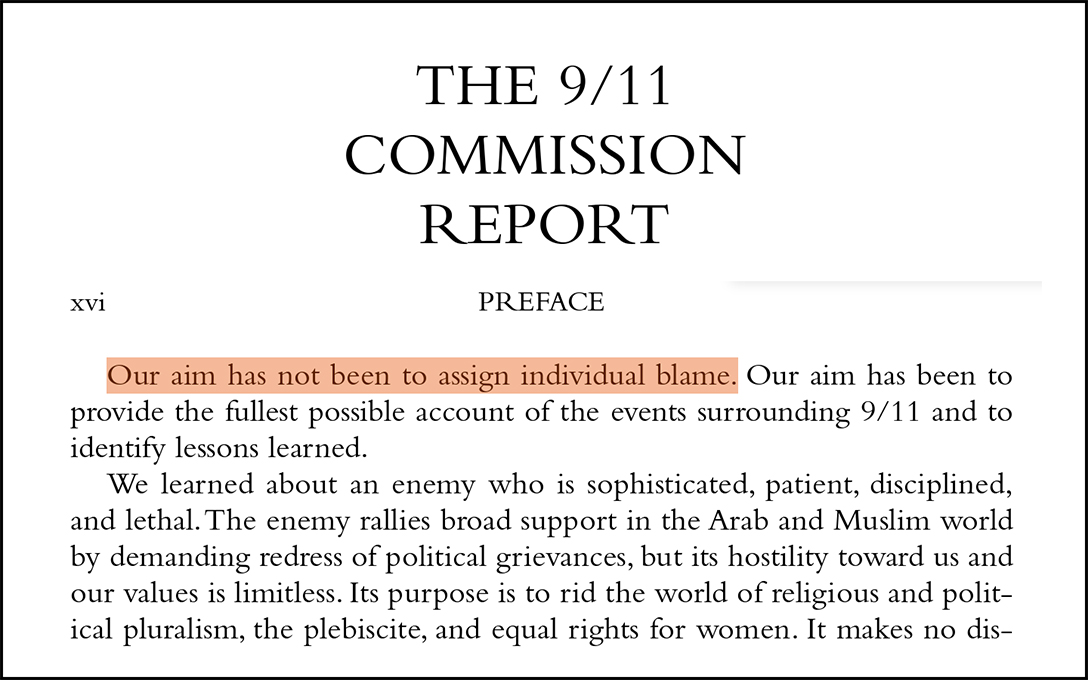 Right after the Oval Office meeting, Bush went outside and told the press, “I’m glad I did it. I’m glad I took the time. … I enjoyed it.” As if it were some minor matter and utterly voluntary — and somewhat enlightening or energizing, like taking a yoga class for the first time. Not dealing with the deaths of almost 3,000 of his fellow countrymen.

Bush’s team, terrified of gaffes and accidental revelations, set all kinds of insane restrictions on the meeting — and would only let Bush speak to the commission members if accompanied by an adult, Vice President Cheney. (And a great way to make sure that they had a unified account to provide.)

According to the summary, Bush repeatedly told the commission there were virtually no advance warnings of “threats in America. … The threat was overseas.” This raises the confounding possibility that Bush could not grasp that an “overseas threat” might result in an attack inside or on the United States.

But no, even Bush got it. He was playing games with the patty-cake commission.

The commission’s Ben-Veniste pointed out that the presidential daily brief had actually been entitled, er, “Bin Laden Determined to Strike in U.S.”

In fact, right in the first sentence of the intelligence brief, Bush had been told — and, because they knew he was not generally interested in these types of things, in italics — that combined sourcing showed Osama bin Laden aspiring for the past four years to attack the US. Indeed, one source specifically mentioned attacking Washington.

We get no indication that Bush (with Cheney looking on) had his feet held to the fire as he brazenly lied. His claim that he had not been warned was directly contradicted by the threat briefing that he received. It mentions FBI reports on “suspicious activity in this country consistent with preparations for hijackings or other types of attacks, including recent surveillance of federal buildings in New York.”

The FBI also warned that the US’s Saudi allies were busy funding exactly the kinds of extremists who had already launched multiple bloody attacks on US targets outside the country.

Plus, it didn’t take a genius — after terrorist attacks on US troops in Saudi Arabia, at the US’s embassies in two East African countries, plus on the USS Cole, resulting in hundreds and hundreds of fatalities — to realize that more attacks would be coming. Combining that with the FBI warnings about possible domestic attacks, and, well, one could conceivably anticipate… a domestic attack by foreign terrorists.

And, in fact, there had already been a bombing of the World Trade Center in New York in 1993.

According to the summary, Bush explained that he stayed with a class of elementary students even after being told of the attacks because he was “collecting his thoughts.” That’s not quite what we would have expected of a Churchill.

It’s pointless to even begin articulating outrage at a country that would elect and reelect a total buffoon like Bush — and at a media and political establishment that let him evade responsibility for the tragedy of 9/11.