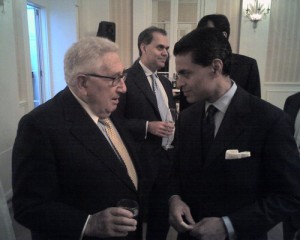 Why We Can’t Stand Anyone CNN Likes I admit it. I am a pervert. I take perverse pleasure in reading people who are really, really, way off-base— presumably by accident—about practically everything. Thomas Friedman is a favorite. But it’s hard to top Fareed Zakaria, the Global Power Structure’s favorite “Person of Color (of some sort.)”

In this essay, headlined “What Were They Thinking,” Zakaria starts out by lauding George W. Bush.

[box]Over the years, and long before the start of the Arab Spring, Bush has been consistent in pressing his freedom agenda in Africa and the Middle East — in fact, the world over.

It’s an optimistic conservatism that contrasts strongly with the pessimism of many other conservatives.[/box]

I mean, how many foolish notions can you jam into two sentences? Nobody over about the age of five really believes that Bush, happy to clamp down on freedom at home in the name of some unknowable “homeland security”—to say nothing of what he did to foreigners, in Iraq and Afghanistan— ever had a “freedom agenda.” Of course, I’ll buy the “optimistic conservatism”—who wouldn’t be optimistic when everything is handed to you?

But what really caught my eye was Zakaria’s disappointment at Bibi Netanyahu’s negativity toward Arab Spring, and, Zakaria’s especially pungent disappointment with….the Saudis—for not embracing revolution in the Arab world.

The irony is that in his deep suspicion about the Arab Spring, Bibi has a strange bedfellow — the Saudi monarchy.

It’s not often that you see Israel and Saudi Arabia agree on policy, but the two share a general fear of the upheavals in the Arab world.[/box]

Now, nobody could be surprised that Netanyahu would be wary of uprisings anywhere near his borders. Nor the Saudis. So why does Zakaria label them as “strange bedfellows” with the Israeli regime on this issue? If they’re strange bedfellows, then it’s only because their constant liaisons over the years have come about under cover of night.

The only “surprise” about Saudi opposition to Arab Spring uprisings is that they would oppose events that were at least partially fomented by the Saudis’ Western allies. The Saudis were plenty happy with the uprising against Qaddafi, and they’ve been backing the uprising in Syria—albeit in both cases for strategic, and even sectarian reasons. Everywhere else, things are looking pretty fine and dandy.

Zakaria understands none of this, seemingly.

[box]The Saudis… recently hosted a conference to bolster the very opposite of modern democracy: monarchies. [snip]

What were the Saudis thinking?

At home, the Saudis dole out patronage to gain support. They have given tens of billions of dollars in assistance to the unemployed and they’ve increased salaries of soldiers and public servants. Gasoline costs some 50 cents a gallon there, an eighth of what Americans pay.

The Saudi story is, of course, more nuanced than a simple story of carrot and stick. The monarchy was popular; it was even before its latest round of largesse. And Saudi Arabia is perhaps unique in the Arab world in that the general population is more conservative than its leadership.[/box]

Zakaria knows that the Saudi monarchy is “popular” how? Those reliable Saudi public opinion polls, carried out by people in hangman’s outfits?  And as for the “patronage,” what about calling that bribery from a dictatorial clan that, increasingly desperate, will try anything…even, if absolutely necessary, giving a little of the oil revenues they steal back to the people.

What were the Saudis thinking? Well, what was Zakaria thinking? And is CNN ever thinking?

Maybe if CNN hired some real, actual journalists and turned them loose to do their thing, to find out what is actually going on and who is behind it, the cable network might get out of the ratings toilet. Who knows? Worth a try.

The bigger problem is not so much the journalists but the media organization controlling the journalists. The journalists would report the news if the weren’t locked into the “There are no conspiracy” fairy tales of their employers.

True, but today most talking head style journalists are “fabulously” wealthy and share their employers views.

Fareed is one of the few people I  occasionally watch on CNN . I thought his interview with the pres. of Iran was gutsy. Of course for every good interview a lot  of corporate “bum” must be kissed. I PVR past most of his guests who are generally Christo-Capitalist appologists.The Israel -Saudi relationship is very much like the Democrat- Repuplican relationship domestically. I don’t quite understand why you chose to target him for special criticism. There are so many better ones. How about Andrea Mitchell , Alan Greenspans wife ?

Washington reporters hob nob with the politicos, go out to dinner with, party with, date and marry. They’re all one big happy family. So, it’s a mutual admiration society. Free press? Hah!

Fareed Zakaria is a total weasel. If the blood is far enough away….

WHO owns the media?
WHAT is their agenda?
WHY are intelligent people afraid of the truth?

I don’t know about Bibi’s borders but it’s my understanding that Israel has no legally defined borders. Please correct me if I am wrong.