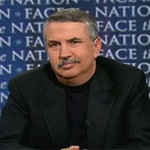 Journalists cannot always get it right. But some, with a very big platform and impact, have more responsibility to get it right than most. One of those with a great deal of influence is the New York Times columnist and best-selling foreign affairs writer Thomas Friedman.

What did he say about Greg Mortenson, now at the center of a storm over his credibility? Here is Friedman on July 19, 2009:

I confess, I find it hard to come to Afghanistan and not ask: Why are we here? Who cares about the Taliban? Al Qaeda is gone. And if its leaders come back, well, that’s why God created cruise missiles.

But every time I start writing that column, something stills my hand. This week it was something very powerful. I watched Greg Mortenson, the famed author of “Three Cups of Tea,” open one of his schools for girls in this remote Afghan village in the Hindu Kush mountains. I must say, after witnessing the delight in the faces of those little Afghan girls crowded three to a desk waiting to learn, I found it very hard to write, “Let’s just get out of here.”

Let’s just pause here for a moment for a summary of the story that CBS 60 Minutes ran April 17:

Greg Mortenson is a former mountain climber, best-selling author, humanitarian, and philanthropist. His non-profit organization, the Central Asia Institute (CAI), is dedicated to promoting education, especially for girls, in remote parts of Pakistan and Afghanistan, and according to its web site, has established more than 140 schools there.

President Obama donated $100,000 to the group from the proceeds of his Nobel Prize. Mortenson’s book, Three Cups of Tea, has sold more than four million copies and is required reading for U.S. servicemen bound for Afghanistan.

But last fall, we began investigating complaints from former donors, board members, staffers, and charity watchdogs about Mortenson and the way he is running his non-profit organization. And we found there are serious questions about how millions of dollars have been spent, whether Mortenson is personally benefiting, and whether some of the most dramatic and inspiring stories in his books are even true.

Greg Mortenson’s books have made him a publishing phenomenon and sought-after speaker on the lecture circuit, where he has attained a cult-like status. He regularly draws crowds of several thousand people and $30,000 per engagement.

And everywhere Mortenson goes, he brings an inspirational message built around a story that forms the cornerstone of Three Cups of Tea and his various ventures – how, in 1993, he tried and failed to reach the summit of K2, the world’s second tallest mountain, to honor his dead sister, how he got lost and separated from his party on the descent and stumbled into a tiny village called Korphe.

Greg Mortenson (speaking on big T.V. screen): My pants were ripped in half and I hadn’t taken a bath in 84 days.

Mortenson (in T.V. interview): And I stumbled into a little village called Korphe, where I was befriended by the people and…

Mortenson (in another T.V. interview): They gave me everything they had: their yak butter, their tea. They put warm blankets over me, and they helped nurse me back to health.

Mortenson tells how he discovered 84 children in the back of the village writing their school lessons with sticks in the dust.

Mortenson (speaking on stage): And when a young girl named Chocho came up to me and said…

Mortenson (speaking on another stage): Can you help us build a school? I made a rash promise that day and I said, “I promise I’ll help build a school.” Little did I know it would change my life forever.

It’s a powerful and heart-warming tale that has motivated millions of people to buy his book and contribute nearly $60 million to his charity.

Jon Krakauer: It’s a beautiful story, and it’s a lie.

Jon Krakauer is also a best-selling author and mountaineer, who wrote Into Thin Air and Into The Wild. He was one of Mortenson’s earliest backers, donating $75,000 to his non-profit organization.

But after a few years, Krakauer says he withdrew his support over concerns that the charity was being mismanaged, and he later learned that the Korphe tale that launched Mortenson into prominence was simply not true.

Steve Kroft: Did he stumble into this village weak in a weakened state?

Kroft: Nobody helped him out. And nursed him back to health.

Krakauer: Absolutely not. I have spoken to one of his companions, a close friend, who hiked out from K2 with him and this companion said Greg never heard of Korphe till a year later.

Strangely enough, Krakauer’s version of events is backed up by Greg Mortenson himself, in his earliest telling of the story. In an article he wrote for the newsletter of The American Himalayan Foundation after his descent from K2, Mortenson makes no mention of his experience in Korphe, although he did write that he hoped to build a school in another village called Khane.

To get the full import of the revelations, including how many of the purported schools Mortenson helped are actually empty, or don’t exist, or say they got no help from him, and how Mortenson allegedly transformed villagers who were helping him into Taliban who had kidnapped him, you need to watch the full 60 Minutes segment.

Ok, back to journalist Thomas Friedman:

Indeed, Mortenson’s efforts remind us what the essence of the “war on terrorism” is about. It’s about the war of ideas within Islam — a war between religious zealots who glorify martyrdom and want to keep Islam untouched by modernity and isolated from other faiths, with its women disempowered, and those who want to embrace modernity, open Islam to new ideas and empower Muslim women as much as men. America’s invasions of Iraq and Afghanistan were, in part, an effort to create the space for the Muslim progressives to fight and win so that the real engine of change, something that takes nine months and 21 years to produce — a new generation — can be educated and raised differently.

Which is why it was no accident that Adm. Mike Mullen, the U.S. chairman of the Joint Chiefs of Staff — spent half a day in order to reach Mortenson’s newest school and cut the ribbon. Getting there was fun. Our Chinook helicopter threaded its way between mountain peaks, from Kabul up through the Panjshir Valley, before landing in a cloud of dust at the village of Pushghar. Imagine if someone put a new, one-story school on the moon, and you’ll appreciate the rocky desolateness of this landscape.

But there, out front, was Mortenson, dressed in traditional Afghan garb. He was surrounded by bearded village elders and scores of young Afghan boys and girls, who were agog at the helicopter, and not quite believing that America’s “warrior chief” — as Admiral Mullen’s title was loosely translated into Urdu — was coming to open the new school.

While the admiral passed out notebooks, Mortenson told me why he has devoted his life to building 131 secular schools for girls in Pakistan and another 48 in Afghanistan: “The money is money well spent. These are secular schools that will bring a new generation of kids that will have a broader view of the world. We focus on areas where there is no education. Religious extremism flourishes in areas of isolation and conflict.

…It is no accident, Mortenson noted, that since 2007, the Taliban and its allies have bombed, burned or shut down more than 640 schools in Afghanistan and 350 schools in Pakistan, of which about 80 percent are schools for girls. This valley, controlled by Tajik fighters, is secure, but down south in Helmand Province, where the worst fighting is today, the deputy minister of education said that Taliban extremists have shut 75 of the 228 schools in the last year. This is the real war of ideas. The Taliban want public mosques, not public schools. The Muslim militants recruit among the illiterate and impoverished in society, so the more of them the better, said Mortenson.

This new school teaches grades one through six. I asked some girls through an interpreter what they wanted to be when they grow up: “Teacher,” shouted one. “Doctor,” shouted another. Living here, those are the only two educated role models these girls encounter. Where were they going to school before Mortenson’s Central Asia Institute and the U.S. State Department joined with the village elders to get this secular public school built? “The mosque,” the girls said.

Mortenson said he was originally critical of the U.S. military in Iraq and Afghanistan, but he’s changed his views: “The U.S. military has gone through a huge learning curve. They really get it. It’s all about building relationships from the ground up, listening more and serving the people of Afghanistan.”

So there you have it. In grand strategic terms, I still don’t know if this Afghan war makes sense anymore. I was dubious before I arrived, and I still am. But when you see two little Afghan girls crouched on the front steps of their new school, clutching tightly with both arms the notebooks handed to them by a U.S. admiral — as if they were their first dolls — it’s hard to say: “Let’s just walk away.” Not yet.

It does seem, at times like this, that we ought not simply treat matters like the Mortenson Affair  as isolated cases, with the suddenly-embarrassing fellow hastily shown the door, nervous coughs all around.

We need to examine the uses of major media for propaganda purposes, and what responsibility, if any, host publications have to consider the impact of giving such propaganda their platform, without any due diligence.

Vietnam, after all, was not really all that long ago. And, as CBS noted in its report, those who knew Mortenson well, including staff, board members, and others, had been saying for many years that something was deeply wrong.