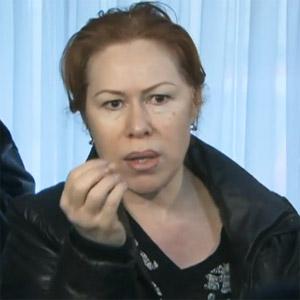 Maret Tsarnaeva, Dzhokar’s aunt who now lives in Russia, is among family members who were angered at the defense’s strategy to admit guilt and who still believes in her nephew’s innocence. Photo credit: CTV
Hidden Power Journalism & Media

Maret Tsarnaeva, Dzhokar’s aunt who now lives in Russia, is among family members who were angered at the defense’s strategy to admit guilt and who still believes in her nephew’s innocence. Photo credit: CTV

Because of threats, complaints and an increasingly bizarre media circus, family members of convicted Boston Marathon bomber Dzhokhar Tsarnaev were moved to an undisclosed location outside of the city—an ironic twist given that Tsarnaev’s trial, itself, was never given that same consideration.

Relatives tell WhoWhatWhy that members of Tsarnaev’s family traveled to Boston on April 24, but that group only included extended family from Zubeidat Tsarnaeva (Dzhokhar’s mother’s) side of the family. The Revere, MA Hampton Inn Hotel where they were staying was besieged with cancellations and complaints for hosting the family even though his parents weren’t among them.

The Boston press probably has spent more time hounding these family members than asking them questions about the glaring discrepancies in the case. They are trotting out their experts to opine about what they might testify to during the sentencing phase—rather than asking the family what they know about the Tsarnaev brothers, their opinions, their activities, or anything else that might explain why they feel they are innocent of any involvement in the bombings.

But Tsarnaev’s aunt, Maret, in an email, said it was her understanding that the defense did not plan for the relatives to testify, but court observers say at least some of them will testify on Monday. She said defense team members told her that “when jurors look at these relatives, they might find that some of them would remind them of their own uncle, or aunt, or a cousin, or… and that way, there can be a personal connection attached to it, and with that connection, the jurors might (go) easy on choosing the punishment for Dzhokhar.”

That’s optimistic thinking, at least if the jurors are anything like those commenting on various Boston media sites who liken the family members—many of whom have not seen Tsarnaev since he was a little boy—to monsters and moochers. One Twitter denizen even Tweeted out a map to the hotel and advocated for a “Punch-A-Tsarnaev-Day.” (This despite the reality that most people, faced with a relative accused of a crime of any sort, are inclined to give the relative the benefit of the doubt—and that we expect them to do that.)

As if it weren’t enough that the family was forced to change hotels after the leaks brought media, court observers Tweeted Friday that the family were wearing ankle monitors. The family members are here under subpoena; therefore, they are required to be in the country or face a contempt of court charge.

The family is in the protective custody of more than a dozen FBI agents and U.S. Marshals. but that, presumably, is because they have faced the vitriolic attacks mentioned in this article. There is no indication they are flight risks or have criminal records. One member is an elderly woman – possibly Tsarnaev’s maternal grandmother.

Immigration and Customs Enforcement has come under fire in the past several years for placing ankle monitors on foreign nationals, sparking lawsuits and outrage from human rights advocates; however, the practice has not subsided. There is very little – if any – information on the legality of placing these monitors on foreign nationals who are only here under subpoena and not to immigrate, but it would seem that this practice is somewhat over-the-top in this instance – particularly since the family is already under tight security.

Some Bostonians, including some of the surviving victims, are outraged that the defense paid for the trip out of their budget, which is funded by taxpayers.

“Why should our country pay for them when that family committed a violent act against our country? Not to mention, all of the free government services this family previously enjoyed on the backs of the taxpayers including government assistance and a free ride to UMass Dartmouth,” said victim Marc Fucarile in a statement to MyFox Boston. “In contrast, I was denied housing assistance I sought after the bombings, even though I needed a handicapped-accessible apartment, and my wife lost her job as a result of the events.”

While Fucarile may have a point about his own situation, the simple answer regarding the Tsarnaev relative importation, of course, is the US Constitution. The Sixth Amendment affords Tsarnaev a right to a fair trial—which includes the sentencing phase—and certain expenditures are warranted to ensure that happens.

Better Use of Taxpayers Money: Get the Facts

Dzhokhar Tsarnaev will either be sentenced to death or life without possibility of parole. But did he really do it? Or was he set up? Photo credit: United States Marshals Service / Wikimedia

But, Fucarile isn’t alone in questioning why the defense spent so much to bring these family members in for this phase of the trial.

A relative of Anzor Tsarnaev, father of the accused, also suggested the defense “stop wasting their taxpayers money” on the trip. That person argued the defense should have worked “on hard facts of the evidence at hand, that clearly showed Dzhokhar was not with a black backpack (as alleged in the indictment).

WhoWhatWhy has asked similar questions since the bombings occurred. We have mused about the backpacks, noted curious issues surrounding the killing of MIT Police Officer Sean Collier which sparked the strange Watertown shootout on the night of April 18, 2013, and about whether Dzhokhar’s brother and accomplice, Tamerlan, was an FBI informant, a double agent or connected to the Feds in some other way. We have pointed out sinkholes in witness testimony (here and here) and questioned voir dire.

Who was Tamerlan Tsarnaev? And who is Dzhokhar? What could the family tell us? Why have the press not tried to find out?  Why has the defense told the family to talk to no one?

Was overcoming the massive groupthink of the Boston media, the hoopla it provoked, and the resulting public fury too much for the defense?

Certainly the defense knew what they were up against when they tried four times to get the trial moved out of Boston. They even twice appealed rulings by trial Judge George A. O’Toole to keep it in the city. Each time, the defense pointed to new information about the community’s pre-trial certitude concerning his guilt, and noted that very few potential jurors had no connection to or opinion on the case.

They lost this bid and the trial started quickly—commencing several months faster than most death penalty cases.

In the end, Tsarnaev’s attorneys opted for an “it was him” defense and are working solely to save him from the death penalty. The defense rarely challenged the official narrative and limited cross examination to a handful of the prosecution’s witnesses.

And, when it came the defense’s turn to present its side, their witness list restricted testimony to those who could show their client played a lesser role in planning and executing the bombing. The jury took only 11 hours to return a conviction of Tsarnaev on all 30 counts—which is barely enough time to read the several-page verdict list and fill out the copious required forms.

The sentencing phase resumed April 27 at John Moakley Federal Courthouse with the defense making its case for life in a Supermax prison without possibility of parole. It’s doubtful whether many—or any—of the scores of important unanswered questions will be addressed while the defense is only focused on their strategy of portraying their client as under the sway of his older brother.