A group of newsboys on a stoop at 4th & Market streets in Wilmington, DE, May, 1910. Photo credit: Lewis Wickes Hine / LOC
Journalism & Media

The Local Journalism Act Is Just Pennies Thrown at the Past

The one line item in the Build Back Better bill that addresses the preservation of US democracy — through local journalism — is the legislative version of a toaster cozy. Congress’s Local Journalism Sustainability Act is functional, in its way, but about as forward-looking as a crocheted appliance diaper and just as useful when the entire kitchen is on fire.

So the problem with the act is twofold: It doesn’t do enough, and what it does do is in support of an outdated model that probably won’t speak to a new generation anyway.

Yes, but what nice cross-stitching!

If the bill passes, it’ll mean $1.67 billion in subsidies over the next five years for outlets covering local news. Small media companies with a majority of their audiences located within 200 miles of the converted garage that the outlet uses as a headquarters could see $25,000 in tax credits per reporter for the first year, and $15,000 for the remaining four. Exceptions include large outlets like The New York Times, though big chains that own local pubs — and hedge funds that own those chains — would qualify.

A line item spells it out: “Payroll credit for compensation of local news journalists (sunset 12/31/26).” These are tax credits, not subsidies, so while the act helps established outfits, it doesn’t do much to get new startups off the ground. And the money on offer is… not much.

For example, compare that $1.67 billion to the $2.5 billion allocated toward tree planting. (Trees are already getting a boost since fewer newspapers means less demand for that sweet, sweet pulp.)

After years of gushing money and staffers, they may even stabilize for a while. Especially if news organizations find other survival strategies, like becoming nonprofits or merging with other local media, as WNYC and Gothamist did in New York and KPCC and LAist did in California.

But none of this begins to address the vacuuming of ad revenue by Google and Facebook (now known as “Meta”). Pending antitrust cases may affect the flow of revenue to tech giants, though no one’s identified a realistic business model that steers that money, estimated a few years ago to be around $4.7 billion per year, back toward local journalism.

Nor does the bill address what happens in year six, when this limited largesse runs out. And as for re-upping the tax credit after it “sunsets,” that’s never a sure thing when the Republicans will surely control Congress again.

But why wait? Conservatives are already going after that line item.

It’s naive to believe that local journalists are obsessed with a secret agenda to sabotage Beltway Republicans when local politicians are venal enough to occupy their time — and require less travel, anyway.

Wall Street Journal editorials came dressed as the Republican fear that supporting local journalism is a partisan move, “a Democratic dole” and a “$1.7 billion subsidy for local journalists, most of whom are left of center.”

But these are issues the industry needs to work out for itself. Government strings inevitably follow government handouts, and the Fourth Estate must remain independent to do our job.

This idea is no way to “build journalism back better,” it’s a first step toward neutering the free press. 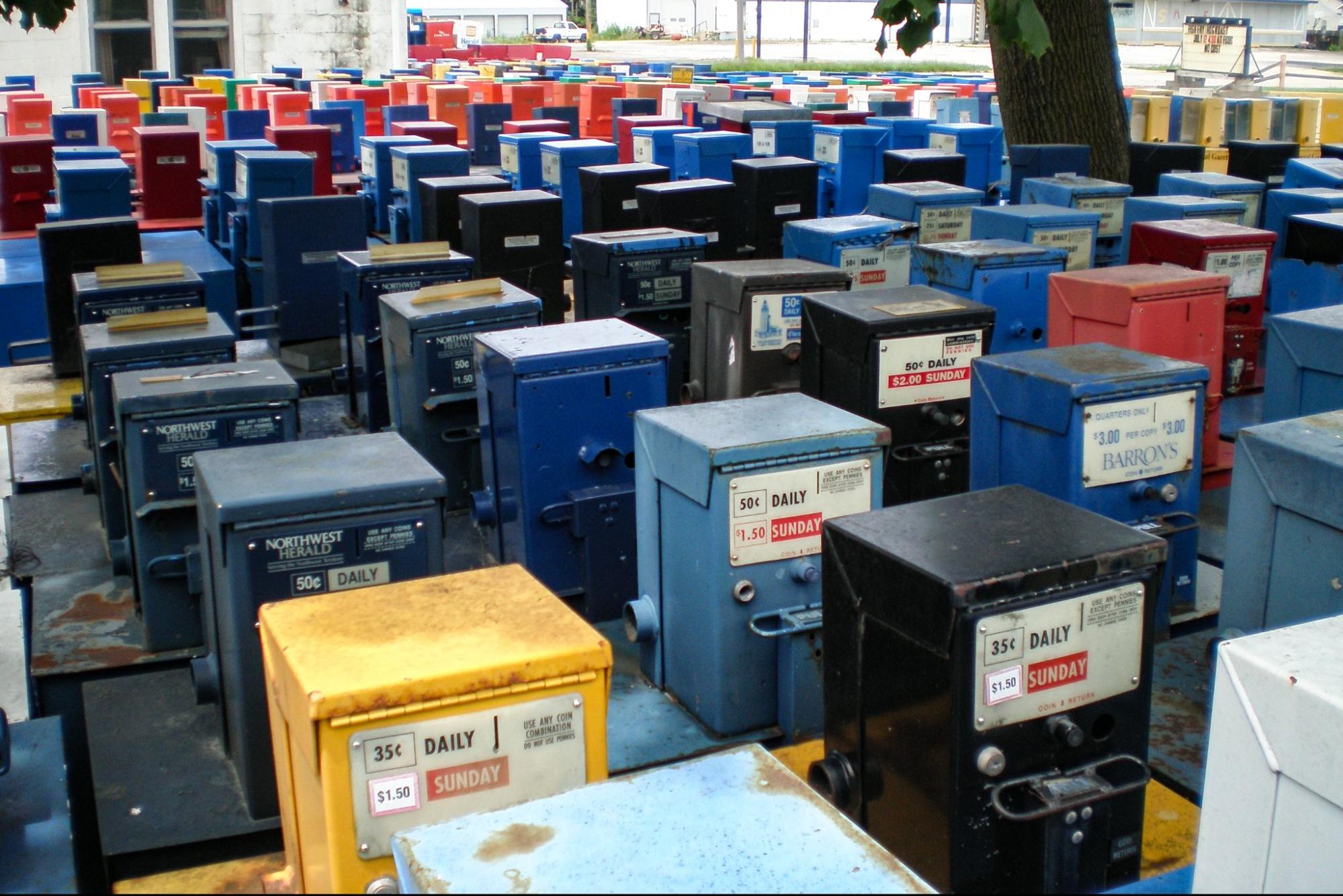 (That editorial didn’t bother to acknowledge that this “independence” ship has sailed, given that many news orgs received Payroll Protection Program loans during the Trump administration — which routinely encouraged Americans to give Fox their clicks and eyeballs until a more conservative option in the One America News Network appeared. That’s been nearly two years of the dole, and American journalism still seems to be haphazard and contradictory in its good old usual way. Which somewhat belies unified control by a deep state New World Order.)

It’s naive to believe that local journalists are obsessed with a secret agenda to sabotage Beltway Republicans when local politicians are venal enough to occupy their time — and require less travel, anyway.

It’s also foolish for Republicans, or Democrats, to believe that this bill will save local journalism. Every politician crows about the importance of democracy in their own partisan patois, but when it comes to incentivizing actual democracy-building at the local level through the time-tested means of local news, the best the Democrats can do is gesture proudly to their toaster cozy, even as the Republicans froth over how that red yarn for sure — for sure — betrays the socialist-Maoist toaster underneath that probably only toasts Critical Race Theory toast.

(The kitchen, by the way, is still very much on fire.)

And it’s naive for Republicans, or Democrats, or any of us, to believe that journalism can maintain its current form. Or that it even should.

Even if continued government support for local media is somehow assured, it doesn’t really say anything about the creation of new media outlets or innovative business models, class and racial inequities in journalism, or the news-consumption habits of Americans who came of age expecting a pinch-to-zoom relationship with their media. Behind that single journalism line item in the infrastructure bill is a sincere hope that the kids will embrace traditional legacy media in some kind of retro way, maybe like how they did with bucket hats, reruns of Friends, and mom jeans.

Mom jeans! The youth see some appeal in flat, boxy butts long forgotten by those who survived the trend the first time around. So too, Congress imagines a cohort of young people across the US rediscovering the quirky retro appeal and regional enlightenment of their local print newspaper.

You can see it, can’t you? Twenty-somethings in zoot suits and powdered wigs, sitting in bean bags at their local Orange Julius, broadsheets unfurled before them, hashing out the nuances of their city council’s latest vote or discussing the scandal involving the mayor and illegally trafficked Cabbage Patch Kids. These citizens will be wise, wonky, and engaged.

With the possible exception of Cabbage Patch Kids coming back as an alternative to Bitcoin, this all seems very unlikely. But that doesn’t mean journalism will go away. Only that it will adapt to a form that older generations of consumers and lawmakers may not at first recognize.

Some of the most exciting experiments in journalism are happening now, not in the written (or typed) word, but in the evolutionary bloom of podcasting, or on social media platforms like TikTok. (YouTube is still relevant, and makes money for a limited cadre of content creators, but already is starting to feel archaic.) Looking for a perfect solution here is bananas, too, I know. Who’s going to trust TikTok, or Google, or a podcasting hub like Spotify? Their interests may include journalism, but this is not an existential business concern for the tech giants.

But consider: Apple hosts more than 2.3 million podcasts. And they reach a generation that is not picking up the few papers that are left. More than half of people aged 12 to 34 listen to podcasts.

Probably 45 percent of those podcasts are true-crime shows hosted by cats, but the point is: The energy is there. And it’s significant.

But because a podcast — or a TikTokker doing a tap dance to the day’s news — doesn’t fit a traditional idea of journalism, it’s not eligible for even a measly tax credit. It’s hard to imagine how that would even work. The plug and the outlet aren’t compatible yet. Like taking your phone charger to Europe.

Yet the purpose of local journalism will continue to be objectively important as a means of uncovering corruption, holding authority accountable, elevating unheard voices, creating and maintaining social bonds, and so on. Legacy journalism is, to a certain degree, adapting to these new forms: The New York Times has a podcast, Yahoo News is on TikTok. But the institution also needs to find ways to extend the ethos and skill set of journalism to a younger generation. And our leaders need to recognize that if they’re going to spend not-enough money on journalism, they should at least spend not-enough money on its future.

The journalism tax credit is good, but not nearly good enough, and the satisfied back-patting obscures the fact that none of this really matters long term. The real future of journalism is much weirder, and it’s still inchoate, and it’s slouching towards Orange Julius to be born.