Biden Wants to Break Up Big Companies. Will the Courts Stop Him?

When President Joe Biden nominated 32-year-old Lina Khan to head the Federal Trade Commission in June, both Republican and Democratic lawmakers heralded the appointment of the influential critic of monopoly power as the beginning of a new, tough-on-big-business era of antitrust enforcement.

But less than two weeks later, an Obama-appointed judge delivered a setback, when he ruled that the FTC’s ongoing effort to break up social media giant Facebook had failed to prove the company was an illegal monopoly.

The FTC filed a revised complaint in August, and experts expect the case to go to trial in what is just the beginning  of a much larger fight between government and so-called corporate monopolies — especially those in Silicon Valley.

But in this square-off between Big Tech and the state, the federal government’s regulatory power may be checked by the courts, which for the past 40 years have consistently come down in favor of firms in monopoly cases.

If the FTC brings strong antitrust cases but loses in the courts, the onus will be on Congress to update century-old antitrust law to make it easier to police big business.

A New Direction For Antitrust 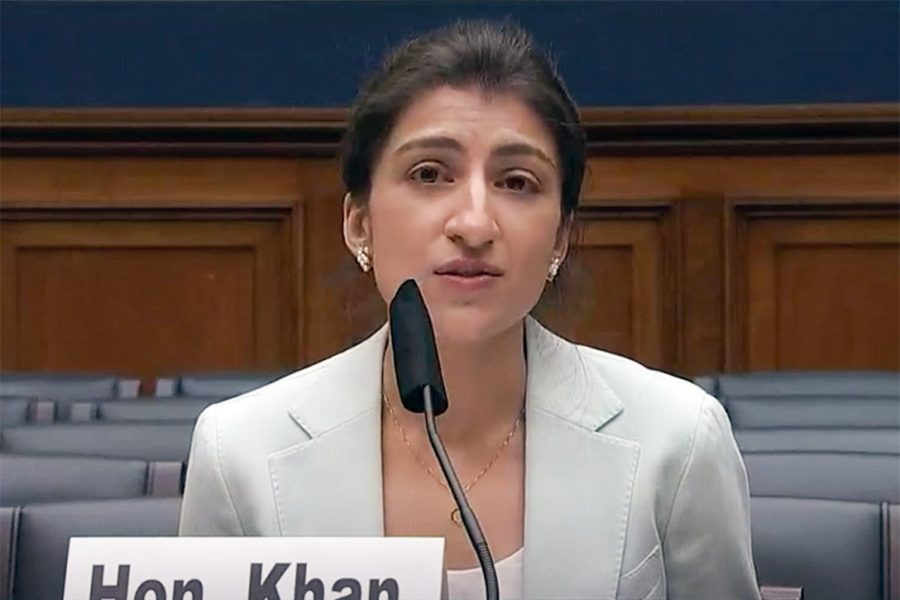 Khan first made waves in 2017 when, as a law school student, she published a paper titled “Amazon’s Antitrust Paradox.” In a challenge to decades of established antitrust thinking, Khan argued against the “consumer welfare” approach, which accepts monopolies so long as they deliver low prices for consumers. In her analysis, low prices do not offset the harm monopolies can cause small businesses, workers, communities, and suppliers.

Observers say the appointment of Khan and other advocates for breaking up Facebook signals the Biden administration’s tougher stance against the Big Tech companies that benefited from a laissez-faire approach to Silicon Valley during the Obama and Trump years.

And for many, Monday’s hours-long Facebook outage, which disrupted the lives of the billions of people worldwide who rely on Facebook properties like Messenger and WhatsApp for basic communication, was yet another demonstration that the company is too big and wields too much power.

There’s broad support for this new approach. Lawmakers in both parties and a majority of the American public believe that Big Tech companies have too much power, and breaking them up — in the way that past monopolies on oil and telephone services have been split — is wildly popular with voters of all stripes.

Khan’s appointment to the FTC has generated buzz among people who work in the field of antitrust, said John Newman, a law professor at the University of Miami who focuses on competition and antitrust.

But, “It’s early days,” he cautioned.

Khan and her fellow appointees are bringing new ideas, which is a good thing, but it’s too soon to predict how successful they’ll be, he said. And they are still up against a decades-long winning streak for firms accused of monopoly behavior.

In the 1970s, a group of conservative scholars, led by future Supreme Court nominee Robert Bork, popularized the consumer welfare approach to antitrust, which directs courts to leave monopolies unchecked as long as they keep prices low.

Ever since, courts have been more “skeptical” of legal claims invoking antitrust law, said Randy Stutz, vice president of legal advocacy at the American Trust Institute, a nonprofit that researches and advocates for increased competition and antitrust enforcement.

“There is a tremendous amount of caution about overreach baked into the case law,” Stutz said. “I would say excessive caution.”

In practice, this has meant courts have given firms significant freedom to set prices and pursue mergers. And corporate defendants almost always win when antitrust cases are brought against them. 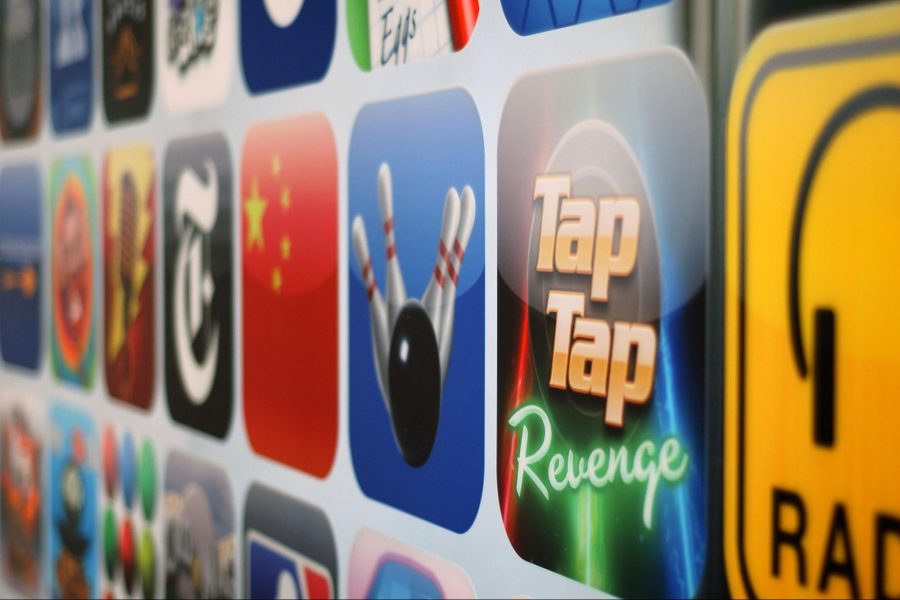 In September, a US District court judge issued a mixed ruling in Epic Games vs. Apple, in which the Fortnite-maker alleged that Apple’s operation of its app store violated antitrust law.

The judge told Apple that app developers can use other payment methods in order to sidestep Apple’s 30 percent commission fee. But the judge upheld that Apple does not have a monopoly in the “digital mobile gaming transactions” market — ultimately, a win for Apple.

In that case, the federal government and 17 states accused American Express — one of the four largest American credit card companies — of “unreasonably restraining trade” with its “anti-steering provisions,” which prohibit merchants from encouraging customers to use competing credit cards with lower transaction fees.

A lower court agreed, but on appeal, the Supreme Court’s conservative bloc, with Justice Anthony Kennedy as the swing vote, ruled 5-4 in AmEx’s favor.

In the majority opinion written by Justice Clarence Thomas, the court also accepted the Second Circuit’s definition of the credit card market as a “two-sided market,” an arrangement where buyers and sellers meet on an intermediary platform.

Because both credit card companies and credit card holders benefit when cards are widely accepted, AmEx’s behavior did not stifle competition, the court ruled.

“Two-sided” markets are common in tech. Amazon, eBay, and Uber are all considered two-sided markets.

If Ohio v. American Express becomes the blueprint for assessing antitrust issues involving two-sided markets, “it will deal a big blow to federal antitrust enforcement,” says Doug Melamed, a professor of law at Stanford Law School and antitrust expert. Whether that case becomes precedent in Silicon Valley cases remains to be seen.

Against this backdrop, the FTC is hoping to break up Facebook. At the core of the FTC’s case are allegations that the social network undertook a “buy-or-bury” scheme to secure its monopoly by purchasing competitors like Instagram and Whatsapp instead of innovating.

Under the Sherman Act, an 1890 law that is still one of the federal government’s main prohibitions on monopolies, a monopoly is illegal if it’s obtained via anticompetitive methods, such as swallowing up the competition.

The FTC’s complaint calls out founder and CEO Mark Zuckerberg specifically, painting him as a power hungry leader determined to secure Facebook’s dominance at all costs. “It is better to buy than compete,” as he said in a 2008 internal email.

The complaint outlines how Zuckerberg stuck to this reasoning when Facebook struggled to maintain dominance after the widespread adoption of smartphones in 2010. According to the FTC, Facebook had the opportunity to adapt to mobile during this time, but failed, and bought out smaller companies instead.

The federal judge who dismissed the original complaint against Facebook in June said the FTC had not adequately defined the market in which the company enjoys a monopoly.

The new complaint makes a bolstered case for why Facebook has dominant control in the US “personal social networking market.”

If successful, the FTC’s case could force Facebook to spin off both WhatsApp and Instagram into separate firms.

Newman believes the case will go to trial. “I think it’s well drafted, it tells a clear story,” he said.

In a response filed Monday, Facebook said the FTC had once again failed to establish Facebook’s monopoly power, and asked for the case to be dismissed.

Facebook also argued that for a second time Khan must recuse herself from her position at the FTC, saying that her “prejudgment of Facebook’s liability required her recusal.”

Facebook argues that Khan’s public statements and past antitrust work, including with the House Subcommittee on Antitrust, “reveal that Chair Khan has an ‘axe to grind’ against the company.”

“I wouldn’t be shocked if none of these bills pass,” Weinstein said, pointing to opposition among both Democrats and Republicans.

The pressure is not only on the FTC to bring its case and win. There’s also pressure on Congress to change antitrust laws — adapting century-old laws to fit the age of Big Tech — to make cases easier for regulators to argue.

“If it turns out that defendants win all these cases, I don’t see that as a loss for Biden, I see that as more pressure on the Hill to pass legislation,” said Sam Weinstein, a professor at Cardozo School of Law in New York City who focuses on antitrust. “Every time the tech companies win, it’s more pressure to change the laws.”

Lawmakers acknowledge the urgency around helping the FTC litigate cases. The day that the FTC’s original complaint was rejected in court, Sen. Amy Klobuchar (D-MN) tweeted, “The FTC should do everything it can to pursue its case against Facebook. But the ruling shows why our antitrust laws need to be updated after years of bad precedent. We can’t meet the challenges of the modern digital economy with pared down agencies & limited legal tools.”

In June, lawmakers in the House Judiciary Committee introduced 5 bipartisan bills that would impose regulations on the “big four” — Apple, Google, Facebook, and Amazon. If passed, regulators would be empowered to block certain acquisitions and companies would have to pay increased filing fees during mergers. Thirty-two state attorneys general wrote a letter to Congressional leaders endorsing the bills. 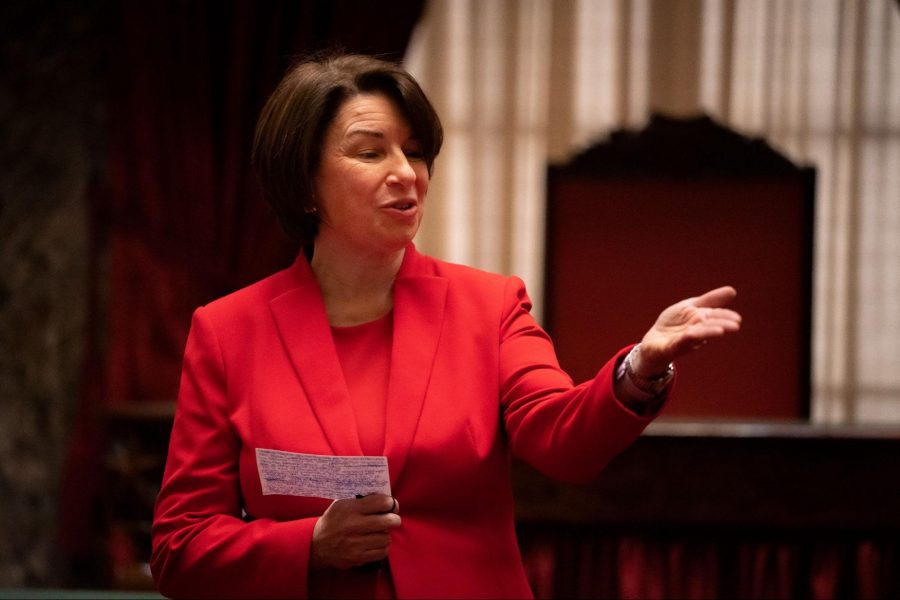 Democratic Sen. Amy Klobuchar is one of a growing chorus of lawmakers who believe Big Tech has too much power. Photo credit: Chairman of the Joint Chiefs of Staff / Flickr (CC BY 2.0)

On the Senate side, Klobuchar’s Competition and Antitrust Law Enforcement Reform Act would change the legal standards around antitrust and give the FTC and Department of Justice increased powers of enforcement.

In September, House Democrats proposed an additional $1 billion for the FTC in the $3.5 trillion social spending reconciliation bill. The money would go towards creating a new division of the FTC that would deal with privacy violations. It’s unclear whether the proposed funding will make it into the final legislation, with the final bill still in limbo.

But even though Congress has the political will to take on large monopolies, there’s reason to be skeptical about the state’s ability to curb corporate power.

The bills released in June by the House Judiciary Committee that deal with tech-specific aspects of antitrust may not deliver, simply because it is hard to write antitrust law, wrote Matt Stoller, the director of research at the American Economic Liberties Project, a nonprofit dedicated to dismantling concentrated economic power,

“Competition law is complex and warped to make drafting full of legal minefields, so without extreme care in the language, the law will likely be subverted,” he wrote.

But the fact the bills were introduced at all — “the first real Congressional attack on concentrated corporate power since the Bank Holding Company Act Amendments of 1970” — is hugely significant, he wrote.

Yet despite bipartisan support for curbing Silicon Valley’s power, there is no consensus in Congress on the issue.

“I wouldn’t be shocked if none of these bills pass,” Weinstein said, pointing to opposition among both Democrats and Republicans.

Republicans like Sens. Josh Hawley (MO) and Mike Lee (UT) support greater antitrust enforcement, but other high profile Republicans, including House Minority Leader Kevin McCarthy and Rep. Jim Jordan (OH) are against the measures, in part because they would empower the government to further oversee business.

Among Democrats, Reps. Zoe Lofgren and Eric Swalwell, both of whom represent California districts with tech companies and tech workers, have also voiced concerns about the bills’ details, although they say they are generally in favor of further regulation.

Whether or not Congress will be able to pass legislation to help the FTC is unclear, but “one thing is clear,” says the American Antitrust Insitute’s Stutz.

“If there’s a strong antitrust case [against Facebook] and it fails,” he said, “that won’t be acceptable to a large segment of the public.”