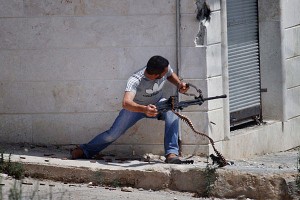 The Hijacking of Arab Spring, and the Media’s Complicity For those versed in the black arts of propaganda, the hijacking of Arab Spring must be a beauteous thing to behold.

First came evidently spontaneous uprisings in Tunisia and Egypt. Then some up-and-comer in Washington or London or Paris had a brainstorm, a new twist on a very old idea: if you can’t beat em, join em. Or even better, co-opt them, and use them for your own purposes.

The old way of getting rid of “inconvenient” leaders was so 20th-century—in the case of Saddam Hussein, a monstrous lie followed by a massive bloodletting on both sides. Tahrir Square suggested how to bring down a regime in a manner far less costly and far more palatable to the public: lots of medium-sized and little lies, war through Twitter, war through expendable proxies. Provide financial incentives to key figures to publicly renounce the old leadership, create a steady stream of heart-rending moments and photos and allegations, generate endless “human rights violations” by baiting the government into a military response, then very publicly petition international bodies for redress of humanitarian concerns.

Muammar Qaddafi, a fiercely independent, quasi-socialistic African transnationalist, was the guinea pig. A brilliant disinformation campaign isolated him, authentic domestic grievances were encouraged, and a whole war was conducted on behalf of the West with nary a Western soldier putting boots to ground.

Next up: Syria’s Bashar al-Assad. So began, again, the covert arming of real domestic opponents, and an extensive and variegated propaganda campaign.

As with Libya, Western countries were covertly overthrowing a Middle East regime, just as they have done over the decades. And, as before, the media said not a word about what was really going on. So the public did not really understand, and there was practically no debate at all.

A Diverse Media, But a Single Message

Thanks to the Internet, we have what appears to be a more diverse range of media offerings than ever before. We know the corporate-owned American media won’t take any kind of risks to warn us about what is going on. We are lucky we have alternatives: easy access to high quality foreign media (BBC, Guardian, Al Jazeera and the like). And we have a plethora of “alternative” media, from Left to Right to Other.

With this cornucopia of competing entities, we have every reason to expect that we will get good, hard-hitting, tough-minded reporting and analysis. Right? Wrong. Almost no news organization of any note, of any kind, has called Libya and Syria for what they really are.

The reasons may be various, but perhaps the most decisive one is this: All have seemingly fallen victim to a superb propaganda strategy that associates critical reporting and critical thinking on Syria with defending a regime (that is of course dictatorial and brutal) against “the people.”

When almost no media anymore question these barely disguised coups against uncooperative standing governments, we are in very deep trouble. Because if we can’t count on the media to tell us what is going on in far-off places, what may we expect of them closer to home?  We are witnessing a crisis for journalism that is nothing less than a crisis for democracy itself.

Yet one more example of how this debilitating game is played was on display the other day in the New York Times, just one of many news organizations that have essentially acquiesced in this sophisticated Western power propaganda operation.

The paper, whose reporting on Syria has been lackluster at best, finally provided us with a peek at what is actually going on. But the revelations were spun so as to benefit those seeking to depose Assad—and bury the matter of foreign sponsorship in plain sight.

The Times piece, under the headline, “C.I.A. Said to Aid in Steering Arms to Syrian Opposition,” begins:

A small number of C.I.A. officers are operating secretly in southern Turkey, helping allies decide which Syrian opposition fighters across the border will receive arms to fight the Syrian government, according to American officials and Arab intelligence officers.

Let’s stop and consider what is being said here. If the CIA is “operating secretly,” then what are “American officials and Arab intelligence officers” doing publicizing their efforts? Are these leakers courageous whistleblowers, risking a nice visit to the Bradley Manning Hall of Detention? Don’t bet on it.

The reason we are being told about this, in all likelihood, is that they want us to know. Why? Because this is, in spy jargon, a “limited hangout” that hides the real truth. By “leaking” potentially controversial material, they get ahead of the curve, and by framing it in the most benign possible way, they control any discussion. Read on, please:

The C.I.A. officers have been in southern Turkey for several weeks, in part to help keep weapons out of the hands of fighters allied with Al Qaeda or other terrorist groups, one senior American official said. The Obama administration has said it is not providing arms to the rebels, but it has also acknowledged that Syria’s neighbors would do so.

So there’s another soft spin: covert American operatives are helping keep weapons “out of the hands” of terrorist groups. Or, to be precise, out of the hands of terrorist groups opposed to American interests, while channeling them to terrorist groups more amenable to our policies in that region. The identity of these friendly “opposition fighters” is not stated, but they are presumably groups the CIA approves of—  perhaps because they were originally created or at least co-opted by these very same CIA people. Of course, the history of Western support for selected terrorist groups in this region is not encouraging; recall the extensive CIA funding of anti-Soviet mujahedeen who morphed into anti-American fighters (including Taliban and Al-Qaeda) after the Soviet occupation of Afghanistan ended in 1989.

The Times article goes on to say that the US is not providing arms but that US allies—particularly Turkey, Saudi Arabia, and Qatar—are. What it neglects to mention is that the US provides arms to these allies, and all but tells these countries what to do with those arms. The trick: Washington uses these intermediaries in order for the US to say that it is not involved in overthrowing the Assad regime.

That’s why the US government can hypocritically chastise Russia for sending in helicopters to the beleaguered Assad government. Perhaps Russia should, Western-style, simply look the other way (wink, wink) while its own allies send in weapons? Unfortunately for Russia, it is increasingly isolated, and, since the end of the Soviet bloc, has nothing comparable to the Western alliance. All it can do is provide direct aid to the regime and raise objections at the UN to those arming the opposition.

The fact that the United States government, and notably a Democratic administration, is waging war against another government through surrogates is a really, really big deal. Yet our media—almost all of it, Left, Right and Other—walks in lockstep with a shared dubious narrative of an essentially spontaneous uprising being crushed by a ruthless government and of a West helping “the people” purely for humanitarian purposes.

It turns out that the US government really did learn a lesson from Vietnam. Win those hearts and minds. But not in foreign jungles or deserts. The real battle is right here at home.