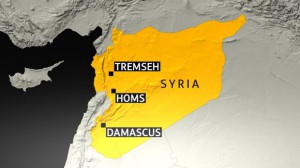 Syria, The Movie: Monsters and Defectors There’s an underlying problem with reporting about Syria: The media continue to treat as human rights violations what is actually authority clamping down on people it considers, rightfully or not, revolutionaries or terrorists.

You might disagree with that government. You might find that government repressive, even odious, and want those involved in the uprising to succeed. But to call yourself reasonably objective you would have to admit that all governments respond with force when their survival is threatened. And, because they have the army and its might, they use it. It’s nasty, and a lot of people die.

Any regime considers itself authorized to do whatever it takes to put down insurrection. And when foreign powers are helping the uprising, the regime believes it has even greater cause for muscular action.

That’s the basic issue in Syria. Yet, because the West, which wants the Assad regime gone, does not have a policy of generally supporting uprisings against authoritarian, repressive regimes (see Saudi Arabia, or Bahrain) it cannot invoke that argument.

Instead, to justify intervention, it must make its case by presenting a growing litany of increasingly egregious human rights violations, being visited upon the people for no reason beyond an inherent monstrousness. That’s basically the only valid basis for ousting Assad.

Thus, the playbook of “psychological operations” requires that monstrousness be on constant and increasingly vivid display.

One of several such stories concerned the massacres at Houla, which as we previously pointed out have turned out to be murky, without hard evidence that the Assad regime was responsible.

A few days ago, we heard of new atrocities by Assad’s government. This time, in the village of Tremseh, near the city of Hama, the alleged numbers topped a previously “most grotesque” scenario, and therefore got top billing.

However, now there are doubts about the accuracy of that story—but how many people will remember the original, graphic and horrible account, and how many will fully absorb the more nuanced correction?

Here’s the original story in the New York Times:

Syrian opposition activists said more than 200 people were killed in a Sunni village on Thursday by government forces using tanks and helicopters, which, if confirmed, would be the worst in a series of massacres that have convulsed Syria’s increasingly sectarian uprising against President Bashar al-Assad.

The Syrian government also reported a mass killing in the village but said it was committed by armed terrorist groups, the official description for Mr. Assad’s opponents. It said at least 50 people were killed.

And here’s the Times’ more recent one:

New details emerging Saturday about what local Syrian activists called a massacre of civilians near the central city of Hama indicated that it was more likely an uneven clash between the heavily armed Syrian military and local fighters bearing light weapons.

There were also new questions about the death toll, with initial figures from activists of more than 160 and other reports putting the toll at more than 200. The Syrian Observatory for Human Rights, an opposition group based in Britain that has a network of contacts in Syria, said that it had been able to confirm only 103 names, and 90 percent of them were young men. There were no women’s names on the list of 103 victims obtained from activists in Homs.

After the high toll was announced from Tremseh, as was the case with Houla and other similar episodes, Western leaders lined up to condemn the mass killings of civilians. Col. Riad al-Assad, based in Turkey as the ostensible leader of the loose coalition of fighters called the Free Syrian Army, told the Arabic television network Al Jazeera on Thursday that there had been no opposition fighters in the town.

Although what actually happened in Tremseh remains murky, the evidence available suggested that events on Thursday more closely followed the Syrian government account.

“Mohammed” For the New York Times

In the original article The Times had noted, almost in passing, that the UN Security Council was due to meet and that harsh sanctions against Syria were in play.

Much more attention was focused, of course, on the alleged atrocities by the Assad regime. Among witnesses, the paper quoted a local man, identified only by his first name, whom it reached by telephone:

Mohammed doesn’t seem to really have any information himself, beyond the apparent cause of death. He says that the Assad side is responsible, based on logic. “Why would we want to kill our own people?”

By the same token, why would Assad commit atrocities of this sort just as the Security Council prepares to meet?

These things are complicated. There’s a long history of brutal murders of civilians by militias loyal to governments. But there is also a long history of employing provocations to justify interventions—including putting your people into the uniforms of the opposition—and even tolerating the killing of innocent people if it will advance the cause.

See, for example, Operation Northwoods, proposals that the United States attack itself and blame it on Cuba. There are many other such examples. We know that JFK vetoed Northwoods. We do not know that all presidents have rejected such proposed schemes. And if the US Joint Chiefs of Staff could consider it worthwhile to perpetrate terrorist attacks on American citizens, with  expected innocent deaths, why would it be impossible that the reverse could happen in Syria?

We don’t know the answer. But we should at least be asking these questions.

As for the reporting, when the New York Times interviews a person only identified as “Mohammed” who we are told lives in the town, we should be told more. How did the paper settle on this person? Where did it find his phone number? Did someone provide it? What about other residents? Did it try to reach others and fail? And what more about Mohammed? Where was he when the killings took place? How does he know who did the killing? Etc. We need a lot more detail—and much of it can be provided to us by two steps:

1.  Ask  more and better questions of sources
2.  Be more transparent with the public on how your news organization gets its information

“Come Out With Your Hands Up”

If the “see the evil” story is a staple of psychological warfare, another old standby is the “everyone hates them” story. We’ve had a bunch of stories recently about Assad loyalists bailing out. One was a general, one was an ambassador. Now we have someone from the field.

“In Fleeing Pilot, Hints of Trouble for Syria’s Assad” is the latest of what are generally sympathetic accounts concerning defectors.  The message is obvious: Assad’s power is crumbling.

Such messages are effective. But they leave out one thing: People defect for many reasons, not always just for honorable purposes. Sometimes they read the writing on the wall. And money or the promise of compensation is frequently in play but of course rarely acknowledged.

Still, these defection stories often work, because at some point you hit critical mass, and then everyone scrambles out.

Spreading word of defections is crucial. And not just for people in Syria. The more the world can be convinced that Assad is getting weaker, the more everyone is likely to jump onto the winning team. And with the Security Council under pressure to act, how surprising can this raft of defection reports be?

Psychological operations to win over the public are an essential part of warfare. Because the United States and its allies are much more experienced and sophisticated in such things, and because they can count on the lion’s share of the media to go along without much resistance, it is an uneven match.