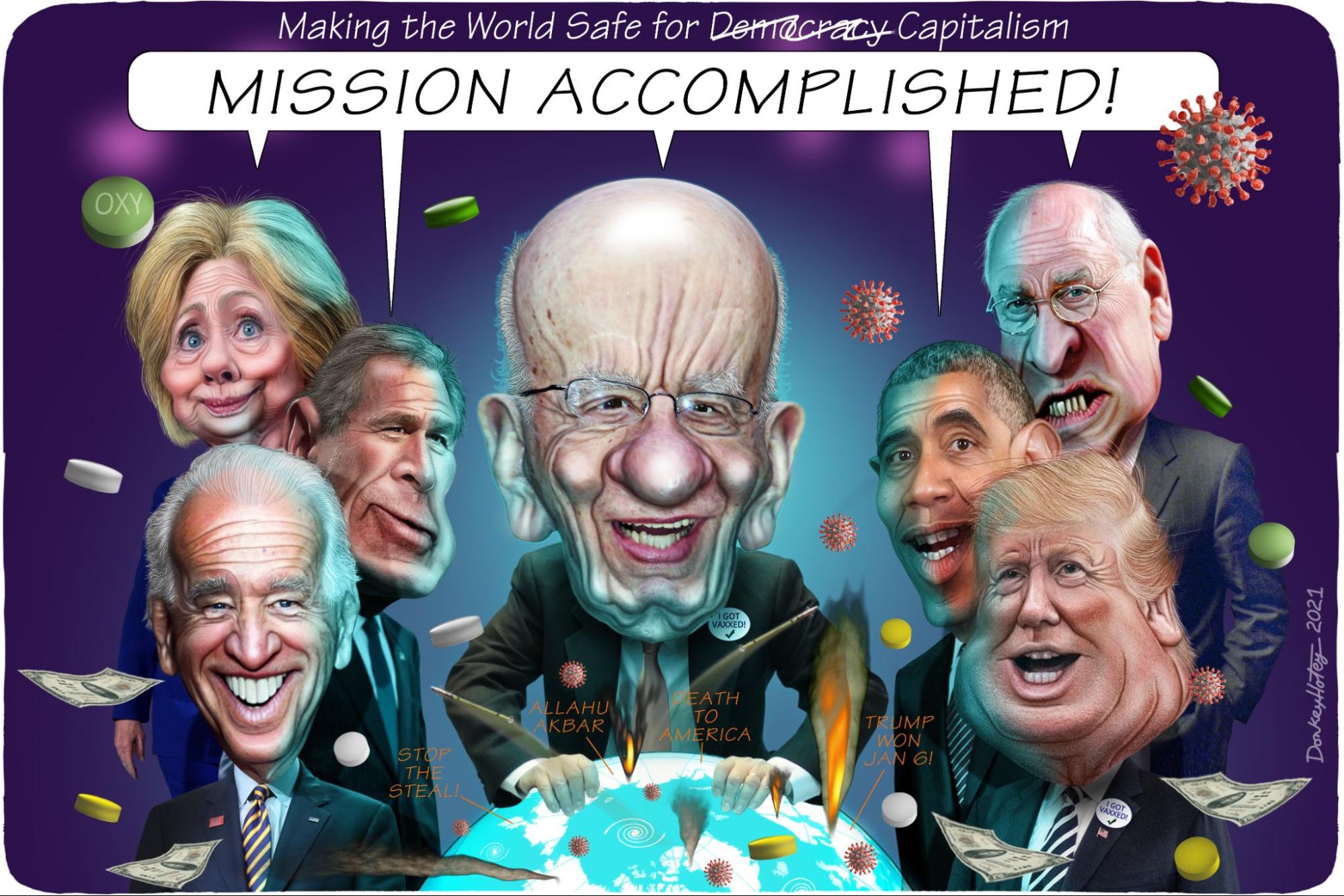 Too Big to Jail: The Death of Accountability

Those who are profiting from death, suffering, and injustice have learned a valuable lesson as the world deals with various emergencies — many of which they helped create or made worse: No matter what they do, nobody is going to hold them accountable for their actions in a meaningful way.

Whether it’s the current situation in Afghanistan, the coronavirus pandemic, global warming, the opioid crisis, or the Big Lie and the January 6 insurrection (just to name a few), those primarily responsible for these crises get to walk away unscathed after leaving behind a trail of destruction.

At the same time, a bunch of poor schmucks are bearing the brunt of the consequences — which often means that they are paying with their lives.

Afghanistan is a great example. If you turn on any news show to see how the current debacle is unfolding, you can watch the same people weighing in who plunged and kept the US in an unwinnable conflict for 20 years.

They are part of a small but extremely powerful group of people that includes presidents, cabinet members, generals, military contractors, and hawkish pundits.

It’s amazing that any outlet would want to have somebody on the air who has been so wrong about something for so long. However, it makes a lot more sense once you know how cliquish Washington is. The hosts of the shows go to the same cocktail parties as the guests, so they will keep inviting them on and won’t rock the boat by asking tough questions.

None of them has been held to account for their part in this disaster, and that includes the many people in the media who were advocating for war because it’s good business.

In the meantime, scores of Americans (and many more Afghans) are dead, countless others are injured, and an entire new generation of current and former soldiers has to deal with PTSD. If history is any guide, even those members of the military who seem to be doing OK will kill themselves at a high rate for decades to come.

In addition, there are millions of new refugees that other nations have to deal with at their own expense — and the threat of domestic destabilization — while the US walks away… because the concept of never being held to account doesn’t just apply to US elites but also to the country itself.

This is by design, of course. There is a reason why the United States is so opposed to an international criminal court (and does not recognize its jurisdiction). It could, after all, be used to bring US leaders to justice, and they can’t have that.

And now we’re back to square one in Afghanistan… just a few trillion dollars lighter. This money found its way into the pockets of US and Afghan warlords. The only real difference between the two is that American warlords are called “defense contractors,” and their Afghan counterparts don’t lobby Congress to ensure they can escape any type of scrutiny and consequences for their misdeeds.

It certainly seems as though the people responsible for this mess should be held accountable in some way.

For example, it would be great if the families of dead soldiers could sue those who made the decision to go to war — if only to put them under oath to try to bring to light the many lies they told to rally support for these pointless conflicts.

Afghanistan is just one example.

The opioid crisis, which kills tens of thousands of Americans each year, is another. Earlier this month, a member of the Sackler family, which owns the company that makes OxyContin and played a big part in getting America addicted to painkillers, said the clan would only contribute billions of dollars to a legal settlement in return for future immunity from lawsuits.

Imagine average Americans trying this tactic when paying a ticket: “Officer, I’ll pay the fine if I get to speed later without fear of punishment.” Good luck with that.

This example also illustrates that fines and similar penalties are completely meaningless for people who have an endless supply of money. In this case, the company (Purdue Pharma) filed for bankruptcy, which halted the lawsuits.

There is a proposed reorganization under which the Sacklers would give up ownership of the company and pay $4.5 billion over time to help victims of the opioid crisis.

That sounds like a lot until you consider that the family has more than twice as much stashed away right now. So what exactly is the punishment here? That the ninth yacht of the Sacklers will have to be a bit smaller?

How does that stand in any relation to the heartache experienced by the tens of thousands of families who have lost loved ones to the addictive painkillers Purdue Pharma pushed?

Some semblance of justice might be achieved if moguls like the Sacklers couldn’t use bankruptcy laws to evade responsibility. The so-called “Sackler Act,” which would ensure precisely that, has been introduced in Congress… and likely won’t go anywhere because big business is lobbying against it to evade accountability.

It goes without saying that individuals dealing OxyContin on a small scale face more jail time than any Sackler ever will.

This is a common theme. For example, those ultimately responsible for the Big Lie and the January 6 insurrection will escape any punishment. In the meantime, the gullible idiots who believed their nonsense are going to jail. They obviously should, but are they more culpable than the people who encouraged them to disrupt the peaceful transition of power by telling them it is their patriotic duty to attack the seat of the US government? There is a reason why the Nuremberg trials focused on the Nazi bigwigs giving the orders and not the privates who followed them.

And don’t get us started on the discrepancy between lawmakers who are intentionally destroying democracy with voter suppression legislation and similar laws while individuals who unwittingly cast a ballot while on probation are being prosecuted to the fullest extent of the law and face years in prison.

Then there is climate change. For decades, fossil fuel companies have knowingly made the planet less habitable for us all. And, instead of warning everybody, they spent untold millions on muddying the findings of the scientific community in order to keep making money. Their punishment? Billions in government subsidies annually.

That’s not even the worst of it; just because they happen to be sitting on vast reserves of the oil that is polluting our planet, entire countries in the Middle East have been getting away with atrocities and human rights violations.

Finally, there is the current coronavirus pandemic, which is a perfect illustration of what happens when greedy, ill-intentioned people with no fear of reprisal pursue their own agenda with zero regard for anybody else.

From Republican governors positioning themselves for a run for president, such as Ron DeSantis (FL) and Kristi Noem (SD), to Facebook, which is making lots of money from misinformation posts and videos, to Fox News, which is churning out that content on a daily basis, there are many actors in politics, business, and the media who are trying to benefit from killing people.

And they are doing so while protecting themselves from the virus. For example, when Texas Gov. Greg Abbott (R) tested positive for COVID-19 earlier this month, his office not only noted that he is fully vaccinated but also that he received Regeneron’s monoclonal antibody treatment even though he experienced no symptoms.

Obviously, he should be fully vaccinated, and it’s great that more Americans can get this treatment, but Abbott is optimally protecting himself from COVID-19 while spearheading policies on mask-wearing and vaccinations that leave other Texans vulnerable.

He is not alone in this blatant hypocrisy. The worst offender may be Fox News, whose primetime demagogues tirelessly spread doubt about the efficacy of vaccines, call for civil disobedience against mask mandates, and rail against “vaccine passports.”

But the network founded by Rupert Murdoch, who was among the first in the world to get the vaccine, does not practice what its stars preach. A memo from earlier this month shows that Fox mandates masks in certain places and for unvaccinated staff, and wants all of its employees to upload their vaccination status.

Clearly, Fox News does not care if its viewers are as well protected as its employees… presumably because providing disinformation to an audience distrustful of the government is good business — even if it kills many of those viewers.

Say what you want about the slew of conservative radio hosts who have died from COVID-19 — unlike their compatriots, they at least put their money (i.e., their opposition to getting vaccinated) where their mouth is.

In that way, the coronavirus is different because it does deliver swift accountability in the form of hospitalization and death. Unfortunately, those who would rather take horse-deworming medicine than get an FDA-approved vaccine do not just endanger themselves, but also those around them.

Obviously, political and business leaders have to make tough decisions all the time, and they shouldn’t face harsh penalties every time they get one wrong… as long as they are acting in good faith.

Good faith, however, is something that is lacking from all of these examples.

US leaders knew their Afghanistan campaign was doomed and that they killed countless innocent civilians. They also knew the “intelligence” leading up to the Iraq war was worthless. But they kept that information from the American people in order to pursue military campaigns that were doomed to fail and caused great suffering in the US and abroad — while boosting the bottom line of defense contractors.

There is no way the Sacklers didn’t know that their relentless campaign to get doctors to overprescribe OxyContin was doing great harm to communities throughout the US. And yet they pushed ahead.

The fossil fuel companies have known for a long time what their products do to our climate but recklessly continued to sell them without searching for safer alternatives.

Those pushing the Big Lie know that Donald Trump lost decisively, but they have also realized that it is a useful tool to aid them in their efforts to win elections by undermining democracy.

And everybody questioning masks and vaccinations for the sake of ratings and votes — from Fox News executives and hosts to Republican governors — know that their rhetoric is killing people who believe them.

While the first thing all of the above have in common is infuriating, the second is highly discouraging: They are all getting away with it.

And, unless Americans band together to demand accountability, that’s not going to change any time soon.