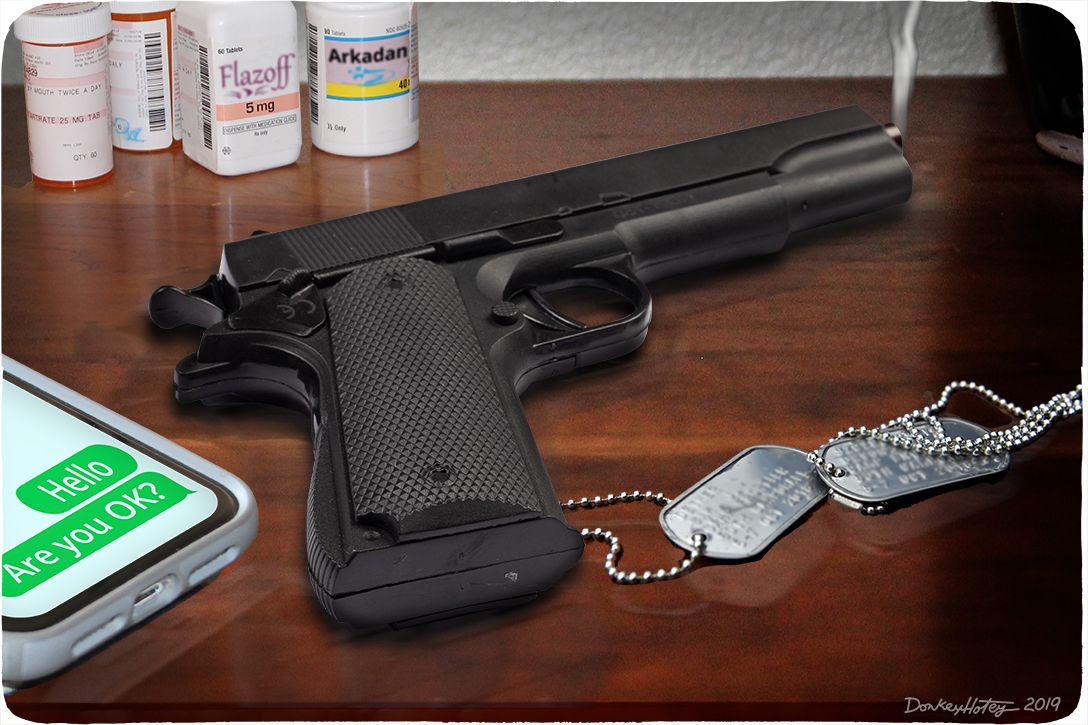 If you are a veteran or know a veteran who may be contemplating suicide, please call the National Suicide Prevention Lifeline at 1-800-273-8255. Photo credit: DonkeyHotey / WhoWhatWhy (CC BY-SA 2.0) See complete attribution below.
Cartoon Government Integrity Opinion

Some of the Deepest Wounds of Veterans Go Undetected

When President Donald Trump announced the death of ISIS leader Abu Bakr al-Baghdadi last month, he was widely ridiculed for embellishing details of the raid. Journalists and fact checkers dissected every word of his press conference to catch him in one of his trademark lies. But all of them missed one of the president’s statements that is almost certainly false.

In this case, however, it’s tough to blame Trump. This wasn’t one of his usual lies. He simply said something that is very likely wrong. It’s not his fault and he didn’t make it up. This particular falsehood was passed up the military’s chain of command and nobody ever paused to think about whether it will turn out to be wrong. We don’t blame them. It’s equally difficult to fault the journalists covering his announcement for not catching it. They simply don’t think along these lines.

But all of us should… and today is the perfect day to do it.

So what was this thing Trump got wrong? It was an innocent sentence that seemed to be correct. “We had no soldier injured,” the president said.

That doesn’t sound false, does it? After all, we would know if a soldier participating in the raid had been shot or blown up by a booby trap. But we have no idea what kind of emotional scars the troops involved in the raid have suffered. They had just been involved in a high-stress, life-or-death situation and witnessed how a man had blown up himself and two children.

How can that not leave an invisible mark?

Obviously, it’s not just these particular soldiers. The same applies to the hundreds of thousands of Americans who have seen combat.

“Seen combat.” That is a fairly benign phrase for what they really experienced. Maybe they witnessed a friend die in their arms in a horrible way. Maybe they survived a near-death experience. Maybe they killed somebody — a combatant or a woman or a child. Or maybe the stress of finding themselves in a kill-or-be-killed situation day after day just wore them down.

Think about going through that and, all of a sudden, a broken leg doesn’t sound so bad, right? Because that will heal. An invisible trauma, however, may not. People can carry that around for a lifetime without anybody noticing.

But they don’t award purple hearts for psychological injuries like post-traumatic stress disorder.

Soldiers are taught to be tough. The military is a very macho culture. Many of these men and women don’t speak about the things they have seen and experienced once they get home. And, unless you have walked in their boots, it’s very difficult to understand what they have gone through.

That is why, in far too many cases, their loved ones don’t find out about these struggles until it is too late. Which brings us to this moment.

Right now, a veteran is getting ready to commit suicide. Statistically, at least 16 of them will kill themselves on Veterans Day. So, as you are reading this, somewhere in the US, somebody is preparing to end the life they once risked for their country.

But this isn’t about numbers. It’s about lives. It’s about people who are suffering because they were thrust into terrible situations by the politicians the American people elected.

We should remember that, not only on Veterans Day but also on any other day. Still, today might be particularly difficult for some veterans. Sure, they can get a free haircut or a complimentary meal, but all that hoopla probably brings up some things many of them would rather forget.

So, if you know a veteran who may be struggling, reach out to them. They may be one of those 16.

That’s the number for the National Suicide Prevention Lifeline and veterans calling it can press 1 to reach a VA staffer. Troops currently serving abroad can find information here on which number to call.

The cartoon above was created by DonkeyHotey for WhoWhatWhy from these images: gun (Marco Verch / Flickr – CC BY 2.0) and dog tags (US Air Force).