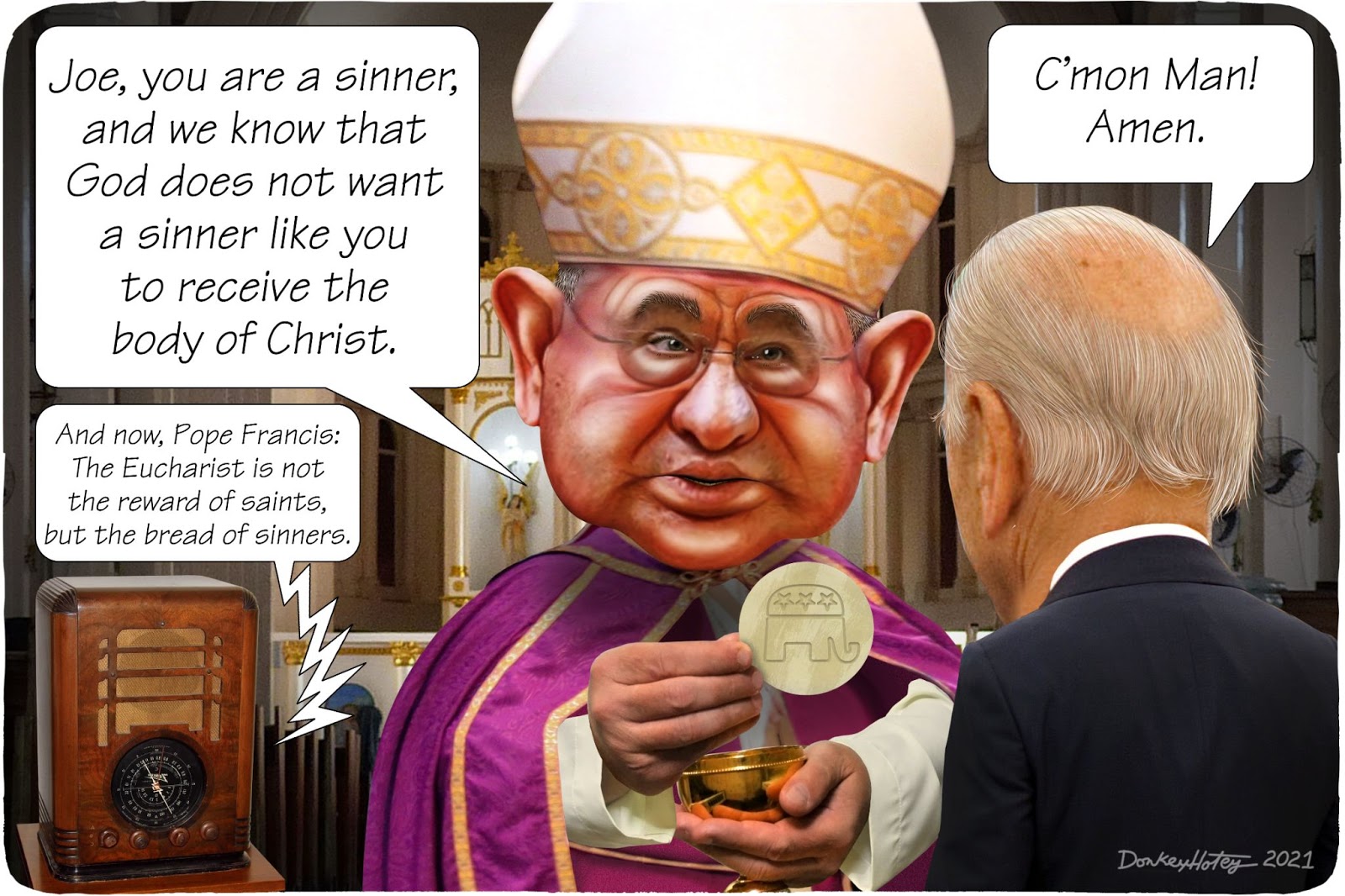 The Trinity of Hypocrisy

When you get the chance to remind the public that you should not only be known for your role in covering up hundreds of sexual abuse cases — most of them involving minor victims — but also as an archaic, deeply hypocritical organization that should not be taken seriously by anyone, then you have to take it.

And that’s what the Roman Catholic Church of the US did in an impressive fashion this month.

First, there was the “victory” it celebrated when the Supreme Court ruled that Catholic Social Services (CSS), which is part of the Archdiocese of Philadelphia, could continue to deny same-sex couples the opportunity of providing homes to foster children. It affirms the view of the court that religious organizations can freely discriminate against individuals and groups based on their interpretation of a 2,000-year-old book (written in a language nobody speaks anymore about 1,500 years before somebody finally realized that the sun did not revolve the Earth… and was immediately punished by the Catholic Church for this discovery).

In an impressive display of mental gymnastics, Philadelphia’s Archbishop Nelson J. Pérez hailed the decision as a ruling that “brings light and relief for children in need of loving homes and for the heroic foster parents who open their hearts and doors to care for them.”

At the risk of sounding cynical, the Catholic Church is probably not the country’s foremost authority on what’s good for children — and limiting the number of foster homes is in no way a win for kids.

Not to be outdone, an overwhelming majority of the US Conference of Catholic Bishops (USCCB) voted to take initial steps to deny the Eucharist to Catholic politicians they don’t like.

In particular, their resolution to move forward in drafting a divisive document on “the meaning of the Eucharist in the life of the Church” is widely seen, and even described by some of the bishops themselves, as an attempt to publicly shame President Joe Biden for his support of abortion rights, which some US bishops believe reveals an inconsistency with Catholic teachings that is so unforgivable that anybody committing it should be denied a sip of wine and a wafer. The USCCB has since clarified that “there will be no national policy on withholding Communion from politicians,” which further highlights that this was all just a publicity stunt aimed at the president.

By the way, if you are unfamiliar with the power structure of the Catholic Church, a bishop in this case is not a chess piece that can only move diagonally but rather a powerful old man who has to be celibate (with a possible exception carved out for relations with altar boys) and loves to lecture others on issues like women’s rights or what constitutes a proper family. In other words, they are near the top of the Catholic food chain… we’ll circle back to that a bit later.

It’s possible that they may have intended their message to be an understated warning to Biden. Instead, they shined a light on themselves and their own hypocrisy. And believe us, when the curtain is pulled back on the Catholic Church, it’s seldom a pretty picture.

In this case, their subtle blackmail of a US president revealed numerous inconsistencies. We will focus on the main three, which we refer to as the Trinity of Hypocrisy.

The first and most obvious is that Biden seems to be the sole target of what Democratic Catholic members of Congress described in a statement last week as the “weaponization” of the Eucharist. At best, other prominent Democratic Catholics, like House Speaker Nancy Pelosi (CA) or Rep. Alexandria Ocasio-Cortez (NY), who also support a woman’s right to make decisions about her own body, will become collateral damage.

None of them are having or performing abortions, by the way, so they are not even violating the “You shall not kill” commandment — even if that were so broad in scope as to encompass a tiny cluster of cells in a woman’s body.

And what about Catholic politicians who are pro-death, such as Texas Gov. Greg Abbott (R)? His state scheduled another execution for next week — and Abbott could prevent it with the stroke of a pen. That is a much greater power than Biden has. While the president could take steps to make abortions more difficult to access, that in itself would not prevent women from getting them (at greater personal risk to themselves). Abbott, however, could directly intervene to save a life. If he doesn’t (and he won’t), isn’t he much more responsible for the killing of a human being than Biden?

And what about the other commandments? A very good case can be made that lawmakers like Reps. Paul Gosar (R-AZ), Devin Nunes (R-CA), and Elise Stefanik (R-NY), in their unquestioning subservience to former president Donald Trump, have created a false idol. That’s supposed to be a no-no for Catholics.

Or what about lawmakers who don’t lift a finger to protect the planet? While that isn’t a violation of a commandment, the Catholic God was pretty explicit that humans should handle it with care.

Pope Francis feels very strongly about this. He has called on world leaders to “renew commitments decisive for directing the planet towards life, not death.”

He even released an encyclical, or papal letter — which is a big deal in Catholicism — on care for “Mother Earth,” our “common home.”

Let’s talk about the pope some more. According to Catholic teachings, his pronouncements on matters of faith and morals are infallible — at least, “infallible” as defined and limited by 2,000 years’ worth of clarifications and exceptions. And he certainly outranks bishops — by a lot.

He has actually weighed in on this very specific issue — not a long time ago, but this month. “The Eucharist is not the reward of saints, but the bread of sinners,” he said during Mass on the Feast of Corpus Christi.

That, by the way, is the Catholic holiday specifically about the Eucharist. Francis really couldn’t have been more explicit about his views, and, with him being infallible and all, shouldn’t the US bishops have gotten the message? By still voting on their resolution, they are placing themselves above the Holy Father, which is another big no-no, so who is really violating the rules of the church?

Finally, for argument’s sake, let’s pretend that the US bishops are not circumventing the pope and that the failure to oppose or stop abortions actually does violate one of the Ten Commandments.

In that case, aren’t Catholic bishops — and other so-called religious leaders — in the US more culpable than anybody? They are the ones standing in the way of any policy geared toward reducing the number of abortions (with the exception of the ineffective strategy of promoting abstinence).

Their refusal to play an active role in coming up with solutions to reduce the number of unwanted pregnancies — such as sex education or making birth control available — is causing great harm to untold women each year.

So, maybe, as true believers, Los Angeles archbishop and USCCB president José H. Gomez and his fellow zealots should take the teachings of Jesus Christ to heart:

“You hypocrite! Remove the wooden beam from your eye first; then you will see clearly to remove the splinter in your brother’s eye.”