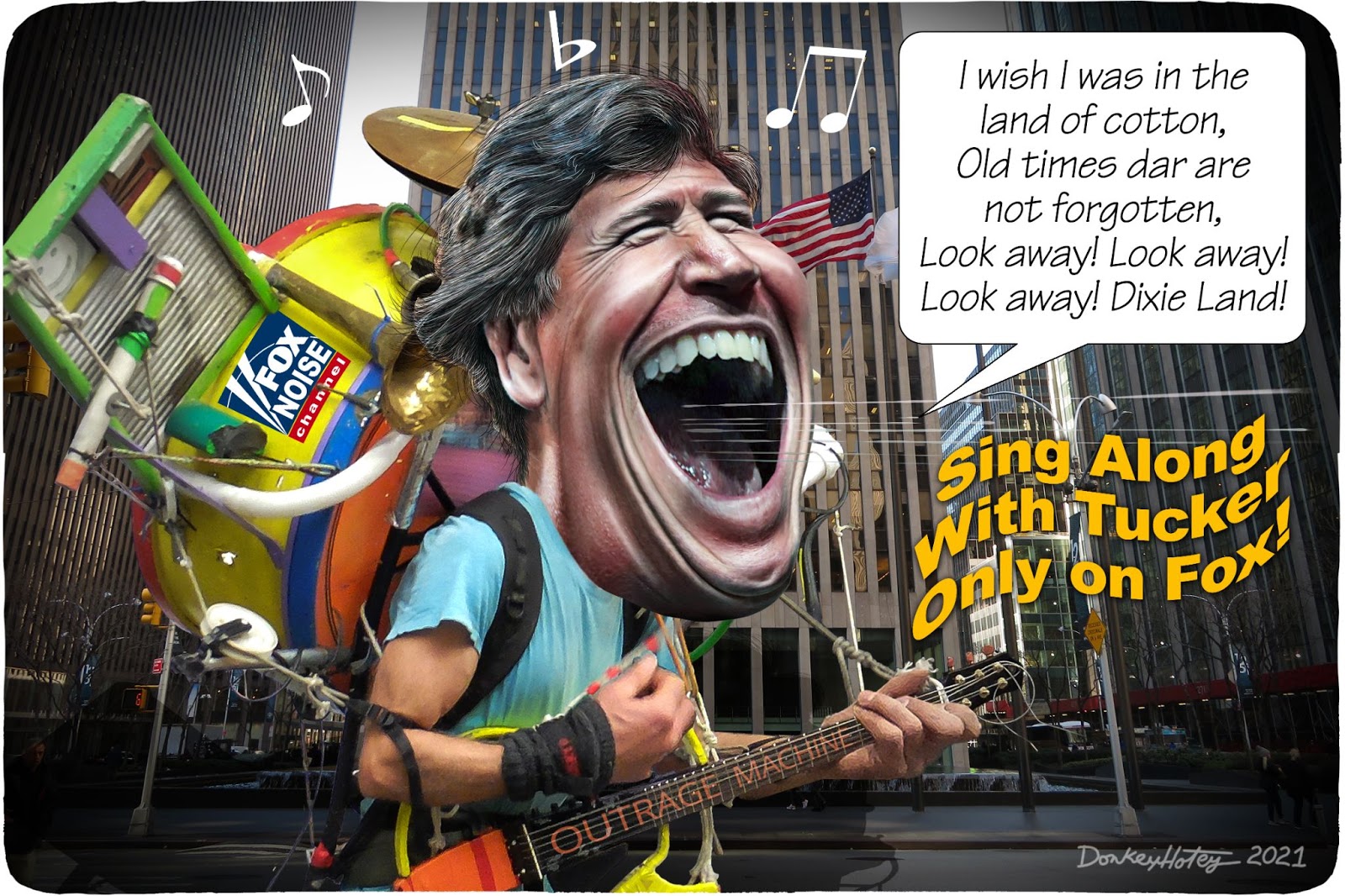 Two weeks before the Olympic Games are set to begin, we already know two of the main winners: COVID-19 and the conservative outrage-industrial complex.

There are some striking similarities between the two: For both, the Olympics will be a target-rich environment. COVID-19 will get to spread among athletes and others who travel to Tokyo for the games, who will then carry death and disease back to their home countries.

Fox “News” executives, conservative pundits, congressional Republicans, and other professional right-wing rageaholics, on the other hand, will get to peddle fake outrage about perceived unpatriotic actions of US athletes to an audience eager to lap up anything that keeps them in a constant state of simmering anger.

While the virus doesn’t know any better, the many members of the outrage-industrial complex should. They are willingly stirring up discontent and poisoning the minds of gullible Americans because it is good for business.

This week, we saw a perfect illustration of what that looks like… and were reminded of where it leads: First, right-wing media outlets (and the people who make a living appearing on them) fell all over themselves to cover the “story” of how the women’s national soccer team “disrespected” a veteran, the flag, America, bald eagles, baseball, apple pie, etc. (If you are unfamiliar with the story, it probably means you don’t watch Fox and don’t read right-wing news. Congrats!)

Supposedly, members of the team did not face the flag or the veteran who played the national anthem. This narrative turned out to be completely false, and nobody was disrespecting anything or anyone. Obviously, that did not keep the outrage-industrial complex from breathlessly covering it.

But let’s pretend for a second that some of the soccer players had turned their back on the flag or the veteran playing the national anthem, i.e., exercised their right to free speech. How is that a story that merits wall-to-wall coverage?

This seems more like an item of interest for a blog such as superawesomeamericanpatriots.us or womenssportsshouldbeillegal.net. And then it wouldn’t matter if a few members of some fringe group briefly got upset about something that didn’t actually happen.

But the problem is that, for years, tens of millions of Americans have been systematically and intentionally radicalized by Fox “News” et al. and are now members of that fringe. They live in an alternate reality that has been created for them by right-wing media. It is based on lies, embellishments, and the careful selection of stories that will keep them angry at “others” in perpetuity.

And it all rings true to them because it fits into a world view that is perpetuated and amplified by the outrage-industrial complex. In other words, they want it all to be true because it is the only way the world makes sense.

That is why the outrage-industrial complex feeds them a steady diet of the only “news” they want to hear:

That’s just a small sample. If you believe all of it, then it’s a scary world for the average Fox “News” viewer.

Still, with so many perceived threats to their way of life out there, it’s comforting for them to hear Tucker Carlson talk about the “great replacement theory,” a cornerstone of white supremacist ideology that says whites are being replaced by people of color.

In light of what they are being spoon-fed 24/7 in the right-wing echo chamber, it all sounds plausible.

The soccer story is the perfect example of how the outrage-industrial complex works because it also shows that facts and objective truth no longer matter. Even after Fox “News” acknowledged that they had probably gotten it wrong, they continued to cover this non-story. The consensus seemed to have been, “Well, it could have been true.”

In one of Fox’s “straight news” shows (which are anything but), Clay Travis, the founder of a “fearless sports media company” who is now a co-host of a conservative radio program running in Rush Limbaugh’s former time slot, weighed in on the story… and he may not have realized that he perfectly summed up the absurdity of it all.

“I think this is emblematic of where we are with sports now, where a huge percentage of American sports fans totally think it’s believable that the US women’s soccer team would turn their back on a 98-year-old World War II veteran as he plays the national anthem and not even think twice about it,” he said.

“I think it is unfortunately a sign of where we are as a country that so many of us just presume that that level of disrespect is occurring via our national teams during the anthem.”

Travis likely lacks the introspection required to realize that “so many of us just presume” that there was some gesture of disrespect because they are being brainwashed by right-wing media.

“Maybe they didn’t turn their backs on 98-year-old Pete DuPré,” he said. “But as some pointed out, it didn’t look good. They were kinda turning everywhere and it just didn’t look respectful.”

The soccer example is also an illustration of the endless Fox feedback loop. They air a segment on a perceived or trumped-up controversy; then they have talking heads weigh in to keep the story alive endlessly. This includes members of Congress.

GOP Lawmakers: A Critical Piece of the Outrage-Industrial Complex

Late last month, when star hammer thrower Gwen Berry turned away from the flag during a medal ceremony, various members of Congress, such as Madison Cawthorn (R-NC) and Dan Crenshaw (R-TX), weighed in and suggested she should be kicked off the Olympic team.

Cawthorn is an especially interesting case. If he wanted to talk about an Olympic scandal, maybe he should have addressed reports that he lied about hoping to qualify for this year’s Paralympics.

Obviously, Fox immediately gave Crenshaw a platform to argue for Berry’s dismissal from the team. This is a mutually beneficial relationship. Fox gets to keep the story alive — after all, a member of Congress weighed in, so it’s “news” — while the lawmakers see their profiles increase. The more rabid they are, the more likely it is that they will be invited. That, in turn, boosts their profile with the base. In fact, there are now plenty of GOP lawmakers whose only goal is to generate an online following and “trigger the libs.”

To be fair, the left has its own outrage-industrial complex, but it is much less organized and much less dangerous. It is usually not so much about creating false narratives and more about dwelling on the stupidity, lawlessness, and ridiculousness of former President Donald Trump and his cult.

All of this is just a sign of what’s to come during the Olympics. “Straight news” anchor Bill Hemmer gave away the game in the segment with Limbaugh replacement Travis.

Well, Bill, we are sure that Fox will see to that.

It would be easy to say that this is just some dumb controversy about sports. Sadly, though, it is not. Because, if the narrative of “Well, it could be true, so we should cover it and do something about it,” seems familiar, it’s because that is the same argument Republicans use to pass voter suppression laws across the country.

Their argument is essentially identical: “Well, there is no evidence of widespread voter fraud, but our supporters think there is, so we should pass restrictive election laws.”

And, of course, their voters think that way because they are bombarded with a narrative suggesting it is the truth by conservative “news” outlets and in their social media echo chambers.

This false election narrative, along with Trump’s baseless and much-debunked claim that he won the election, also shows where this can lead: An erosion of democracy and an attempt to violently overturn the certified results of an election.

Not that Trump’s supporters would know… because the right-wing outrage-industrial complex is much more interested in athletes (possibly) slighting the flag than covering the six-month anniversary of the January 6 insurrection.

It is easy to understand why. After all, they played a big role by not pushing back against Trump’s Big Lie and even perpetuating it. If they hadn’t, or if they were to cover the events accurately now, they would lose their audience.

Because believing in a false but more comforting reality is like a drug. You can never get enough.

It’s not difficult to see how this ends. You can’t keep millions of people in a state of constantly simmering anger without things boiling over eventually. We got a small taste six months ago, but that was just the beginning.

Chances are that things will eventually spiral out of control in a way that is much bigger and much more violent than “just” a mob storming Congress. And when that happens, Fox et al. will be there to lie to us about it.

After the first draft of this editorial was written, a group of 39 Republicans, which included Crenshaw and Cawthorn, sent a letter to the US Olympic and Paralympic Committee (USOC) to express their concern that US athletes might use their platform “to perpetuate divisive, hateful and anti-American ideologies.”

The lawmakers are calling on the USOC to make sure that “all athletes representing the United States of America at the Olympic games this summer will do so proudly and patriotically” instead of “spout[ing] shameful anti-American rhetoric.”

If you are keeping score at home, blind allegiance to the flag is great; criticism of pervasive problems (involving systemic racism and misogyny) is taboo.

Oh, and if you have been paying attention, you will also know who reported this.

The cartoon above was created by DonkeyHotey for WhoWhatWhy from these images: