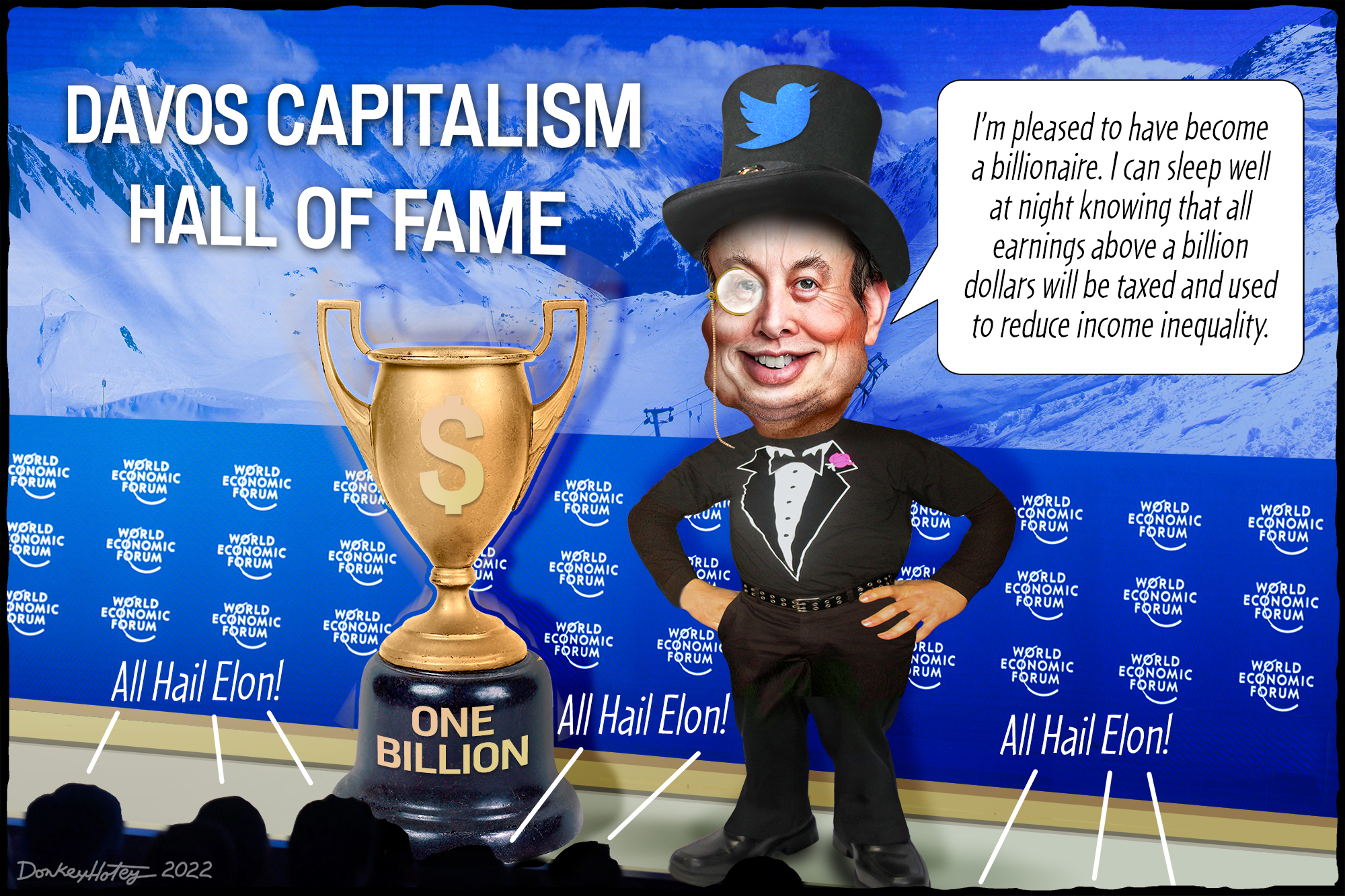 Making fun of Elon Musk and his purchase of Twitter would be easy. Here we have a guy who just wants to be loved… ideally by everybody. That kinda worked until he decided to buy himself the most expensive toy in history.

However, as Musk quickly found out, it’s not possible to portray yourself as a politically neutral free speech advocate and business genius when you take over one of the world’s largest social media companies, ask others in need of validation to give you $8 per month, start banning the accounts of people who make fun of you, and urge Americans to vote for the GOP. Oh, and posting photos of Nazi soldiers doesn’t help.

Now we know he is just another insecure white dude with right-wing views, which is not exactly original.

And neither would be ridiculing him some more. That’s why we are going to do something completely different. We want to thank him.

Musk’s purchase of Twitter for $44 billion is the most powerful argument for aggressive wealth distribution since some French princess, upon being told that the peasants had no bread and were starving, reportedly responded, “Let them eat cake.”

If you are reading this during Sunday brunch and saying to yourself, “Well, that was France more than 200 years ago,” consider that 64 percent of Americans are living paycheck to paycheck, meaning they are one bit of bad luck away from sliding into poverty.

Even worse, and speaking of crippling insecurity, more than 30 million Americans are living in “food insecure” households (for what it’s worth, if Musk had wanted to, he could have bought each of them an entire chocolate cake every day this year instead of snapping up Twitter).

And while ordinary Americans have been struggling, billionaires have been accumulating more money at unprecedented rates. For example, 25 years ago, no matter how fragile the ego of the richest person at that time, they wouldn’t have been able to afford to pay this kind of money for the 1990s equivalent of a social media site. Instead, they would have just had to go to therapy or get a puppy (which are available in shelters throughout the country).

But, thanks to having seen his wealth increase by $121 billion in 2021 alone (which, admittedly, was down a bit from a surge of $140 billion the previous year), he could cavalierly shell out $44 billion for the privilege of “running” Twitter which, in Musk’s case, means firing almost everybody and then spending his time responding to people on the site who say nice things about him.

It’s not just Musk, of course. If you think this editorial is politically motivated, just forget everything we wrote about him and Twitter and replace it with “George Soros” and “political donations.”

In fact, we made this handy image to help you understand why it is bad for any person to have that much money and buy themselves outsized influence over the lives of the rest of us. You can pick your own adventure, so to speak. 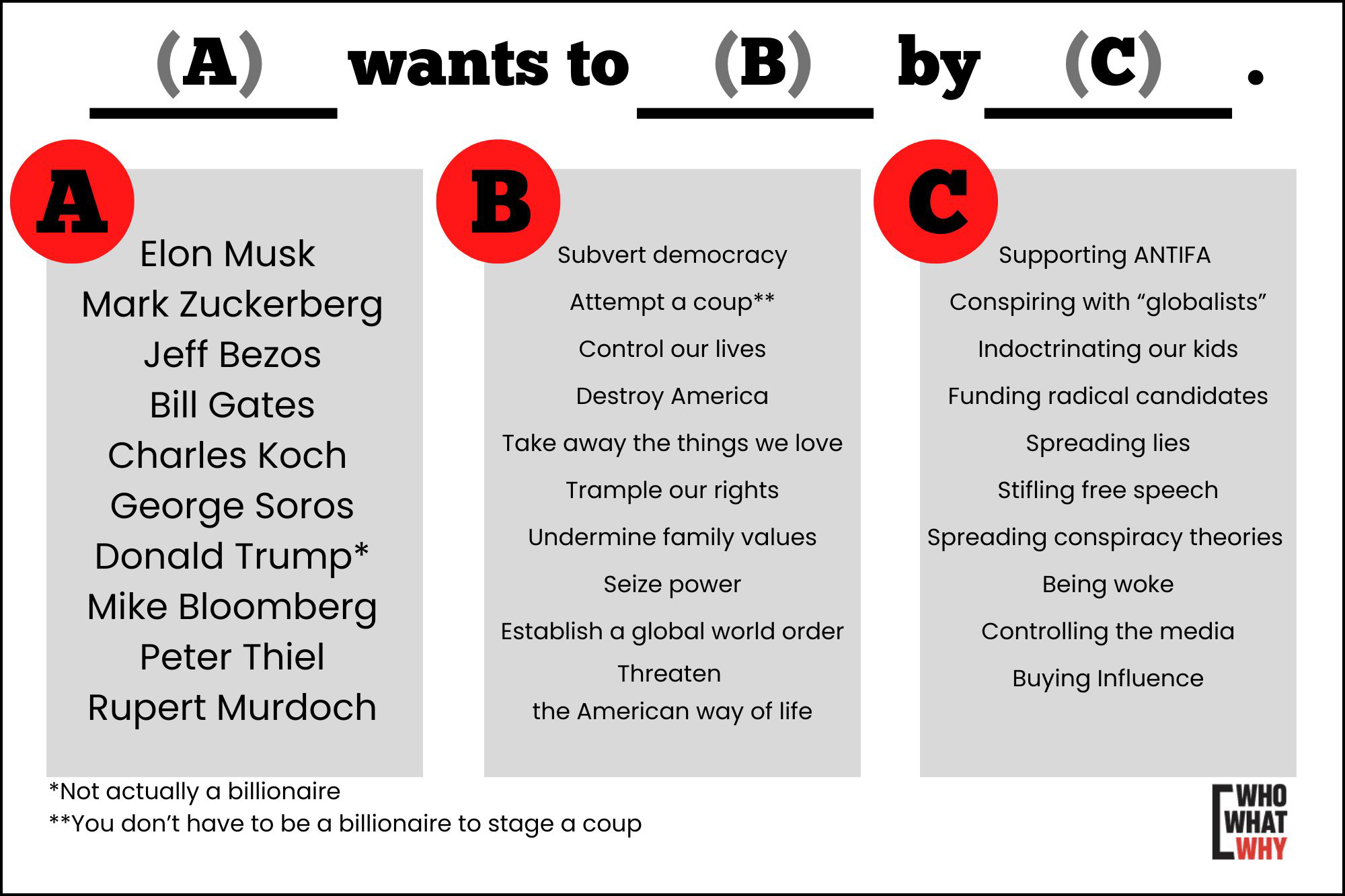 By the way, since “corporations are people” in the US, we also made this second chart. 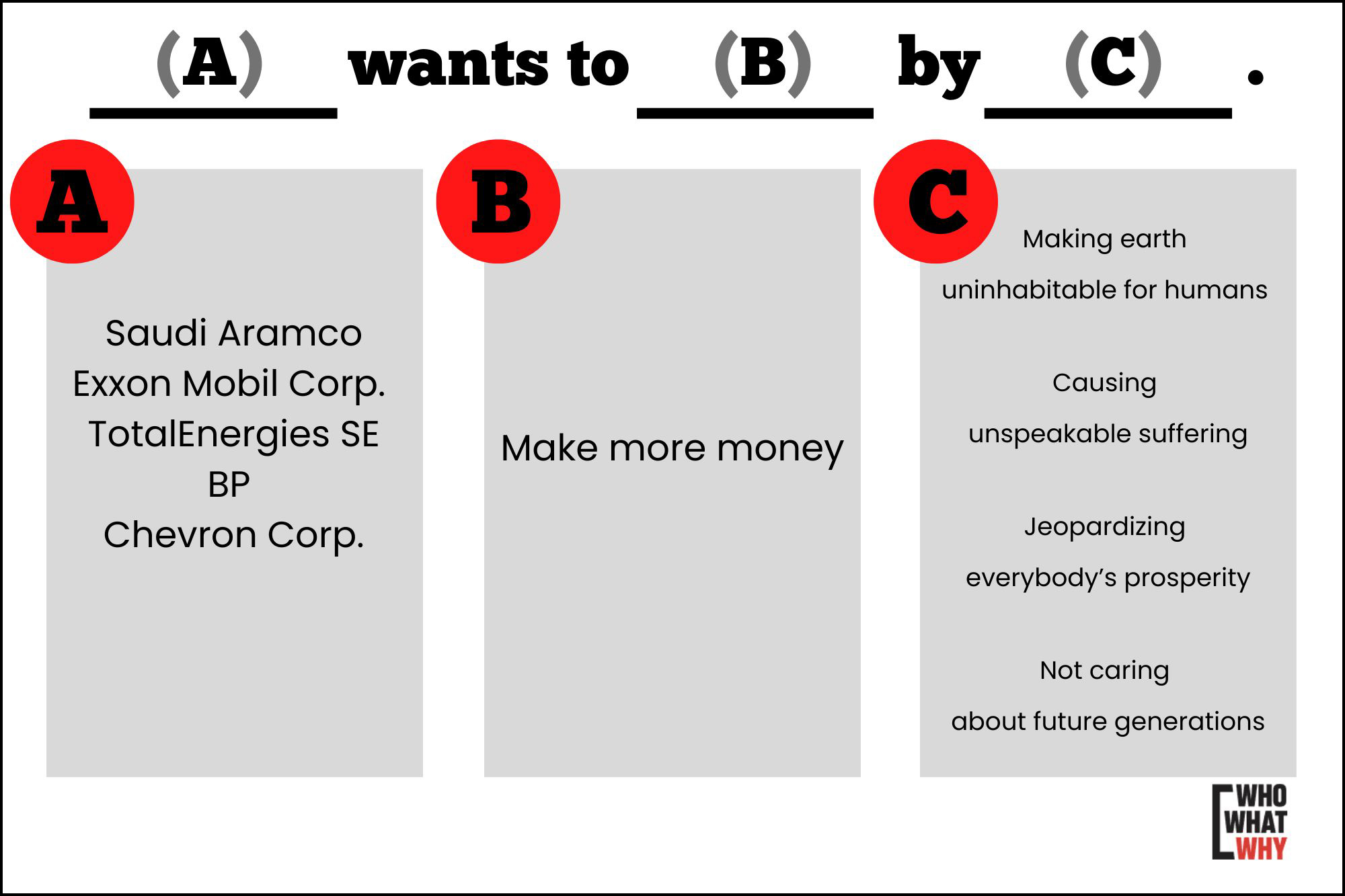 The point is that, while most regular people are struggling, the rich are getting richer and companies are raking in record profits. The Twitter purchase is simply the best example to show how ridiculous things have gotten.

And, instead of paying taxes, the über-rich are spending their not-so-hard-earned money on everything from rockets to influencing elections.

So, regardless of their politics, nobody should have more than $1 billion. Even a “wealth tax,” like those proposed by progressive lawmakers, doesn’t go far enough.

The rule should be simple: Nobody should own more than $1 billion. Every penny above it should be taxed 100 percent.

That doesn’t mean the achievement of amassing such an obscene amount of wealth should go unnoticed or unappreciated. On the day you become a billionaire, you should be flown to Davos in a golden plane where a bunch of bankers present you with a top hat, a monocle, a trophy, and a plaque in the “Capitalism Hall of Fame.”

No human being has ever needed more money than $1 billion. Need proof? A couple of weeks ago, the Powerball jackpot topped $2 billion. If the winner decides to get a lump sum, after taxes that comes out to about $700 million (ironically, when an ordinary person gets so much money, they have to pay their fair share. If the same amount of money were simply piled onto the hoard of the Musks and Zuckerbergs of the world, the government likely wouldn’t see a cent of it).

Still, even though that jackpot would end up being less than $1 billion, we guarantee you that not a single person who dreamt of winning it thought to themselves: “Well, that’s not going to be enough.” Because it is more than any person who is not a megalomaniac could ever need.

And that’s what it comes down to: Whether it’s owning Twitter, building phallic rockets, or buying politicians, what these billionaires want is to be immortalized in some way. So, let’s give them what they want. Let’s make them the last generation of billionaires ever. Let their crowning achievement be that they demonstrated that no person should have so much money while so many others are suffering.

And then let’s use those trillions to make the world a better place for everybody.