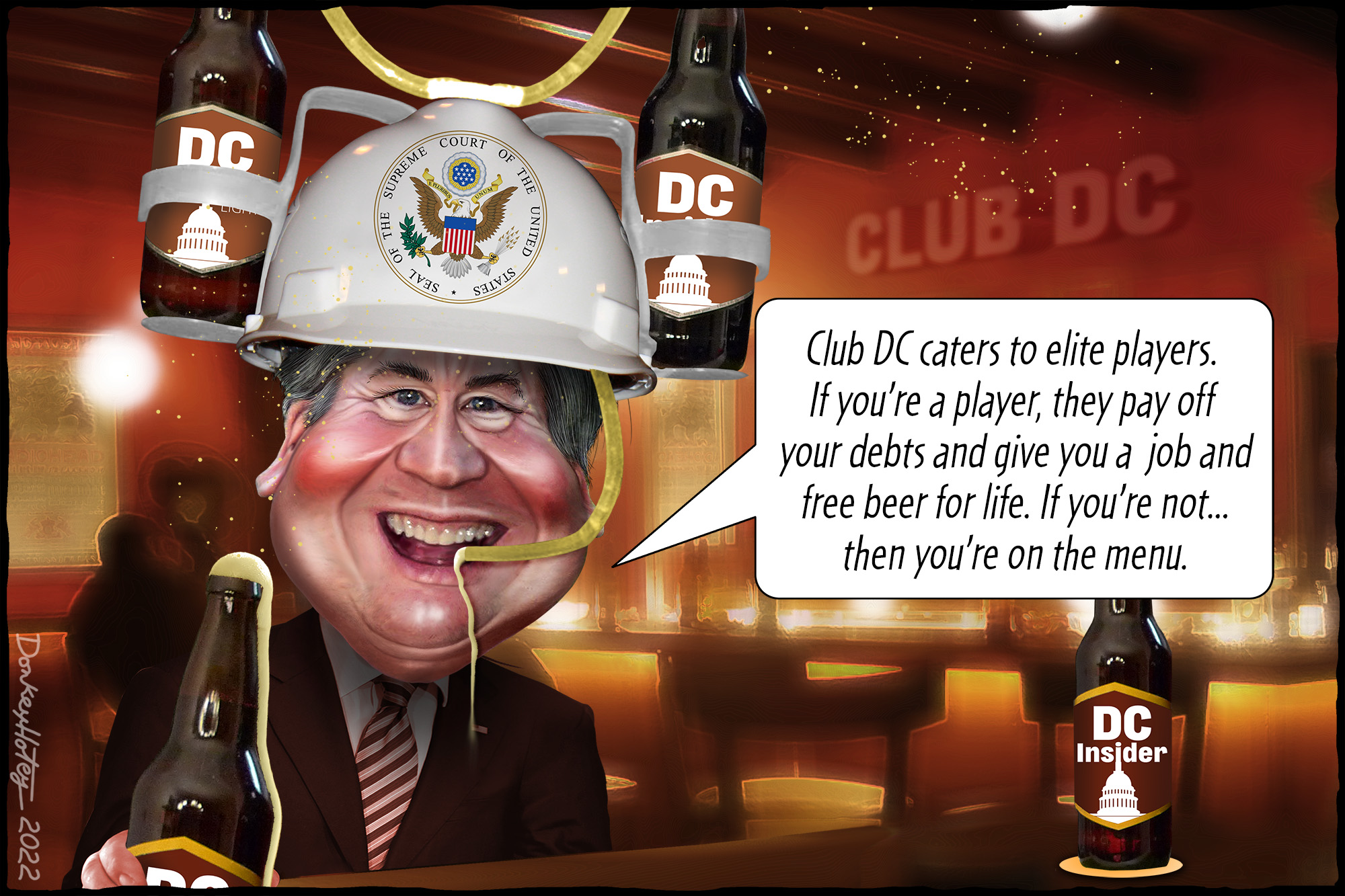 How One (Cocktail) Party Rule in DC Is Holding Back America

Here is something you need to know about Washington, DC: It’s a big club. The membership includes Republicans, Democrats, bureaucrats, lobbyists, journalists, and, most importantly — not you.

After yapping at each other’s heels all day in the halls of Congress and on TV, they often spend their evenings palling around in DC’s many bars and restaurants. Like Morton’s The Steakhouse, which is where our story begins.

The other day, Supreme Court Justice Brett Kavanaugh decided to dine in this fine establishment. A few peaceful protesters congregated outside and, according to Politico, which broke this “story,” the frat boy-turned-jurist was ushered out of the back door by his security detail.

While the paper did not report on whether Kavanaugh cried into his beer over this injustice (which seems like a fair assumption since we know from his confirmation hearing that he loves beer and crying), we did learn that he “did not hear or see the protesters and ate a full meal but left before dessert.”

HOLD THE MOTHERF***NG PRESSES. What an amazing story!

Of course, this is the kind of thing that gets the DC establishment up in arms. Earlier this year, when people peacefully exercised their First Amendment rights outside the homes of some of the justices who were getting ready to set back women’s rights by 50 years, Congress acted swiftly. No, not by passing legislation to make abortion legal across the US, but rather by extending the protection Supreme Court justices enjoy to their families.

Why? you might ask. Because, above all, the members of the DC establishment look after their own.

That is why, this time around, the predictable response was the same: How dare protesters deprive Kavanaugh of the privacy that he and his fellow cult members are denying all girls and women of child-bearing age (which includes 10-year-olds who were raped, even if the right-wing media doesn’t want to admit this is true)?

But, seeing how Kavanaugh was unaware of the demonstrators and nothing happened, certainly this was the last we heard of this dumb story, right? Oh no! Far from it. Fox News not only kept it going on their nightly white-nationalism influencer shows but also in its “news” segments.

And just like that, this non-story is national news, people get to be up in arms about it and point fingers at the other side, media outlets are making money, and a DC eatery gets free publicity. In other words, everybody in the club wins.

Let’s contrast that with an article that appeared on WhoWhatWhy yesterday. As opposed to Steakhouse-gate, it is about an actual problem: Following the 2020 election and former President Donald Trump’s made-up claims of election fraud, scores of his supporters took it upon themselves to harass and threaten election workers. In many cases, these are volunteers and often nice elderly ladies and gentlemen who believe in democracy and want to do their part to ensure that elections run smoothly.

Now, however, many of them are considering calling it quits. And who could blame them? Trump and the GOP have poisoned the well of democracy so much that anybody associated with running an election has become an enemy of MAGA nation.

As a result, there will likely be a shortage of experienced and qualified poll workers this fall and in 2024. And that’s the best-case scenario. The alternative is that the people who leave because of the hostile environment Trump created will be replaced by his most ardent supporters, and who knows what kind of havoc they will wreak in search of evidence for whatever wacky conspiracy theory they believe in at the time?

So, let’s compare the two stories: One was written and then kept alive by many extremely well-compensated DC reporters (because if you hear that journalism is in trouble, that might be the case for local news but not for media outlets in Washington, which are doing very well. For example, Politico and The Hill — two quintessential inside-the-Beltway publications — recently sold for more than a billion dollars and $130 million respectively).

The other was written by an intern who is learning reporting as part of WhoWhatWhy’s journalism training program.

One is about something that is truly inconsequential bordering on stupid.

The other is about another threat to a US democracy that is already so battered that it resembles the love interests of various GOP candidates.

The story about Supreme Court protests resulted in the passage of a law to protect people from harassment (and, to be clear, people who are harassed and threatened should be protected. But that means all people, and not just those who are privileged).

The story about the threats to election workers did not.

One will get shared a million times, and the other will not (that last one, dear reader, is on you).

The entire Kavanaugh/Supreme Court protest story is really only useful to illustrate one thing: To members of the Beltway Club, this is all just a dumb game with the goal of accumulating, maintaining, and having access to power.

Or, to put it another way: It’s not about the concerns of the American people or solving their real-life problems; it’s about still getting invited to each other’s cocktail parties.

Ultimately, everybody is performing.

Lawmakers are using members of the other party as stock villains who stand in the way of progress (or regress, in the case of Republicans) and, therefore, as an excuse for why they don’t get anything done.

In spite of this lack of accomplishment, they can rest assured that their jobs are very secure (and even more now, after another round of gerrymandering). Even if some of them occasionally lose, they can just stick around, work as lobbyists, and fund this entire charade.

The same applies to the political appointees who run various departments and agencies.

And most of the journalists are just trying to give the appearance of asking tough questions without ever actually holding anybody to account… because that could mean losing their precious access and potential book deals.

So, in the end, everybody just kinda scratches everybody else’s back and gets rich without ever doing anything of consequence.

Or, to put it more simply: Once you are a member of Club DC, you can stay on the yacht as long as you don’t rock the boat.