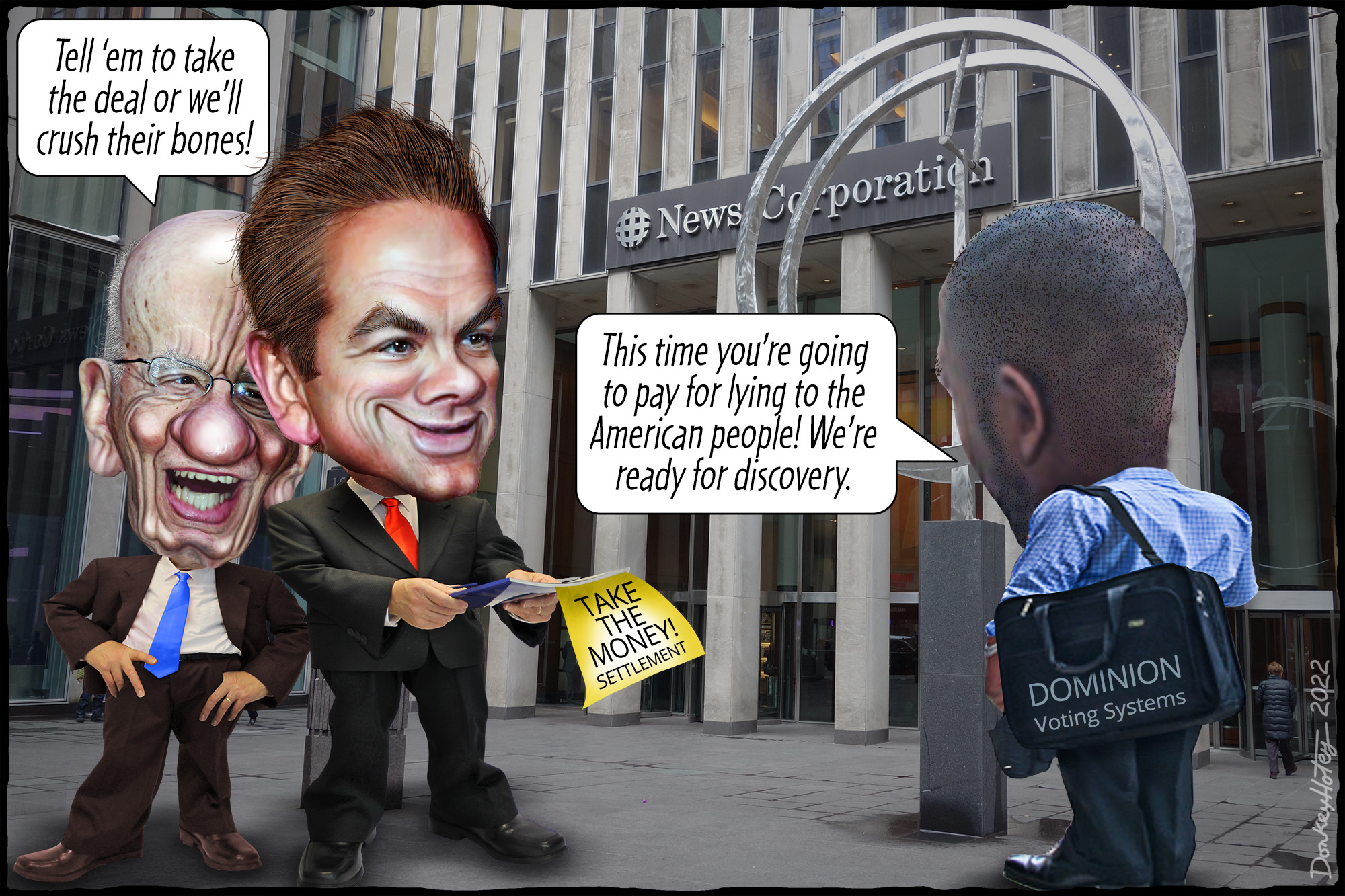 Help Us, Dominion… You Are Our Only Hope

There is a widely held belief that democracy in the United States is in peril. If only that were true. In reality, things have progressed far beyond democracy being “in peril.” It would be much more accurate to say that it is on life support — and one party is desperately trying to pull the plug.

Seemingly every day, the House Select Committee to Investigate the January 6th Attack on the United States Capitol is offering new insights into former President Donald Trump’s unsuccessful coup. To be fair, it’s not just congressional investigators who are shedding light on the events of that day and those leading up to it. We are also getting these details from intrepid journalists and brave members of Trump’s administration who were silent back then but are now trying to make a buck off information that would have been really useful for the public to have in 2020 but is more personally lucrative to them now.

The GOP’s solution to this attempted coup seems to be to get rid of these few gatekeepers of democracy within its own ranks.

The picture that emerges is clear: If it had not been for a few actually courageous Republican officials and career civil servants, Trump would have succeeded in, at the very least, plunging the nation into much greater chaos than he already did. This, by the way, could not have happened without right-wing news outlets giving his Big Lie the fuel it needed.

While that is troubling enough, the response of the Republican Party is much more disturbing: The GOP’s solution to this attempted coup seems to be to get rid of these few gatekeepers of democracy within its own ranks.

That may sound shocking but should come as no surprise to anybody who has been paying attention. Undermining voting rights — especially for minorities — has been a hallmark of GOP policies for decades; and Republicans have really stepped up their efforts recently, especially in the swing states they control. They have been aided by a Supreme Court that has ruled that corporations are people, money is speech, and racial discrimination is awesome.

And that was the Supreme Court before Trump added three religious fundamentalists to the bench. If the rulings of this week are any indication, the current court would gladly overturn the Civil Rights Act and, while they are at it, the 15th Amendment, which states that Americans cannot be denied the right to vote on the basis of their race.

Heck, Clarence Thomas would probably write the majority decision and then lock himself up for having voted for it.

But how about the Democrats? Surely they must be going all out to defend democracy. After all, it’s in their name and they stand to lose their access to power if the GOP has its way.

Well, not so much. As we noted recently, they are a feckless bunch. While Republicans are launching their all-out assault on the right to vote, Democrats seem to be content with pontificating about how wrong all of this is.

Or, to put it differently, if this were a street fight, the GOP would come armed with brass knuckles, broken bottles, and bats, and Democrats with righteous indignation and a sense of moral superiority.

In other words, if you like democracy, things aren’t going great.

The GOP’s transformation from a pro-business, pro-gun, and anti-choice party into a pro-crazy, pro-nationalism, and anti-reality movement has coincided with the rise of Fox “News.”

However — and bear with us because this is pretty ironic — there is somebody out there who can deal a real blow to these enemies of democracy: a couple of voting machine companies.

Yes, you read that right… and it really is the perfect illustration of how bad things are: We are hoping that voting machine companies will serve as champions of democracy.

How is that possible? After all, voting machines — and their lack of transparency — are one reason many people are so distrustful of election results (and why these machines are no longer used in many European countries).

Actually, it’s pretty simple: The GOP’s transformation from a pro-business, pro-gun, and anti-choice party into a pro-crazy, pro-nationalism, and anti-reality movement has coincided with the rise of Fox “News.”

Founded by Australian media mogul Rupert Murdoch, the network has successfully brainwashed conservatives by feeding them a daily diet of propaganda, lies, and demagoguery. If you don’t know Murdoch, just imagine a nonagenarian Joseph Goebbels played by Mel Gibson.

For the most part, Fox gets away with it. Under the guise of being “fair and balanced,” which is as preposterous as claiming that crystal meth is “healthy and legal,” the network grew quickly.

There are lots of reasons for its meteoric rise. In terms of its audience, Fox tapped into a gold mine: millions of closeted bigots who are much more interested in being aggrieved than informed.

Fox also masterfully played the establishment. For far too long, it was treated like a news organization. In fact, this continues to this day. It truly defies belief that Fox has a seat in the White House press room and gets to ask questions even though it is now basically an arm of the GOP.

Fox and the Murdochs aren’t terrified of paying off victims; it’s the discovery phase in a trial that they fear.

Last but not least, Fox has benefited greatly from libel and slander laws that make it very difficult to punish a news outlet for making stuff up. Basically, as an injured party, you not only have to prove that a statement is false and is likely to cause you actual harm in some way, but also that the publication of the information was negligent or malicious.

The bar is especially high when it comes to public figures like politicians. Here, it has to be shown that the news outlet acted with “actual malice” and a reckless disregard for the truth.

For a normal media organization, that shouldn’t be much of a problem. For a propaganda outlet, on the other hand, it sometimes is.

And that’s why Fox gets sued from time to time.

Now, you might wonder why that would be a problem. Fox News is making lots of money and Murdoch is a billionaire, so how bad could it be if they were to lose a lawsuit and pay some damages to a victim of their propaganda?

Very bad, actually. Because the problem isn’t the money; it’s going to court. Fox and the Murdochs aren’t terrified of paying off victims; it’s the discovery phase in a trial that they fear.

When watching the January 6 hearings, it’s easy to see why. For example, we have learned that Sean Hannity was not only a quasi-advisor to Trump but also doing the bidding of his campaign.

Although truth matters little to the Fox audience, it might matter more to advertisers; it would be highly embarrassing if a great deal more of this kind of information were to come out.

That is why Fox News and the Murdochs (Rupert’s son Lachlan is the CEO of Fox Corporation) prefer to settle out of court or use an army of lawyers to try to get lawsuits dismissed (for example by arguing that only complete morons would think that the things Tucker Carlson says are true).

And that, finally, brings us to the voting machine companies (sorry for the circuitous route, but background and context matter a lot when democracy is on the line).

Earlier this week, a judge sided with Dominion Voting Systems, which makes voting machines and software, in rejecting Fox’s latest attempt to dismiss a defamation lawsuit against the media company and the Murdochs.

If democracy is to have any chance in the US, then the cancer that is Fox News (as well as OAN and Newsmax, which are also being sued) has to be rooted out.

Dominion is taking Fox to court over false statements that suggested Dominion was engaged in voter fraud during the 2020 election.

While Fox often makes stuff up, this case is different. Dominion asserts that the Murdochs made the conscious decision to promote Trump’s false claims about the election after the then-president had criticized the network for not adequately spreading his Big Lie. This was done in an effort to regain market share, which Fox News had lost to even more conservative TV channels with even fewer qualms about broadcasting lies and propaganda.

In other words, Dominion accuses the Murdochs of knowingly defaming the company, which might be sufficient to meet the high threshold of libel and slander. By the way, Fox News is also being sued by Smartmatic, another voting systems company.

Now, judging by the standard Murdoch/Fox playbook for defamation lawsuits, if their lawyers can’t get these cases thrown out, the next thing we’ll see is an attempt to settle.

This must not happen under any circumstances. If democracy is to have any chance in the US, then the cancer that is Fox News (as well as OAN and Newsmax, which are also being sued) has to be rooted out.

These cases have to go to trial, and the Murdochs, Hannity, Carlson, and all of the network’s other liars have to testify under oath.

They have to be exposed for who they really are… and then they have to pay the price.

And that’s why we have put together this open letter to Dominion CEO John Poulos.

We are writing today to urge you to resist the temptation to settle your lawsuit against Fox News as well as Rupert and Lachlan Murdoch. They will undoubtedly make you a very attractive offer. However, for the sake of democracy, you must refuse it.

Instead, take your case to trial, make Fox News disclose internal communications, have the Murdochs testify under oath, and show the world what “fair and balanced” is all about.

And why wouldn’t you? You and your team certainly must have received death threats after Fox News made and amplified false allegations against you… all while knowing they were without merit. Now it’s time for payback.

They made your life hell. By not settling the lawsuit, you finally get to return the favor.

Full disclosure: We don’t see eye-to-eye on the need for voting machines. We believe that votes should be cast and counted by hand. There simply are too many vulnerabilities (including many that are out of your control) and a lack of transparency when it comes to electronic voting.

Of course, you didn’t create the US elections system, you are merely profiting from it. That means that, ultimately, you are in the business of democracy.

Fox News clearly is not. A great case in point is the network’s decision to lose money rather than risk that its viewers watch the primetime hearing of the January 6 committee.

As a voting machine manufacturer (and one not in good standing with Republicans), do you really want to sit around and do nothing while the Fox-fueled MAGA crowd dismantles the elections with which you make your money?

In other words, if you don’t want to hold Fox News and the Murdochs to account for the sake of democracy, do it for your bottom line.

Good luck! We all need you to prevail!