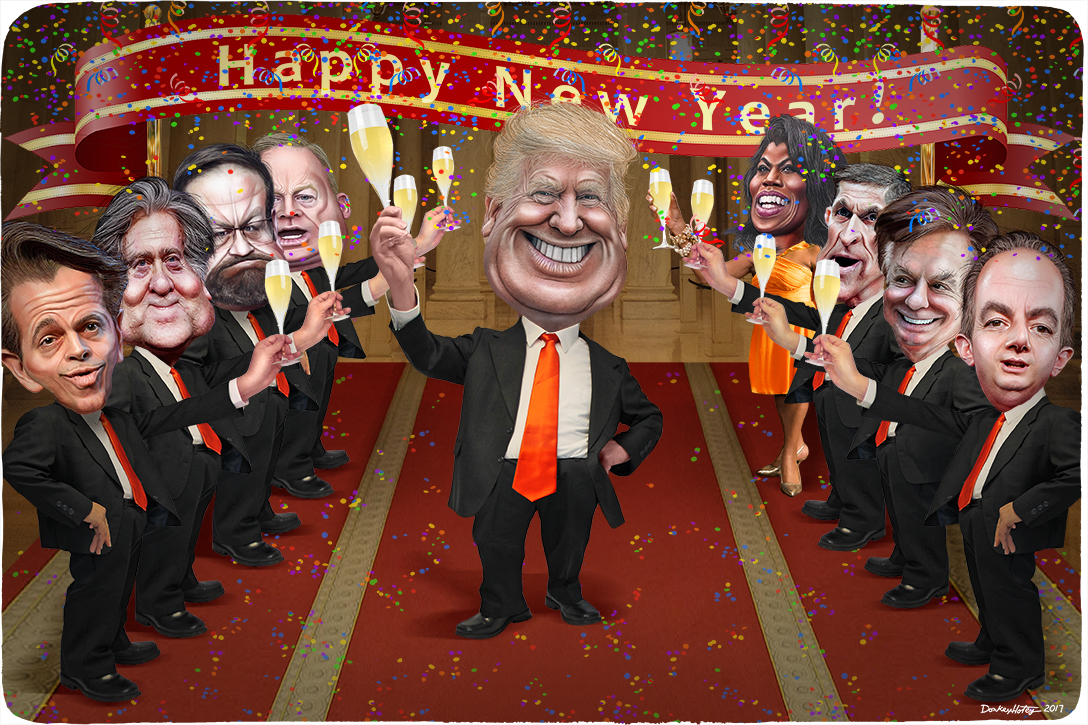 To the best team ever! Only the best. Photo credit: DonkeyHotey / WhoWhatWhy (CC BY-SA 2.0) See complete attribution below.
Cartoon

Our Favorite Cartoon Op-Eds of 2017

The outstanding work of our Images Department, which is headed by an artist who goes by the nom de guerre of “DonkeyHotey,” is the main reason why WhoWhatWhy has such a unique and engaging look.

We are very proud of our daily panoramas and other images, which add a visual dimension to nearly all of our stories. In order to provide another outlet for the unbound creativity of that department and its editor, we decided to run a weekly cartoon in 2017 and supplement it with a sharp-tongued and (hopefully) witty text.

Overall, we are very pleased with this experiment. As the below sampling of some of our favorites shows, we hit Democrats and Republicans alike, and addressed many of the topics most dear to our hearts, such as the systemic voter suppression plaguing US democracy. Congress rolled back Obama era protections against suspicionless drug testing. The targets of these programs are always those less fortunate and not the people making millions off the government. Rigging the rules to put profits above innovation and affordability. It is hard letting go of the reins.

As long as Hillary Clinton keeps talking about the 2016 election, Democrats won’t be able to focus on 2018. She should take the difficult step out of the spotlight. What the Democrats need is more cowbell.

If Democrats want to start winning elections again, simply counting on resentment of Donald Trump won’t be enough. They need new leaders and a bold vision that appeals to all Americans. Congress shall make laws respecting an establishment of religion, and supporting the free exercise thereof.

Is the Separation Between Church and State About to Crumble?

The Supreme Court is one of the safeguards the Founding Fathers put in place to ensure the separation of church and state. But what happens when the bench is stacked with religious zealots? A team of extraordinary liars.

It’s not news that politicians lie. When they get caught, there normally is a political price to pay. Donald Trump seems to be bucking that trend, as his supporters don’t seem to know or care that he plays fast and loose with the truth. I take my religion very seriously. Believe me. Neither snow nor rain nor heat nor court of law stays these couriers from their appointed rounds.

Georgia is the latest victim of Republican state officials trying to suppress votes. Who will stop them? And do they win either way? Is US healthcare really the envy of the world? Statistics and the average American’s pocketbook tell a different story. US leaders love to proclaim their full-throated support for the troops. Yet these same leaders never seem to miss an opportunity to send them to defend “American values” where they are not under attack. The toll on the lives of these young men and women and their families is devastating. Thank you for your service.

While the cost of the War on Terror in terms of taxpayer funds is enormous, it’s US veterans who are paying the highest price.

It’s easy to make fun of the GOP as a party that helps billionaires at the expense of everybody else. But the Republican tax bill shows that the joke is on regular Americans while the rich will be laughing all the way to the bank.

Photo credit for all images above: DonkeyHotey / WhoWhatWhy (CC BY-SA 2.0) See complete attribution on the editorial pages for each image.