It’s tough to get congressional Republicans on the same page these days. They just can’t seem to agree on how many millions of Americans they should kick off health care, nor how much of a tax break to give to the rich. Fortunately, there are some smaller issues they can still unite around … like sticking it to poor people by allowing states to waste millions of dollars testing them for drugs.

Congress quickly rolled back rules promulgated under the Obama administration that protected most Americans from suspicionless drug testing when applying for unemployment assistance. In addition, several states, such as Florida and Wisconsin, either already test welfare recipients for drugs or want to do so in the future.

What’s so important about finding out whether somebody who gets a few thousand bucks from the government has smoked pot in the past six months? Wouldn’t it be much more important to know if the people who make decisions involving billions of dollars are under the influence of any narcotics?

The problem is not just that it is humiliating for those in need to have to prove they are clean to get government assistance. Mandatory drug-testing programs are often declared unconstitutional for violating the Fourth Amendment, which protects Americans from unreasonable searches and seizures.

Such programs are also wildly inefficient. The National Employment Law Project calculated that, in 2015, “states spent more than $850,000 on testing and 321 people tested positive, a cost of nearly $2,650 per positive test.”

To mask the cost of its proposed program, Florida wants to pass on the costs to the potential welfare recipients it is testing, i.e., the Sunshine State wants those in need of help to pony up $40 for a drug test.

But let’s pretend for a minute that there was a way to craft a drug testing program that is constitutional, dignified and not a net loss.

That would still leave a major question: Why exclusively target the poor? What’s so important about finding out whether somebody who gets a few thousand bucks from the government has smoked pot in the past six months? Wouldn’t it be much more important to know if the people who make decisions involving billions of dollars are under the influence of any narcotics?

Certainly all lawmakers should be tested, as well as the president and the entire White House staff. And, of course, anyone who gets a piece of the $500 billion pie the government serves up to contractors. Or the CEO of a company that seeks federal assistance, or tax breaks. After all, that kind of money should only go to people whose judgement is not impaired by nose candy.

But nobody ever proposes these laws, and they would never pass, because it’s not really about saving a few thousand bucks here or there. It’s about punishing those less fortunate for being poor. It’s about treating them as parasites and making sure they know. 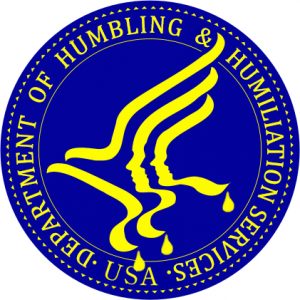 So why not be honest about it?

Let’s not stop at making them pee in a cup. Why not implant a device in the bodies of welfare recipients that doles out electric shocks if they buy anything not related to their bare survival. The current could be adjusted to the cost of the purchase. A movie ticket would give them a minor jolt while the purchase of a TV would hit them with a near lethal dose of electricity.

Another option would be to publish the names and pictures of those seeking public assistance in local newspapers. In addition, they could be forced to wear some sort of patch on their clothing that identifies them as poor. That would allow hard-working Americans to identify and publicly shame them if they try to buy something nice.

Or let’s just go all the way. Why not put in place a program in which welfare recipients are randomly selected to be hunted for sport by those in the top tax bracket?

The possibilities are truly endless once we are honest about what the real intentions of these programs are. After all, welfare recipients have it coming. Every single one of them refuses to pull themselves up by their own bootstraps. So it’s really their fault, and it has nothing to do with the policies of those in power — none of whom are doing drugs, of course.